Stecher is a pending restricted free agent in need of a new contract for next season.
Sep 23, 2020 4:32 PM By: Daniel Wagner 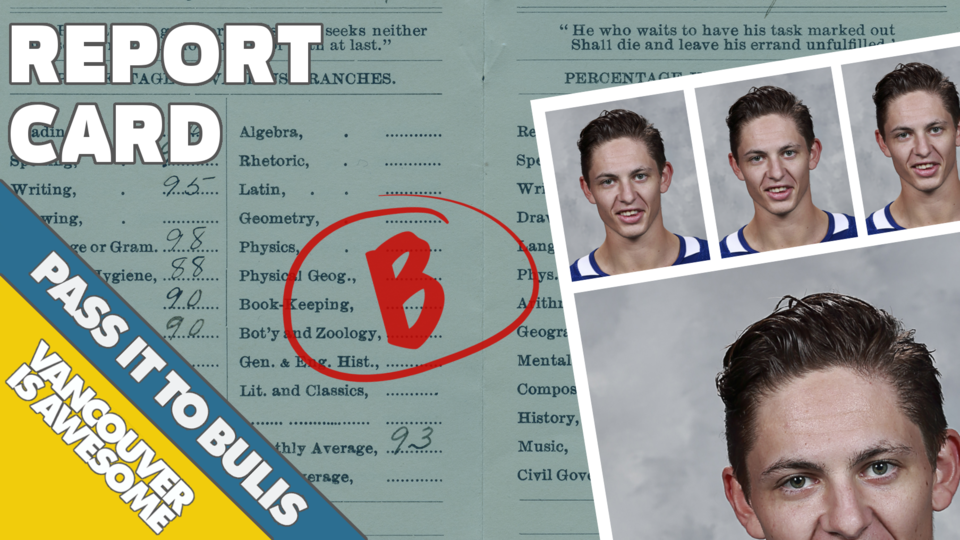 The Canucks have a dilemma on their hands this offseason, specifically their right hands: two of their most frequently-used right-handed defencemen need new contracts. Chris Tanev is a pending unrestricted free agent and could explore the open market, where he will have significant interest from other teams looking to bolster their blue line and penalty kill.

If the Canucks can’t re-sign Tanev, it will be particularly important that they re-sign Troy Stecher, who is a restricted free agent with arbitration rights. What Stecher’s contract will look like, however, is an intriguing question.

The 26-year-old blueliner has never quite nailed down a spot in the Canucks’ top-four, although he always spends plenty of time on the top two pairings when injuries occur. His lack of size has hindered him a little in puck battles down low, though his effort and work rate can’t be questioned. He never became a power play quarterback like his 8 power play points in his rookie season suggested he might and he’s never been a go-to defenceman for the penalty kill either.

In other words, Stecher’s role on the team has never been completely clear. He plays solid defence and moves the puck pretty well, but he’s not really a shutdown defenceman or a puck-mover. So, what is he?

For the Canucks, Stecher has been a solid third-pairing defenceman capable of playing up in the lineup when they need him to, which is a valuable piece to have. The question is whether he can be more than that: an everyday top-four defenceman and a regular penalty killer.

There’s an argument to be made that he should already be playing in that role. Let’s take a look at Stecher’s 2019-20 season in his Report Card.

Stecher put up some modest numbers this past season. He set a career-high in goals with 5 to go with 12 assists in 69 games. That’s not a ton of goals, but it was good enough for third among Canucks defencemen behind Quinn Hughes and Tyler Myers. Not bad for someone that played just 4 minutes on the power play all season.

In the playoffs, Stecher added 2 more goals and an assist for 3 points in 17 games. Those were two big goals in the series against the St. Louis Blues, both of them gamewinners. He scored the go-ahead goal in the third period of Game 1, then bookended the series with the winning goal in the deciding Game 6 on a gorgeous passing play.

Stecher’s Game 1 goal was especially emotional. It was his first-ever playoff goal and he pointed skyward to dedicate it to his father, who he lost this year.

In other words, Stecher didn’t put up a lot of points, but he came through in the clutch during the playoffs.

In terms of ice time, his lack of time on special teams was very noticeable, as he averaged just 15:21 in ice time per game, 7th among Canucks defencemen despite playing in every game this season. He was fifth in even-strength ice time per game.

For those who put stock in plus/minus, Stecher was a solid plus-10, fourth on the Canucks.

Overall, it was a pretty average season for a defenceman by the boxcar numbers, so Stecher gets an average grade: C+.

Stecher’s underlying statistics are an interesting mix that requires a closer look. What’s especially intriguing is that one particular all-in-one statistic suggests that Stecher was one of the most valuable players on the Canucks, while some other statistics paint a more middle-of-the-road picture. 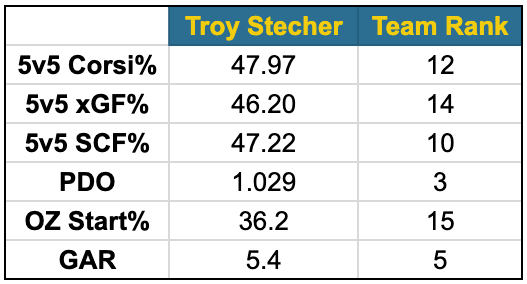 Let’s start with the shot-based statistics, where Stecher was under 50% in each of shot attempts (corsi), expected goals, and scoring chances. That means the Canucks were out-shot and out-chanced at 5-on-5 with Stecher on the ice.

What gets interesting is when we put those numbers into context.

There’s also the matter of his defence partners this season. While Stecher played most with Alex Edler, he played almost as much with Jordie Benn, who seriously struggled this season. It should be said, as well, that Edler’s underlying numbers haven’t been stellar in recent years either.

In Stecher’s 172:24 away from Edler and Benn, Stecher had a 52.6% corsi. That’s mainly with partners Oscar Fantenberg and Quinn Hughes, with a bit of time with Tyler Myers, Chris Tanev and Ashton Sautner as well. Obviously Hughes helps a lot with that, but it should be noted that Fantenberg’s best partner when it comes to corsi percentage was Stecher.

With all that in mind, Stecher’s sub-50% numbers don’t look quite so bad, though they’re still not a positive. What is a positive is his performance by Goals Above Replacement (GAR) from Evolving Hockey, which suggests Stecher wasn’t just good this season, but one of the most valuable skaters on the team.

Elias Pettersson, Brock Boeser, Quinn Hughes, and J.T. Miller were unsurprisingly the top-four Canucks skaters by GAR this season, but it’s a bit surprising to see Stecher come in at fifth behind them. His GAR was 5.4, suggesting he was worth 5.4 goals above a replacement-level player.

Stecher didn’t excel in any one area in his GAR calculation, but was a little bit positive in each area: even-strength offence and defence, short-handed defence, and penalties taken and drawn. Stecher drew more penalties than he took, which is relatively rare for a defenceman, and that gave him a boost over the sixth-ranked Edler, who led the Canucks with 26 minor penalties this season.

Stecher had the third-highest PDO on the Canucks, suggesting that he might have been a little lucky this season. He had the highest on-ice save percentage on the Canucks, so Jacob Markstrom and Thatcher Demko were clearly very good behind Stecher.

That helped his 46.20% expected goals for percentage become a 56.41% goals for percentage. The Canucks outscored their opponents by 10 goals with Stecher on the ice at 5-on-5, fourth on the Canucks behind Elias Pettersson, J.T. Miller, and Brock Boeser, but that can be partially credited to that sparkling on-ice save percentage.

Finally, let’s take a look at Stecher’s isolated impact from HockeyViz, which adjusts for context like competition, teammates, and usage. 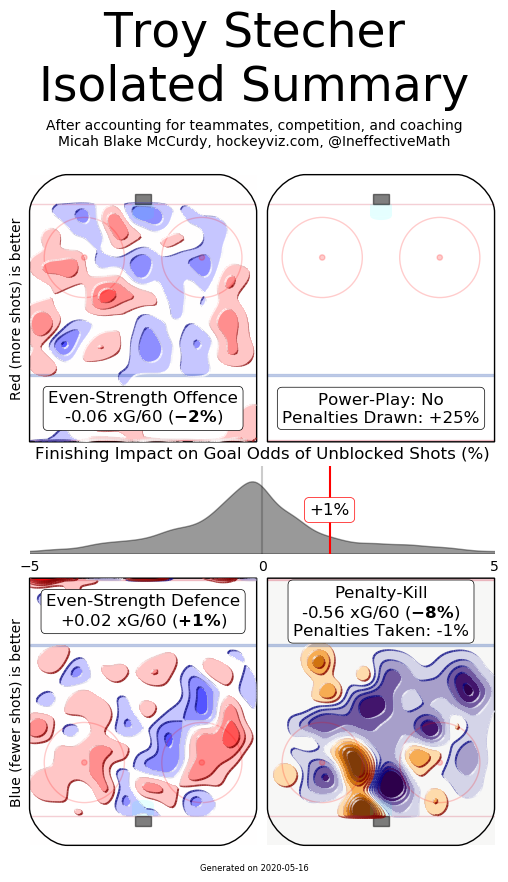 What we see from this is that Stecher’s impact was slightly below league-average at 5-on-5, but well above average on the penalty kill, which we’ll get into later.

Taking all of this into account, he comes close to a nice, average C+, but I’m giving him a bump up to a B- for his excellent GAR and the way he improved most of his defence partners.

Social Studies (Leadership and Intangibles): A-

Stecher may not be an official part of the Canucks’ leadership group — there’s no letter on his chest apart from the “C” in the Canucks logo — but he’s still a vocal leader in the locker room and sets an example with his effort on the ice. His character is exemplary and he shows exactly the type of heart and effort that endears depth players to fans.

It doesn’t hurt that Troy from Richmond has his roots in Vancouver, growing up as a Canucks fan cheering for the West Coast Express. Perhaps that has an effect on the passion with which he plays on the ice, as he wears the same logo he wore as a kid when he was just another fan.

Along with the passion, Stecher has a cerebral approach to the game, devouring video and analyzing every aspect of his game to get better. That sets an example for other players when a 26-year-old is spending that much time going over video.

You won’t find a better and more reliable quote in the Canucks dressing room than Troy Stecher. He’s always willing to give a thoughtful answer to a thoughtful question and is incredibly generous with his time.

For example, one of my favourite articles to write this season was about the Canucks’ signatures, with different players sounding off on who had the best and worst signatures. Stecher was the linchpin for that article. Not only did he not hesitate to name his own signature the best on the team — most of his teammates agreed — but he also went into detail about his own process for designing his autograph, talked about practicing his signature in notebooks as a kid, and needled Quinn Hughes for his signature, suggesting he didn’t have to sign many things at the University of Michigan compared to all the things he had to sign at the University of North Dakota.

Our conversation became the backbone of the article and informed all of my other interviews. That’s just one example among dozens of how Stecher helps Canucks reporters and informs fans.

One of Stecher’s great assets is a fantastic memory — ask him about a specific play and he’ll break it down in detail for you, or correct you on something you might have missed while watching the play from the outside. At the same time, he readily owns his mistakes and will tell you exactly why that mistake happened.

Away from the rink, Stecher has a solid social media presence, connecting with fans primarily on Instagram and occasionally on Twitter. He gets bonus points for his adorable Bernese, Phoebe, who also has her own Instagram account.

It’s never to late to help! Let’s do our part in helping those who need it most. All proceeds from @hockeyhelpsca are going to homeless shelters across the country. #StayThePuckHome https://www.gobardown.com/collections/staythepuckhome

Overall, Stecher is one of the best communicators on the Canucks and gets a well-deserved A+.

Stecher is an elite athlete playing in the NHL.

Stecher didn’t play on the power play and didn’t get a lot of time on the penalty kill either, finishing 13th among all Canucks skaters in shorthanded ice time and sixth among defencemen.

When Stecher did play on the penalty kill, however, he was very good at it, raising the question of why he didn’t get more opportunities to play shorthanded.

As seen in his Isolated Impact heatmap from HockeyViz above in the Science section, shot attempts were 8% less dangerous when Stecher was on the ice shorthanded. That shows up in other shorthanded metrics as well.

Other metrics follow suit: Stecher had the lowest rate of shots on goal against, scoring chances against, and expected goals against. In terms of actual goals, he was second only to Motte in goals against per hour on the penalty kill.

Pretty much every way you look at the penalty kill by the numbers, Stecher is one of the best on the Canucks.

So, why didn’t he play more shorthanded? Perhaps it’s because, as a 5’10” defenceman, he doesn’t look the part. He’s not the best at clearing the front of the net and he can sometimes struggle in puck battles along the wall with larger players. But he has a good stick and is a smart player, which can mean a lot more in shorthanded situations.

Given his limited usage on the penalty kill this season, I certainly can’t give Stecher an A, but I can get him close with a B+.

In many ways, Stecher’s season was a lot better than it may have looked on the surface. Over the past few seasons, Stecher’s ice time has climbed due to injuries, but the Canucks’ defence was surprisingly healthy this season, so he mostly stayed on the third pairing.

Despite that more limited role, Stecher performed well and came through with some timely goals in the playoffs. Combine that with his always-pleasant presence off the ice and it was a solid B season.

REPORT: The Pittsburgh Penguins are interested in Chris Tanev in free agency
Sep 22, 2020 11:10 AM
Comments