Who is Mathias Bromé, the SHL star with reported interest from the Canucks? 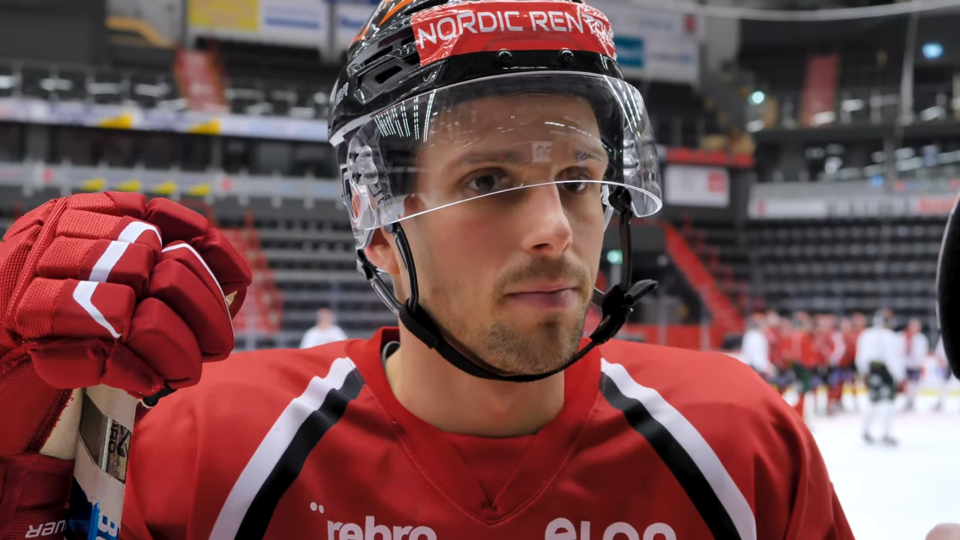 It feels strange that in the wake of the COVID-19 pandemic shutting down hockey leagues around the globe that there could be some normal, ordinary hockey news. Somehow, there is.

Swedish hockey site HockeyNews.se has reported that SHL forward Mathias Bromé will be leaving his club in Sweden. Despite a significant offer from KHL team Avangard Omsk, Bromé is instead looking to the NHL.

The Washington Capitals, Detroit Red Wings, and Vancouver Canucks have all expressed interest and Bromé has reportedly narrowed his choice down to the Red Wings and Canucks.

Bromé confirmed that the Canucks were in the mix to TSN 1040’s Rick Dhaliwal, specifically mentioning Elias Pettersson, who has to be a draw for Swedish players.

The #Canucks are a finalist to sign F Mathias Brome in Sweden according to report by @sjobergh.

I just talked with Brome : “VAN is in the mix, they have interest. I know @_EPettersson is doing great, it is a great city. I am 2 way player who can score and make plays.”

So, who is Bromé and why should the Canucks be interested?

Bromé is a 25-year-old winger, who will be 26 by the start of next season. He comes in a shade under 6’0” and is 181 lbs according to the SHL. The winger led Örebro in scoring this past season with 17 goals and 43 points in 52 games, good for sixth in the SHL in points. He finished three points behind a familiar name for Canucks fans: Anton Rödin.

There was interest in Bromé last season as well, after he had 35 points in 52 games, finishing 18th in the SHL in scoring. The Vegas Golden Knights were reportedly interested in Bromé, but he chose to return to the SHL.

Scouting reports suggest Bromé is known for his speed and skill, while playing a strong two-way game with a high work rate. The Canucks love prospects with a high work rate — it was a frequently-used phrase at the 2019 draft — and they’re also likely interested in adding some low-cost forward options given the cap crunch they could face next season.

Bromé’s speed and skill were certainly on display for this breakaway goal against Lulea in December, as comes flying out of the defensive zone and undresses the hapless goaltender with an abbreviated Forsberg move on a rolling puck.

More recently, he showcased his blazing speed against Leksands IF, finishing off a breakaway with some nifty hands last week.

You can also get a small sampling of his playmaking ability with these two setups against Brynäs. On the first, he takes a pass in front of the net, but doesn’t have the angle to get a shot off, so smartly sets up a better chance with a backhand pass. That shot gets stopped, but is finished off on the rebound.

The second assist comes on the power play, with a nicely-worked one-touch pass from below the goal line. That’s a play we’ve been seeing pretty frequently from the Canucks of late.

As a late July birthday in 1994, Bromé would have been eligible for the 2012 NHL draft, but there understandably wasn’t much interest in him then. He had just 12 points in 34 games in the Under-20 SuperElit league in Sweden and wasn’t on anyone’s radar.

Subsequent seasons didn’t get him much more attention. He had a breakout season in the SuperElit league in 2013-14 with 17 goals and 39 points in 24 games, but he was 19 at that point, with many of his peers already playing in the Allsvenskan or SHL.

It wasn’t until he was 22 that Bromé really broke through, leading Mora to promotion from the Allsvenskan to the SHL. He led Mora in scoring with 18 goals and 49 points in 51 games, finishing third overall in the Allsvenskan in points. Not far behind him were 19-year-old Jonathan Dahlén and 18-year-old Elias Pettersson.

It took him some time to find his stride in the tougher SHL, but there’s no denying that he was one of the best forwards in the league last season. The question is, what is that worth in terms of being a potential NHLer?

Bromé’s age isn’t exactly a red flag, per se, but it should immediately provoke caution. That’s the age when a prospect generally stops being considered a prospect; if they haven’t made the NHL by 25, they likely never will on a full-time basis.

There’s a distinct difference between a 20-year-old forward putting up 43 points in the SHL and a 25-year-old forward doing the same. For the 20 year old, there’s likely still room for development and the 43 points scored while playing against men are a sign of his potential. The 25 year old has little room left for development and the 43 points scored against his peers is likely who he is as a player.

So, what does it mean that a 25-year-old, who produced under a point-per-game in the SHL, wants to make the jump to the NHL? Have any SHLers made a similar jump and had success?

Let’s keep in mind, of course, that most 25 year olds better than the likes of Bromé and his peers would be playing in the NHL or KHL, rather than racking up points in the SHL. Still, it’s a positive. But have any of those 25-year-old forwards gone on to NHL success?

If we look at the top-20 25-year-old forwards from the last 20 years, of which Bromé is one, that gives us a decent sampling of “similar” players. Those are all forwards that have scored at a somewhat similar pace to Bromé.

What we mostly find are players that tried their hand at making the NHL in their early twenties, did not succeed, and moved on to the SHL. That includes Pavel Brendl, who was a fourth-overall pick of the New York Rangers back in 1999, a draft that was notorious for producing busts (other than the Sedins, of course).

There are a few players in this group that tried to make the NHL after a strong 25-year-old season in the SHL. One of them was Niklas Nordgren, who played 43 games for the Carolina Hurricanes in 2005-06, but had just 6 points and signed in Switzerland the next season.

Another one is very familiar to Canucks fans, as mentioned earlier: Anton Rödin.

Rödin wasn’t just good in the SHL at 25 — he was spectacular. He led the SHL in points-per-game in 2015-16 with 37 points in 33 games and likely would have led the league in scoring outright if not for a knee injury that ended his season. Even with the injury, he was named the SHL’s most valuable player.

The Canucks still owned Rödin’s rights and signed him to a one-year deal, but things went wildly awry.

The Canucks played Rödin in two more games before he suffered another setback with his knee, then bizarrely dressed for one more game and spent the entire game on the bench.

While the Canucks re-signed Rödin to another one-year deal, he eventually was released from his contract after seven games with the Utica Comets and returned to Sweden.

The Rödin saga is one of those what-could-have-been stories, as it truly seemed like he was ready for the NHL, but had horrific injury luck as well as some questionable handling of his injury by the Canucks.

If Bromé represents another Rödin, albeit one that isn’t coming off a major knee injury, then he’s a decent gamble. Keep in mind, of course, that Rödin put up 1.12 points per game compared to 0.83 points per game for Bromé.

There are a couple other examples: Jakob Lilja and, if we go beyond the top-20, Joakim Nygård. Both are left-wingers like Bromé and produced points at a lower rate than Bromé at the age of 25, but both have been able to at least play a role at the NHL level.

Lilja had 37 points in 52 games for Djurgårdens in the SHL last season. The Columbus Blue Jackets subsequently signed him to a one-year, two-way contract with a cap hit of $792,500. While Lilja has bounced between the NHL and AHL this season, he’s stuck with the Blue Jackets over the last month, partly due to injuries.

Lilja has played primarily on the fourth line, averaging fewer than ten minutes per game. He’s been decent defensively, but hasn’t contributed much offensively, with just 5 points in 37 NHL games.

The story is similar for Nygård. He had 35 points in 52 games last season for Färjestad in the SHL and was signed by the Edmonton Oilers to a one-year, two-way contract with a cap hit of $925,000.

Nygård has spent the whole season with the Oilers, though he’s currently out with a broken hand. He put up 9 points in 33 games, primarily on the third line. He had a significant two-way impact, however, with his underlying statistics very favourable in terms of creating and preventing dangerous scoring chances for and against.

What’s intriguing about both Lilja and Nygård is just how similar they are to Bromé. They’re about the same size, and are all speedy, skilled wingers known for hard work and strong two-way games. Nygård, in particular, is blazingly fast, likely the second-fastest player on the Oilers behind McDavid.

If Bromé can follow in their footsteps, then he has the potential to be a solid bottom-six forward. If he can sign for under $1 million, like Lila and Nygård, that would be a boon to a Canucks team in need of cheaper bottom-six options than the likes of Loui Eriksson and Brandon Sutter.

Now the question is whether the Canucks can sign Bromé or if he’ll choose the Red Wings instead.

It might seem like an easy decision to choose between a team on the rise like the Canucks and a team that just had one of the worst seasons in recent memory like the Red Wings, but there are a lot of things to consider.

First and foremost is opportunity. With the Red Wings, Bromé would likely have the chance to immediately play in the NHL and possibly even get an opportunity to play top-six minutes. Consider that Lilja mainly got a chance in Columbus because of their injury troubles and Nygård had opportunity in Edmonton because of their lack of winger depth.

The Canucks, on the other hands, have some significant obstacles in place for a player like Bromé to get an opportunity. There are the already-expensive bottom-six forwards on the roster, which aren’t so easily removed from the picture. A top-six opportunity is completely out of the question.

More likely, Bromé would have to start in the AHL with the Utica Comets if he signed with the Canucks. It’s been tough for players from the Comets to get chances with the Canucks this season, with Zack MacEwen the only call-up that has really played at all.

If the Canucks can rid themselves of some salary in the off-season, by somehow finding someone to take Brandon Sutter or Loui Eriksson in a trade, maybe that could open the door for a cheaper bottom-six forward like Bromé.

The Farmhouse: Kole Lind’s resurgence as the most dynamic young playmaker in the Canucks system
Jan 22, 2020 11:07 AM
Comments
We welcome your feedback and encourage you to share your thoughts. We ask that you be respectful of others and their points of view, refrain from personal attacks and stay on topic. To learn about our commenting policies and how we moderate, please read our Community Guidelines.