The Canucks winger has become an advocate for mental health after opening up about dealing with anxiety and depression.
May 10, 2021 3:39 PM By: Daniel Wagner 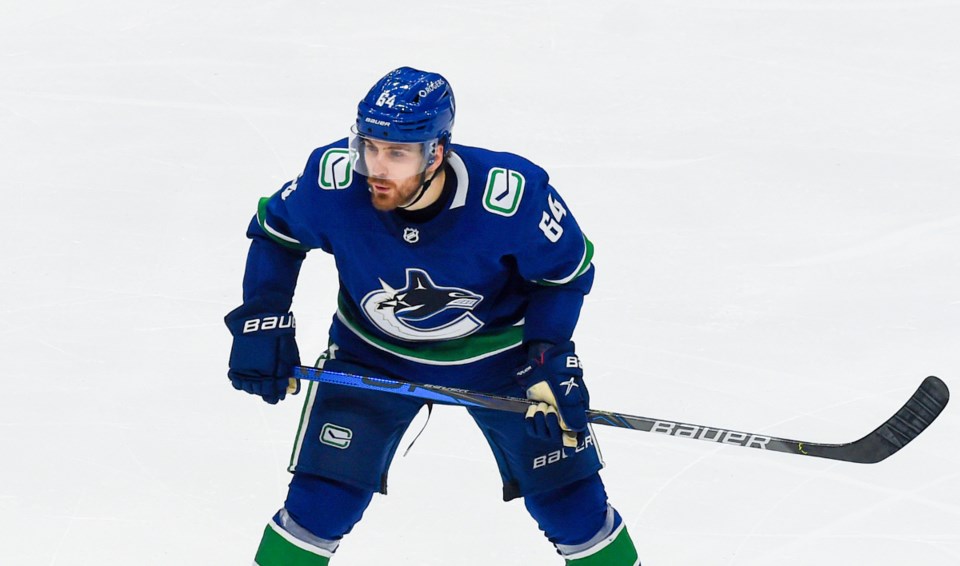 Hockey culture prizes strength and the willingness to play through pain. But sometimes the strongest thing you can do is admit when you need help, which is why Tyler Motte is the Vancouver Canucks’ nominee for the Bill Masterton Memorial Trophy.

The Masterton is awarded each year by the Professional Hockey Writers’ Association to the player who exhibits perseverance, sportsmanship, and dedication to hockey. Each chapter of the PHWA nominates a player from the team they cover, with the Vancouver chapter electing Motte this year.

On the ice, Motte exemplifies perseverance. A goal-scoring star at the University of Michigan, with 32 goals in 38 games in his junior year, Motte had to adapt his game to professional hockey in order to make the NHL.

He became the type of player who coaches love — a tireless worker, who does whatever is asked him, whether it’s crashing in on the forecheck or putting his body on the line blocking shots on the penalty kill. Despite being limited to just 24 games so far this season due to injuries, Motte leads the Canucks with 100 hits and tied for second among forwards in blocked shots.

It’s off the ice, however, where Motte’s perseverance has been most impressive.

"If I could just reach one person...then it was worth it."

Prior to last season, Motte was diagnosed with anxiety and depression after his girlfriend encouraged him to see a psychologist. When he entered training camp, he told team doctors of his diagnosis and asked, “Do we have somebody for that?”

"It was an interesting feeling, to ask someone else for help," Motte said. "But I'm very glad I did."

In admitting that he needed help, Motte got the support he needed and discovered that he was then, in turn, able to help others. He came forward and shared his story publicly as part of the Canucks’ Hockey Talks initiative, started in 2013 in honour of Rick Rypien.

“The reason I wanted to do it was to help somebody,” said Motte about his decision to speak publicly. “Even if I could just reach one person, if just one person could go see someone earlier than I did or if some person could talk to their family about it or ask themselves some tough questions, then it was worth it.”

When Motte shared his story, not even his teammates knew what he was going through. He said he wasn’t worried about being judged by his teammates — instead, it was an opportunity to get more support and help end the stigma that is so often attached to mental health issues.

“In sports, in hockey, there’s this mindset that we’ve come to, adapt to where it’s all about being mentally strong and not showing weakness,” said Motte. “My only input on that is it’s not a weakness. For me, accepting and saying out loud that I was diagnosed with depression and had a mental health issue, that was the first weight off my shoulders.”

In the year since going public with his story, Motte has started Motter’s Mental Health Fund in partnership with the Canucks for Kids Fund to raise money for mental health initiatives and foundations. He’s continued to tell his story and help others understand that it’s not a weakness to ask for help.

“I’m still learning a lot about myself and my own issues but I think I’ve just found that it’s okay to not be okay,” said Motte to Postmedia’s Patrick Johnston. “It’s okay to feel the way you’re feeling and you’re not alone and I think that has only become more clear to me.”

The past year, with a global pandemic that has made it more difficult to connect with others, presents particular challenges for mental health. So many of the support systems or routines that can help manage those issues are missing or harder to find.

“Being in lockdown, spending a lot more time in isolation at home and on the road and things like that gives you almost too much time to reflect on your own mental health and things,” said Motte. “That’s why I think I’ve gotten a lot personally from trying to be there to help others in situations…I find that when I do have conversations with communities, with individuals and in groups, that I think I learn just as much as about myself as I do just trying to help other people.”

“Once I started seeking help and being more open and accepting to my mental illness, I found that my game and my performance increased as well,” Motte told Sportsnet earlier this year. “I was able to turn my focus and my drive and energy back to hockey and my career, and other things in life too.”

Over the last year, Motte has even found a way to do more than just kill penalties and throw hits, but also chip in offensively. He scored four goals in the 2020 playoff bubble and has 6 goals in 24 games this year. That may not seem like much, but that's a 21-goal pace over a full 82-game season and he leads the Canucks in goals per 60 minutes at 5-on-5 this season. Relative to his ice time, Motte has been impressively productive.

Beyond his progression on the ice, Motte’s dedication to being open and honest about his mental illness and helping others who are dealing with similar issues makes him a worthy nominee for the Bill Masterton Memorial Trophy. It’s an honour that he greatly deserves.

“There’s a lot of a lot of guys in this league that are dedicated, that care about themselves and their communities and things and obviously [the PHWA] have rewarded them for different reasons,” said Motte, “but to just be one of 31 guys for one year, it’s humbling.”