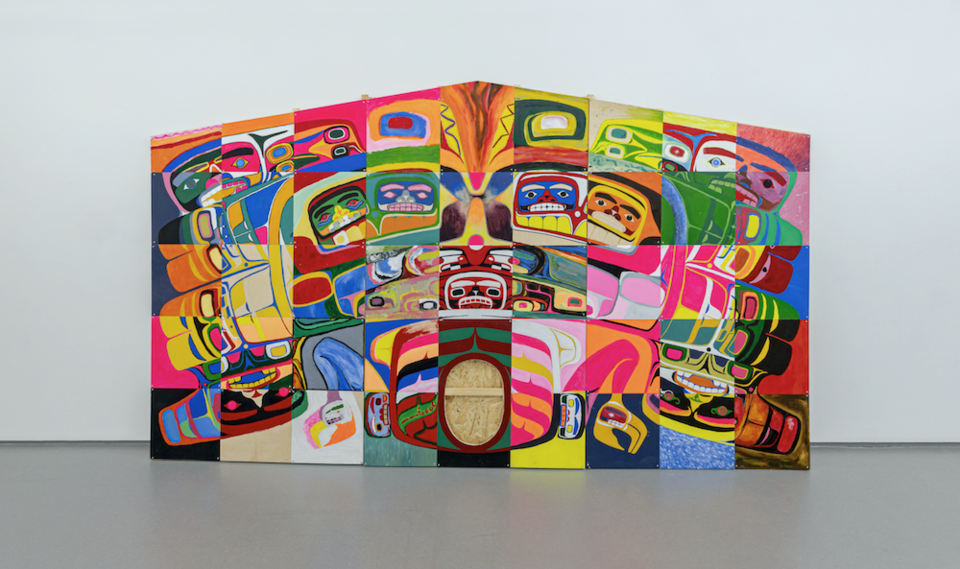 Luke Parnell's 'Neon Reconciliation Explosion' is one of the artworks set to be featured in his multidisciplinary solo exhibit, Indigenous History in Colour. It opens at the Bill Reid Gallery in downtown Vancouver next month.Photo submitted

Canada's only public art gallery devoted to contemporary Indigenous art of the Northwest Coast is set to host an exciting new exhibition beginning next month.

Bill Reid Gallery will present the Western Canadian premiere of Indigenous History in Colour, a multidisciplinary solo exhibition by contemporary artist Luke Parnell. The exhibition, scheduled to open on Feb. 3 and run until May 9, 2021, will serve as "a powerful exploration of the relationship between Northwest Coast Indigenous oral histories, conceptual art, and traditional formline design," according to a release from the gallery.

First shown at MKG127 Gallery in Toronto in July 2020, this exhibition marks Parnell's first with the downtown Vancouver gallery. It features two new large works and eight paintings, displayed alongside a short film and an accompanying totem pole from the renowned artist.

Among these pieces are Bear Mother (2019) a vivid digital print that began as a digital sketch for Instagram and "explores an ancient Indigenous narrative through the lens of pop culture, colour theory, and a striking collage effect," and Re-Contextualizing the De-Consecrated (2014), a series of seven paintings on loan from the Art Gallery of Ontario. Each painting in the series is inspired by a past exhibition.

The short film Remediation (2018), meanwhile, "delves into the long-lasting implications of the removal of ancient totem poles from Haida Gwaii, as a critical response to a Bill Reid documentary produced in the 1950s," according to the gallery. The film depicts Parnell's cross-country journey, during which he carried half of one of his own totems back to the coast, where it was ceremonially burned. The ashes and the remaining half of the totem will also be on display as part of the exhibition.

Arguably the most striking artwork included in the exhibition is also the largest. The gallery described Neon Reconciliation Explosion (2020), as "a collaborative installation that both embraces and questions reconciliation." The piece functions as a Northwest Coast housefront, featuring with a large butterfly design in Nisga’a style divided into 44 individual panels. Those panels were painted by 55 community members using bright, neon colours, and represent each member's personal understanding of reconciliation.

In contrast to the brightly-painted squares, Parnell’s own panel features a a bare, hollow doorway, emblazoned with carvings of the initials CB and TF—the artist's way of memorializing the lost lives of Colten Boushie and Tina Fontaine

To that end, the breathtaking works included in the exhibition provide an "analysis of the shifting perspectives of Northwest Coast art in modern history challenges contemporary discourse on notions of reconciliation and representation today," according to the release.

Said Parnell, “Research and exploration have become the basis of my artistic practice. In order to understand histories and concepts, in order to explore emotion and contemporary events, I create artworks. My artwork asks questions but never answers them.”

Though Parnell was raised in Northern B.C.—his mother is a member of the Wilp Laxgiik Nisga’a, from from Gingolx, B.C. while his father is Haida, from Masset, B.C.—the contemporary artist now works as an assistant professor at the Ontario College of Art and Design (OCAD) University in Toronto. He previously apprenticed with a Master Northwest Coast Indigenous carver, in addition to earning a bachelor of fine arts at OCAD U and a master of applied arts from Emily Carr University of Art and Design.

Bill Reid Gallery joins the list of prestigious locations that have exhibited Parnell's work, including the National Gallery of Canada.

“Indigenous History in Colour invites audiences to engage with the vibrant and dynamic qualities of Indigenous art, while also looking beyond the surface of popularized perspectives,” said Beth Carter, curator of the Bill Reid Gallery, in the release.

​​​​​​Bill Reid Gallery will celebrate the exhibition's opening with a virtual celebration, featuring Parnell and Carter in conversation. The online event will take place via Facebook Live on Tuesday, Feb. 2, 2021 at 6 p.m. PST.