Once facing addiction and amputation, this DTES resident now helps others with recovery

Melanie's story touched me in a way that none ever had before. She brought me to tears as I listened to her incredible journey of overcoming addiction and her road to recovery.
Dec 5, 2018 10:26 AM By: Rachel Way

Mel: From addict to advocacy 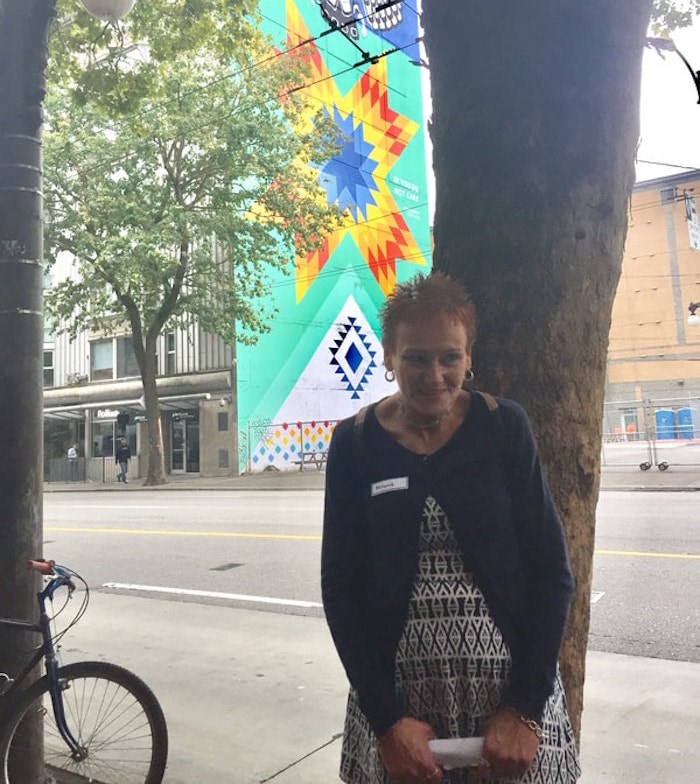 Walking into the "Evening with Innovators" hosted by Employ to Empower, I was feeling kind of like a kid on my first day at a new school. I was relieved to meet a new friend, Melanie (Mel), who began talking with me. I soon realized that Melanie was actually a speaker at the event and was excited to hear her insights. When I told Melanie about my project she shared with me that she was more than happy to share her story in hope that it would build more understanding around addiction and recovery.

Now I must say that Melanie's story touched me in a way that none ever had before. She brought me to tears as I listened to her incredible journey of overcoming addiction and her road to recovery. Her journey with addiction was far from an easy one; Mel's addiction began when she was young. Her father passed away and after tragically finding her mom dead she had no one to turn to and ultimately turned to drugs.

After moving to the Downtown Eastside, Mel became a heroin addict and was constantly looking for her next fix. "I can make a cardboard condo like you wouldn't believe," she shared.
Spending many nights on the streets, Melanie often found herself putting money towards drugs rather than accommodation. "I spent a long time being homeless," she shared.

Mel's years of being homeless started close to when she got hooked on heroin. Her day-to-day life quickly became one of seeking a fix and a safe place to sleep. Melanie reflected back on her first night on the streets, when she was the most terrified she'd ever been. But soon Mel came to learn that the Downtown Eastside was one of the safest places she could've been. "It may not look like it," she shared, "but it sure is." Melanie came to fall in love with the community that helped her through her addiction.

But it was one fateful day that allowed her to realize her addiction problems in the most life changing way possible. Sharing the story with tears in her eyes, she spoke of how she was in and out of coherency doing drugs. She got impatient and decided to do some heroin by herself while waiting for her boyfriend to return home. Unaware that the needle she had used had got stuck in her arm, it began to infect her body. Her boyfriend had been off doing his thing and when he returned home he found her laying on the floor.

"There [are] three things I can remember from that day," she shared.  "One was 'what is that smell?' It was the smell of the infection attacking my body. Second was 'why is there all this water?'--like I've been thrown into a lake, I was drenched in sweat from my body fighting the infection. And the third was my boyfriend screaming someone bleep bleep bleep call 911."

The next memory Mel could remember was waking up in St. Paul's Hospital where she would spend the next three months of her life.

Mel woke up to four nurses holding her down as she cried out as the pain hit her like a ton of bricks. "I kept screaming 'where's my dope?'" she continued. "I almost died and I was physically ill, yet here I was screaming 'where is my drug?'"

She explained to me that heroin is a want and a need:  "it's a selfish habit but you have to do it because you don't want to get sick."

The next few days were a blur for Mel, doctors and nurses, skin graphs, blood transfusions, endless efforts to keep her alive as she fought the infection. It was looking like it was so bad they were going to have to amputate her arm. With no next of kin she was left to sign the papers to give them the go ahead.

But it wasn't until her surgeon came into the room that she realized the changes she could make in her life. The doctor gave her two choices. She could either cut off her arm and go back onto the street and probably die of an overdose, or she could fight for her life.

"The doctor said to me I know you want out and that you have potential but it's now or never." She reflected back on her response of brushing it off, thinking about her next fix. Then with tears in his eyes the doctor looked at her and said "don't you understand? I will take this arm and beat you with it." He knew she had potential and helped her to realize it as well.
"He made me understand that this is my life, this is my reality, and I never looked back."

The doctor reconstructed Mel's shoulder, but with some muscle and nerve damage it still isn't perfect. She paused in her story, adding: "but I got a second chance" and reflected on how grateful she was to have her life.

She told me of the 17 people she's lost to drug overdoses, one of which being her best friend. Her friend had been off drugs for months until her ex-husband had come to town, "a real piece of work" as Mel described him. Not liking to do drugs alone he made her do them with him and that night she overdosed on Fetanyl. "It hit close to home," she shared, "everyone is overdosing and dying these days but I got a second chance," which is something Mel says she is forever grateful for.

What really gets Mel is the age of some of the people she has met through her position at the Overdose Prevention Society. A boy she had met was fifteen, showing there is no age limit to addiction. "He was the nicest kid you'd meet," she attested. He had great manners despite raising himself. He never stole, yet was born with fetal alcohol syndrome and was hooked on heroin. "The poor kid never stood a chance." The last Mel had heard, he was getting treatment and she hopes he is doing well.

Mel shared that after her months of recovery she became very bitter against heroin, not the people who used it but the evil drug and what it does to them. "Now that the shoe's on the other foot and I'm not a hypocrite I can have some empathy for them," Mel said. Feeling this way is why she began working at the Overdose Prevention Society. By turning the hurdle into something constructive, Mel now helps people in a similar situation to what she's overcome. Mel shared how sometimes she wondered why this happens to people, how they managed to fall through the cracks. But she soon learned at the end of the day addiction is an illness and just like any sickness some choose to get treatment and deal with it and some never do.

​I was truly inspired with the stories Mel shared with me. Her story of strength, leadership and friendship has inspired so many. I hope we can all develop a better understanding for addiction and what it means. We need to re-evaluate how we look at addiction and respond with love rather than judgement. I admire Mel for what she has overcome and am excited to see what comes of her next adventure at her volunteer position at the SPCA through Employ to Empower.