Delhi 2 Dublin performs a live New Year’s Eve show on Grouse Mountain, Dec. 31 at 7:30 p.m. Tickets are sold out but it will be broadcast nationally on CBC.

In the summer of 2017, members of the transcendent world music group were sitting in a yurt overlooking a glacier in Alaska.

Delhi 2 Dublin had trekked to the Last Frontier to play a state fair, but found themselves at a crossroads, creatively, after writing songs for half a year. 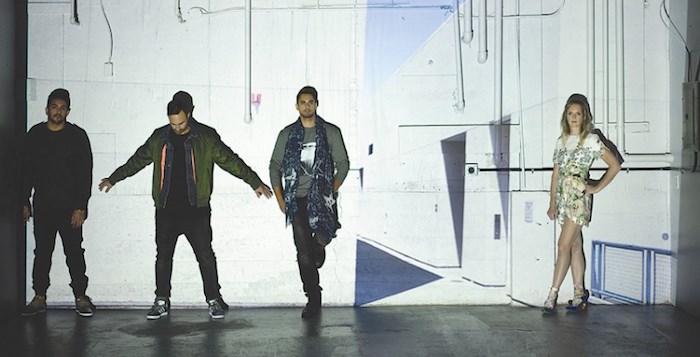 Delhi 2 Dublin will kick off the new year and their 2019 tour with a live show on Grouse Mountain on Dec. 31. The show, which will start at 7:30 p.m., will also be broadcast nationally as part of CBC’s Canada’s New Year’s Eve: Countdown to 2019. Photo supplied.

“We were like, ‘What’s the plan? We need to step up our game or we need to change something so that we’re growing,” says D2D lead singer Sanjay Seran, speaking last week from his home on Galiano Island where he lives with his wife and three-year-old.

Seran has made a home base on the island for half a year now and appreciates the solitude.

“With all the back and forth travel stuff you can just breathe a bit here,” he says.

While the group was focused on laying down tracks for the new album in 2018, there was one highlight from their time on the road: playing the Fillmore, a historic music venue in San Francisco synonymous with the counterculture movement.

This year Delhi 2 Dublin joined the ranks of such artists as The Grateful Dead, The Doors, Jimi Hendrix Experience, The Byrds, The Who, Pink Floyd, Miles Davis and Andy Warhol – all of whom have graced the Fillmore’s auditorium with their talents.

“That was sick,” says Seran, describing the Fillmore show. “The next goal would be to get a poster up on the wall there, which means you have to sell it out.”

Within a decade the group grew from its Canadian roots to having a U.S. and international presence – playing shows on almost every continent. Delhi 2 Dublin has also been on the roster at some of the more notable music festivals in the world, from Glastonbury to Burning Man.

“Burning Man is like every cliché you’ve ever heard – you almost can’t even talk about it,” says Seran, with a laugh, recalling how Delhi 2 Dublin played a head-spinning six shows in 52 hours at the festival.

Still, by 2017 things began to feel stagnant for D2D, and the excitement was waning, according to Seran.

It was clear the group, which had sustained itself on live shows to this point, needed one good song to propel them forward to the next level, to take their sound from the main stage to mainstream radio.

In order to achieve this goal, Delhi 2 Dublin had to get past any judgment of pop music – which often rules the airwaves.

“You need to have pop sensibility there to reach a mass amount of people,” says Seran, explaining what he’s learned. “It’s really easy to dog on pop music … but when you listen to the radio you go away singing something in your head and it gets stuck. You’re like, ‘Oh, *&%# this is good music.’”

Delhi 2 Dublin worked with “well-respected hitmaker” Gavin Brown (Barenaked Ladies, Metric, Tragically Hip) and put their trust in him for the new album We Got This.

Once in Toronto, the group tried to figure how to fit their world into the mainstream pop world – while Brown and his producing team did the same. Concessions had to be made.

“Letting go of what we think is cheesy,” says Seran. “And letting go of those judgements. Just because we were in an electronic world doesn’t make our music cooler in any way.”

Through his coaching, Brown was able to open up Delhi 2 Dublin’s world, while keeping the essence of what the group has stood for since day one, says Seran.

Another shift on the new album is switching the language from mostly Punjabi to English.

Looking at what D2D stands for, comparisons to U2 and using music as a vehicle for change in the world can’t help but be drawn.

“U2 has been a huge influence in my life,” says Seran, who saw the band at BC Place in 1992. “It was the first concert I ever went to and it just changed my life.”

D2D’s new single, “Home (Everywhere I Go),” intentionally released on Dec. 10 – the 70th anniversary of the Universal Declaration of Human Rights – is an anthem for inclusiveness.

What We Got This is not – is a protest album, explains Seran, but rather the songs are designed to evoke a feeling of belonging.

The album tackles anti-immigration sentiment, through lyrical messaging that comes from a place of love and connectivity – and the upbeat sound Delhi 2 Dublin fans have become accustomed to.

Seran felt a shift while playing a show in California, one of the last places he thought he would experience prejudice, just as the new U.S. administration was coming in.

“It gave people permission to look at you and treat you differently than we had been treated before – and we felt it,” he recalls.

Through the process of creating the new album, Delhi 2 Dublin has developed its own decisive genre they refer to as "Subcontinental Pop,” bringing their South Asian influences into the world of Western pop music. Another single is due out in February, followed by another in March, while the album drops in April.

Delhi 2 Dublin will kick off the new year, and their 2019 tour, on top of the world, with a live show Dec. 31 at Grouse Mountain. The show will start at 7:30 p.m. on a stage set up by the mountaintop skating pond, and will be broadcast nationally as part of CBC’s Canada's New Year's Eve: Countdown to 2019.

The New Year’s Eve revellers can expect to hear D2D’s catalogue, along with five songs off the new album.

Seran is looking forward to seeing people ring in the new year standing on a mountain with positive messages and an upbeat vibe swirling around them.

“If we get one of those really clear nights where you can see all of Vancouver – that’s like magical,” he says.