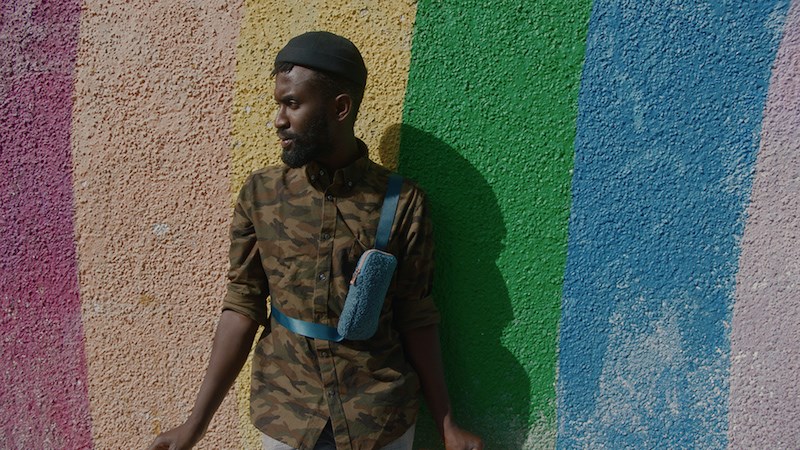 The story of Drake, a gay Ugandan who moves to Vancouver, is told in the new film 'Someone Like Me' screening in May as part of the DOXA film festivalNFB

“We’re not rescuing. We’re not saving. We’re walking in solidarity with them.”

So says Rainbow Refugee’s Chris Morrisey in Sean Horlor and Steve J. Adams new film Someone Like Me chronicling of a group of Vancouver strangers who come together to sponsor Drake, a gay refugee fleeing persecution in Uganda. “This is her life’s mission and it’s incredible,” Horlor said of Morrissey’s work depicted in the film premiering in Vancouver’s 2021 DOXA Documentary Film Festival May 6-16.

But, it’s not just the tale of Drake, afraid of being killed for who he is in the virulently homophobic central African country. Through it run parallel threads of members of the circle working to assist him.

Kay is an immigration lawyer on their own journey as a transgender person waiting for surgery. David is struggling in a job search. And, Marlon has fled Toronto looking for a better life as a gay man in Vancouver.

“The thing we started seeing moment after moment were parallels, the search of freedom,” Horlor said.

Each of those individual journeys is juxtaposed against Drake’s voyage to Vancouver where he must deal with finding work, living as an out gay man and dealing with racism.

Horlor and Adams met with five different groups before settling on the group that would eventually assist Drake. When time the filmmakers got involved, the circle didn’t even know who it would be helping.

One stopping point on many refugees’ trips is Kokuma Camp northern Kenya with 180,000 people, many being LGBT from Uganda. Some of those LGBT refugees were victims of vicious attacks

“They’re desperate,” Michael, a Rainbow Refugee mentor said. The hard part is we can only help a few of them.”

The first thing the group needed to do was fundraise about $20,000 for Drake’s first year in the city. Once that was done, the process of picking someone to assist arrived. The circle was given three candidates.

In the end, it went to a vote.

Michael said most people just getting into assisting a refugee don’t realize the enormity of the process on which they are embarking.

“I think most people come into this thinking it’s going to be some kind of big party and they’re going to have to do some fundraising and greet the person at the airport and that’ll be it,” he said. “They don’t realize these people are escaping real horrific scenes. You don’t just flip a switch as you arrive in North America.”

But, he said, with gay refugees such as Drake, there is an added issue. “You start to think about how much you’ve given up. Language, culture, family, place,” Drake said in the film. “You give it all up because of this one piece of who you are.”

“Sometimes, I get fed up of trying,” he said. “The only thing you don’t lose is hope.”

“The excitement of being here left me a long time ago. Right now, I just want to be comfortable in my own skin.”

Drake’s arrival at Vancouver International Airport to be greeted by circle members bearing balloons and signs is not in the film. The rules around assisting newcomers stress Horlor and Adams needed Drake to ask to be a part. Indeed, circles that assist newcomers are told to place no expectations on those they assist.

But, when he found out about the film project, Horlor said Drake’s words were, “’I want to help do this film if it helps someone like me back in Africa.’”

“Sometimes I miss it,” he said of Uganda. “I had built a life there.”

With his arrival in Vancouver, a bank account was opened, a cell phone set up. The housing search continued.

But, Drake arrived during the pandemic and its accompanying restrictions leaving some group members worried about his expectations of Canada not being met or
loneliness in a new place with little chance to meet people due to pandemic rules.

It led to uncertainty about jobs, socialization concerns.

Some of his behaviours began to offend circle members. And that necessitated changes in the group.

Some members said what he did was none of their business, that dealing with the circle was more frustrating than engaging with Drake.

But, said Michael, this issue “goes directly to the newcomer’s agency. They are an adult. They are a person, you know, who has survived a lot of stuff. It’s not our job to tell them you have to do this, you have to do that. It’s just not our role. Our role is to support, to advise but not to control.”

The circle’s role is to assist, not to judge, Michael said.

Two members left the group, others became less active in the sponsorship process.

“We have a saying in our language,” Drake said. “Whatever grows, bends. If you try to straighten it, it breaks.”

And, said Kay, as month 13 approached and the time for Drake to move forward without the immediate support of the group, the shift could be “jarring.”

“The world is much different than we started all of this,” Kay said.

“I think he’s well-positioned,” Michael said. “I think you guys have done yeoman service through a very, very difficult period.”

Drake made friends with fellow refugee Conrad in Nairobi, Kenya was on the Lufthansa flight to Canada with Drake.

“Leaving Nairobi, it was like a miracle,” Conrad said. “The moment we got on the flight. Drake was, like, the happiest human being I have ever seen in my life.”

And, over dinner a month after his arrival, Drake said, “I never expected this love.”

However, racism eventually reared its head.

“It hurt me,” Drake said. “Couldn’t sleep. Couldn’t open my window at first.”

“Life has never been fair,” he added. “It will eventually pass.”

The film’s trailer can be seen online.