Three Indigenous carvers are involved in a Vancouver School Board project that will see three welcome posts erected at three sites across the city.
John Kurucz Apr 10, 2019 3:25 PM

James Harry needs to cut deep in order to bring out the light.

Flanked by an adze, a chainsaw and a slick, Harry is outside the Vancouver School Board office on a late winter day when the Courier visits. 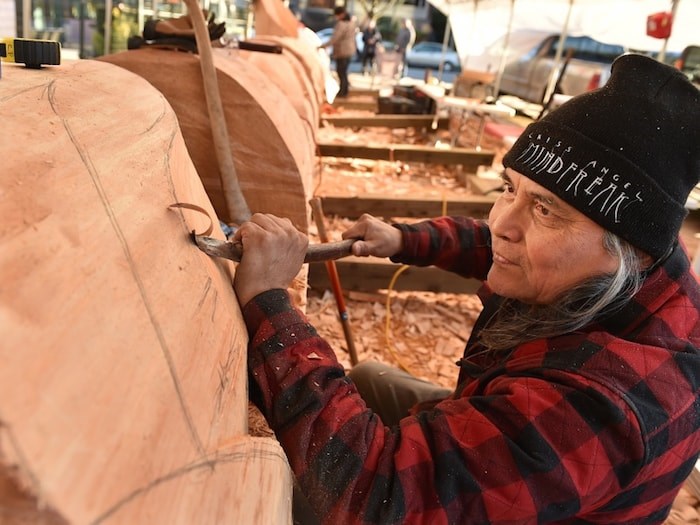 artist Xwalacktun is teaming up with his son James Harry and school-aged kids from across Vancouver to carve a 44-foot welcome post that will be erected outside the Vancouver School Board office. Photo by Dan Toulgoet.

He carves several inches into a pristine piece of red cedar, first removing the outer bark, then the inner bark to reveal a palette of red and yellow hues emblematic of one of B.C.’s most revered types of wood.

Estimated to be around 300 years old, the tree was in the ground for decades before the Spanish, and then the English, first entered B.C.’s coastal waters.

That same piece of wood will tower over Vancouver’s skyline for generations, long after Harry and every other living Vancouverite is gone.

“This tree is so old, working with it is very meditative,” Harry said. “As soon as you get into the deep parts of the tree, you’re reading into the past. It’s a very spiritual connection.”

Rather than simply shaping and cutting a piece of old-growth timber, Harry is quite literally carving a legacy. 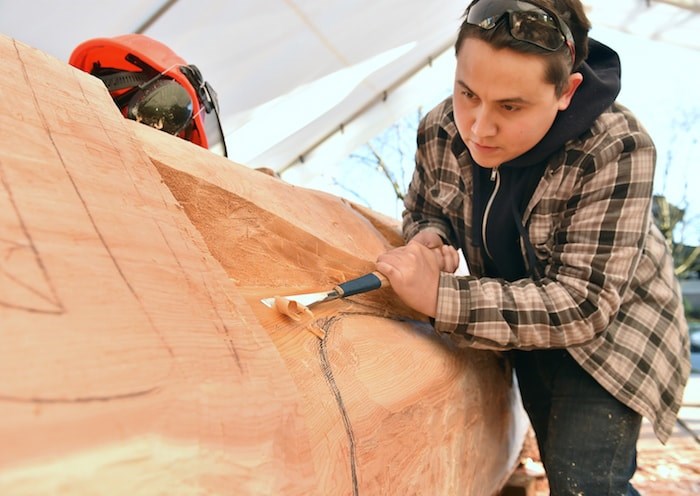 Squamish First Nation artist James Harry and his father Xwalacktun are teaming up with school-aged kids from across Vancouver to carve a 44-foot welcome post that will be erected outside the Vancouver School Board office in late June. Photo by Dan Toulgoet

Alongside his father, Xwalacktun, and two other Indigenous artists, Harry is involved in a VSB project that will see three welcome posts erected: a single, 44-foot post at the district office on West Broadway, and two others measuring roughly 20 feet each at the carving pavilion adjacent to Britannia secondary.

Members of the Musqueam Indian band — Chrystal Sparrow and William Dan — are carving the two pieces at Britannia, while Harry and his father, members of the Squamish First Nation, are crafting the 44-foot centrepiece.

All three welcome posts will be unveiled as part of National Indigenous Peoples Day events on June 21.

“My vision, my dream, is that these pieces are going to be medicine for our children for the next 150 years,” said Chas Desjarlais, Vancouver’s district vice principal of Indigenous education. “Cedar is looked at as medicine in Coast Salish culture, and I see it as medicine, too. This medicine is going to inform our young people going forward about the strength and resiliency of Indigenous peoples.” 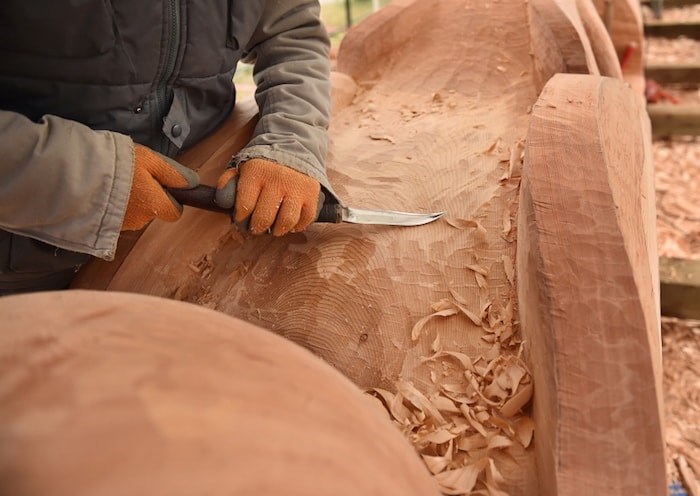 Harry and Xwalacktun’s piece is divided into thirds, with father taking the top portion and son accounting for the bottom. School-aged kids will inform the middle part of the post as the school year progresses and they learn about Indigenous themes and customs.

Harry’s portion shows a bear holding onto a female figure, while an eagle sits above. The female is a teaching figure and the bear represents protection.

“We talk about the eagles as our grandfathers,” Harry, 29, explained. “The eagle can fly so high, it’s considered a messenger to the creator. The eagle can often transform into a thunderbird, a mythical creature, and convey those messages to our ancestors.” 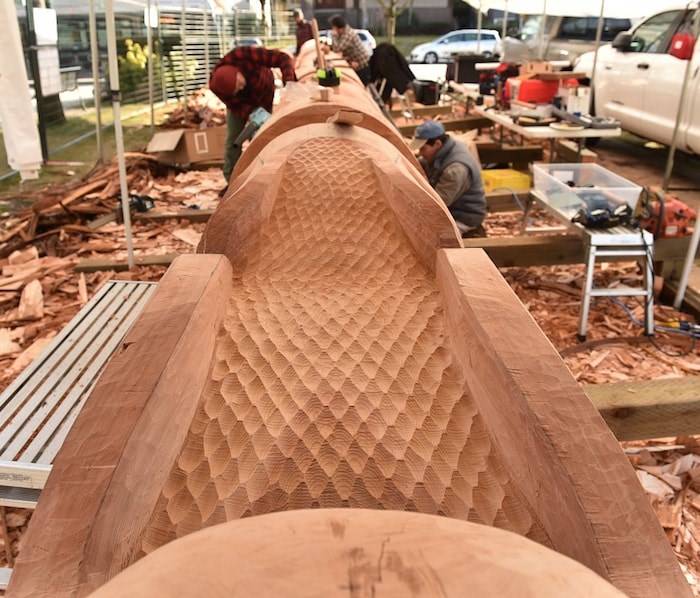 Xwalacktun’s contribution to the post sees a thunderbird reaching over a globe, symbolizing the need to preserve the natural world. The inclusion of a frog conveys notions of ancient wisdom.

At 61, Xwalacktun has carved since his childhood and taught Harry since the age of five. Paying it forward to younger generations is a central theme to all three posts and came up repeatedly in each interview the Courier conducted.

“We have to meet in the middle if we’re talking about truth and reconciliation,” Xwalacktun said. “On this centre part, we’re going to represent all groups of people, students and community members. Anyone can have their input.” 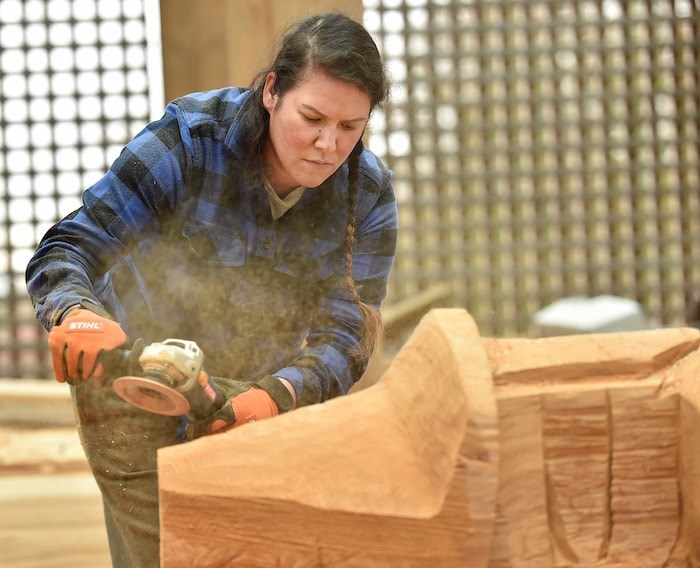 Chrystal Sparrow is one of four Indigenous artists tasked with carving a trio of welcome posts that will be erected outside the Vancouver School Board office and at the carving pavilion adjacent to Britannia secondary. Photo by Dan Toulgoet

The project’s genesis came last year, not by board directive, but rather informal conversations among district staff. A request for proposals was sent to three local First Nations — Squamish, Musqeuam and Tsleil-Waututh — along with rough parameters for the end goal: decolonizing Vancouver school properties, highlighting reconciliation in education, gender balance in the artists and posts themselves and bringing local customs to bear.

Students from across the city visited the carvers throughout March and April to provide ideas and guidance for the middle portions of each piece. The leftover shavings from each carving will be repurposed into smaller art pieces for students, or burned off in a ceremonial fire.

The project budget is about $200,000, and as Xwalacktun points out, the finished works will not be totem poles. 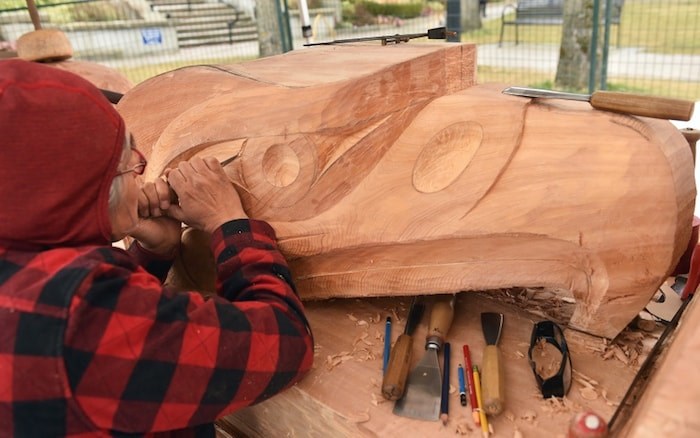 “The Salish people here, we’re not totem pole carvers, we are house post carvers,” he said. “The three poles represent mind, body, spirit. You need all those three things to be a whole human.”

Chrystal Sparrow’s welcome figure plays on a similar marriage of the past and present, with an eye on intergenerational knowledge. Four generations of her family were fishermen, whether for food, custom, or commercially.

Her piece is a female figure adorned with a cedar hat and cloak, while imagery depicting salmon and orca are woven throughout. The cedar patchwork represents numerous Indigenous customs and the figure is all things woman — mother, grandmother and sister. 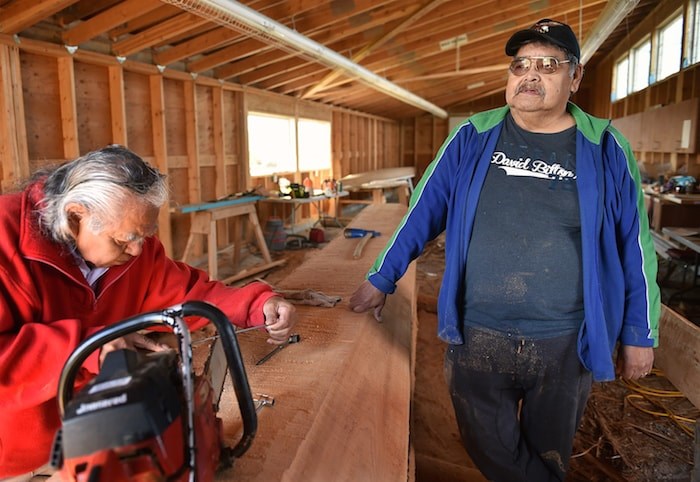 Musqueam Indian band carver William Dan, at right, works on what will become a 20-foot welcome post at the carving pavilion adjacent to Britannia secondary. Photo by Dan Toulgoet

“To me this is a great opportunity, not only as female carver, which there aren’t very many of, but this is an opportunity to share my view of my family history with orca and salmon,” she said.

Chrystal’s history is such that her great grandfather inspired her, her dad began teaching her and her brother Chris, a semi-master carver, is now helping to refine those skills.

“When people see my art, they smile and they love it,” Chris said. “I like that my three kids are going to grow up seeing this. It will always be there.”

At 69, William Dan is the eldest carver of the bunch. His great grand uncle was Chief August Jack Khahtsahlano, whose anglicized surname became the namesake for Kitsilano.

Dan completed his fist carving, a 10-inch piece blending eagle and bear imagery, when he was 12.

“It was elation. I gave it my grandmother,” Dan recalled.

His contribution to the project will be the accompanying male figure that stands alongside the Sparrow siblings’ work at Britannia. Dan’s post will show a man with outstretched hands, gifting salmon to those around him.

“When the kids come by, I’ll put in an orca, a salmon, or whatever they want,” said. “That way they can step back and say, ‘I did that.’”