Buildings such as the Jewish Community Centre, King David high school and Temple Sholom synagogue are among landmarks in the Oakridge neighbourhood, but alongside their architectural importance, it’s the history and stories associated with them that help imbue them with life and meaning.
0
Feb 17, 2019 9:30 AM By: Naoibh O’Connor

Buildings such as the Jewish Community Centre, King David high school and Temple Sholom synagogue are among landmarks in the Oakridge neighbourhood, but alongside their architectural importance, it’s the history and stories associated with them that help imbue them with life and meaning.

Michael Schwartz, director of community engagement at the Jewish Museum and Archives of B.C., will host a walking tour of the area Feb. 24 to share how such buildings provided foundations for the community. The walk is among several events Vancouver Heritage Foundation is holding to mark Heritage Week, which runs from Feb. 18 to 24. 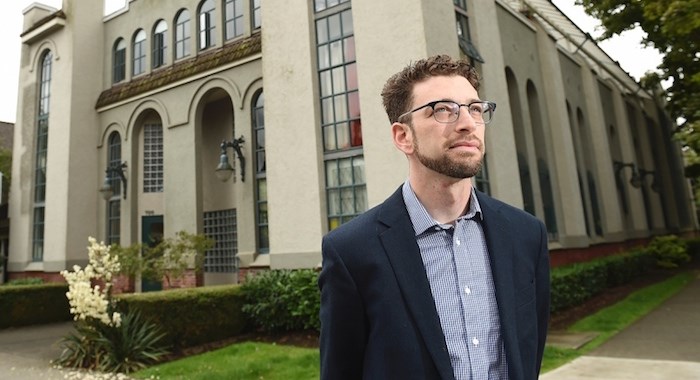 “The Tie that Binds” is the theme of this year’s Heritage Week, which is celebrated in B.C. and across Canada.

Kathryn Morrow, Vancouver Heritage Foundation spokesperson, said the idea behind the theme is to look beyond places or landmarks and think about intangible heritage such as food, storytelling, music and culture, which add community and a sense of belonging to a place.

“It’s important to be able to relate to a place. For most people, it’s easier to feel connected to a location, building or a site if you have a personal history that’s related to it…” she said. “If there’s something that makes it more significant, more personal to your own life, you’re more likely to be attached to a place.”

Schwartz said his organization, whose mission is to collect and preserve the history of Jewish life in B.C. going back to the Gold Rush, frequently offers walking tours in various neighbourhoods populated by the Jewish community over the decades.

While the Jewish community emerged in Strathcona and Gastown around the turn of the century, the population moved to Fairview in the 1930s before shifting to Oakridge in the post-war period.

Community institutions such as the Jewish Community Centre, which had been located at Oak and 11th, moved to a new site at 41st and Oak in 1950.

The construction of the mall in the late 1950s created an anchor for the new residential neighbourhood and, over the years, places such as King David high school, Temple Shalom synagogue and the Peretz Centre emerged.

Schwartz’s tour will address the movements of the Jewish population within the city and how notable buildings reflect the roots of the community.

“We’re going to talk about the waves of community growth and the way the community outgrew a neighbourhood and moved on to another one,” he said, while adding, “It’s what happens in those buildings that’s far more important than what they look like from the outside. Things like schools, community centres, synagogues are places where we educate the next generation, where cultural traditions are passed on. In some cases that is religious, but more broadly speaking it’s cultural — the food, the literature, and what it means to be part of the community.”

Based on previous tours, Schwartz said while many people have a broad sense of the history of the neighbourhood, they may lack knowledge of the details and he has many anecdotes to share.

He’s not surprised by holes in people’s knowledge, however, as the Jewish community only makes up about one per cent of the city.

“That’s pretty tiny. So I can appreciate people haven’t encountered the Jewish community or aren’t aware of our history,” he said.

But Schwartz maintains it’s crucial for Vancouverites to understand how the city has changed and grown through the years.

“It’s important for Vancouver to understand how young the city is and how different communities have made a home here, especially in a time when real estate and property value are such volatile subjects and people are quick to accuse certain communities of disrupting things and making it difficult for other people to continue living in the city,” he said.

“It’s important to have a broader perspective, a more long-term perspective on that, because it’s always been the case… there’s always been different communities arriving and shifting. To think that some neighbourhoods are sacrosanct, that some people should always live there, is just against the nature of how a city as an eco-system grows, changes and evolves.”

More information and tickets are available via the Vancouver Heritage Foundation.

Note: The Oakridge walking tour is at capacity, but Vancouver Heritage Foundation has started a waitlist.