Vancouver Is Awesome is co-presenting an arts initiative in Vancouver called Penny Smash! Todd Falkowsky (of Citizen Brand and The Canadian Design Resource), Scott Hawthorn (of Salt Tasting Room, Native Shoes and Picker Shack Orchard), designer Tyler Quarles and I have been working for the past few months on producing a Vancouver pilot for a project that Todd launched in Toronto a couple of years back. The idea behind PENNY SMASH is to take a souvenir penny press machine (like the ones you see inside tourist attractions - like THIS) and hijack it to produce truly affordable works of art. ALL of the proceeds go either to charity or grants to artists to launch other creative projects in the city.

The first Penny Smash Vancouver machine launches this coming Friday, November 4th at FUSE at the Vancouver Art Gallery and for just $2.01 (on top of your admission to FUSE) you'll be able purchase work from the machine by some of Vancouver's favourite visual artists including Ken Lum, Ian Grais, Jerszy Seymour and Natalie Purschwitz. First I SHOWED you Ken Lum's "Monument for East Vancouver" design, THEN Ian Grais and his "Vision Token" penny and today it's time for Natalie Purschwitz and her "Button" penny! 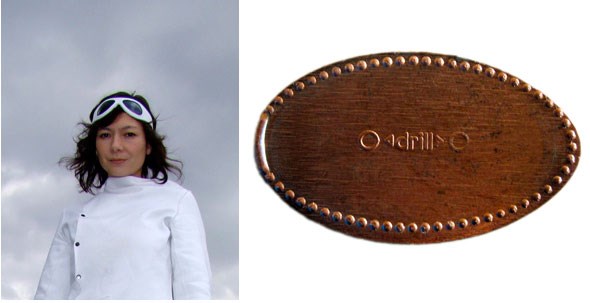 "I like to use wearables as a starting point. This design is a pattern to make your own squished penny buttons."

Seeking out spaces between art and design, performance and daily life, Natalie's work begins at the intersection of human needs and gratuitous objects. Founder of the clothing line Hunt & Gather, the Makeshift Project, and Thing to Thing, Natalie has shown work around the world. Always smashing boundaries, she proves even a penny can be transformed from currency to fastener and accessory.