STICKY: A Post-it Note Art Show is an event that democratizes art and art spaces in a city that’s struggling to keep up in those areas.
Mar 27, 2019 3:02 PM By: John Kurucz

The best, and at times, worst part about art is that it’s whatever you want it to be.

Colour outside the lines? That’s cool. Paint a bunch of genitals in the Sistine Chapel? Go for it. Record a one-second song? Expect it to become a revered classic. 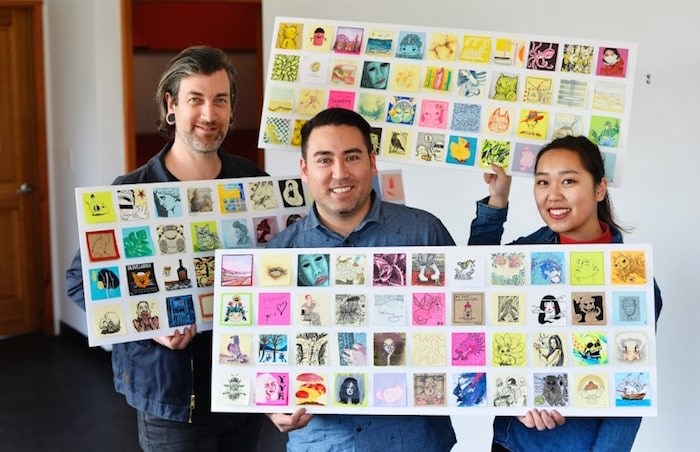 Chris Bentzen, Jeff Chiba Stearns and Flavia are the co-organizers of this weekend’s STICKY: A Post-it Note Art Show at the Arts Factory. Photo via Vancouver Courier

It’s following this line of thinking that brings Vancouver STICKY: A Post-it Note Art Show on March 30. Hosted at the Arts Factory on Industrial Avenue, the tiny canvas art show will feature nothing but doodles and drawings on three-inch Post-it notes. A few hundred artists are expected to take part, with some works coming from as far afield as Germany and the U.S.

Alongside fellow artists and curators Chris Bentzen and Flavia (she didn’t give a last name), the trio has purposely created an event that democratizes art and art spaces in a city that’s struggling to keep up in those areas.

For starters, the show is free and each piece of art is $20 a pop. Those who can’t afford large palettes, art supplies or art space get their feet in the door for little up-front costs while also having hundreds of eyeballs on their work.

The show’s parameters largely complement that DIY aesthetic as well. Each artist must submit six pieces of work, and they must all be on the same type of three-inch, by three-inch Post-it note. Pencils are a no-no (they smudge too easily) as are diptychs or triptychs.

The final rule, in case it needed to be said, is anything promoting hatred or intolerance won’t be accepted.

A number of pieces that’ll be in the gallery space were shown to the Courier, and the output is all over the map: portraiture, collages, floral patterns, human-like figures and, of course, cats.

“Even non-artists think it’s a great idea, because prices are $20 each and they can buy some original pieces of art that are super accessible and super fun to create,” said Bentzen, the head honcho behind Vancouver arts events company Hot Art Wet City.

South of the border, there’s been an annual Post-it note art show in Los Angeles for the last 14 years. Flavia took part in the American version, got the blessing from the U.S. creators and away the group went.

An Emily Carr grad who majored in illustration, Flavia can bang out Post-it note doodles in 20 minutes — not bad, considering a potential sale translates into roughly $1 per one minute of work.

“He’s a complete inventor,” Chiba Stearns said. “He looks like that 80-year-old inventor with the glasses and he’s the rock star of 3M. He’s made that company if not billions, then millions and millions of dollars. His license plate says Post-it.”