THE OPENING is all about introducing the fascinating, quirky and wonderful people working in and around the visual arts in Vancouver.
0
Sep 22, 2011 10:00 AM By: Anne Cottingham 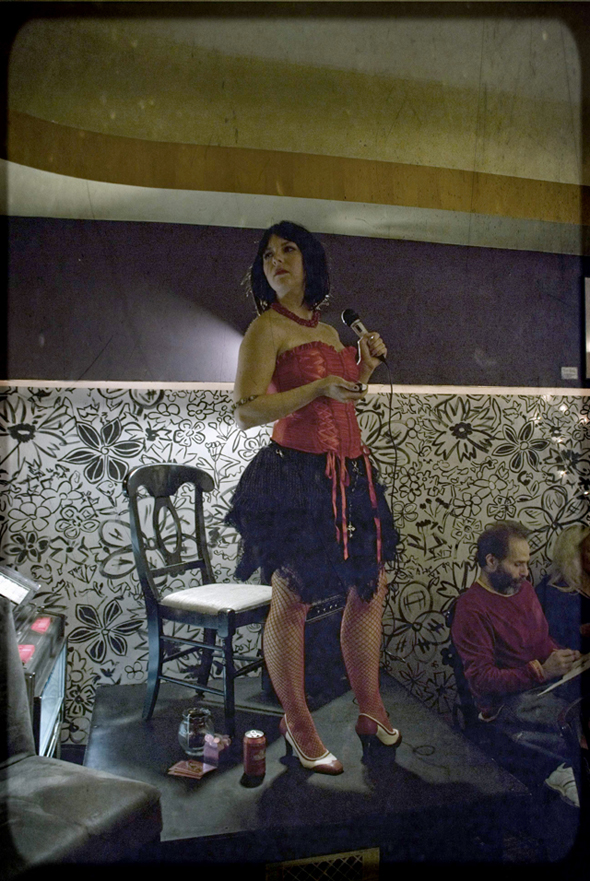 When Shary Contrary first emailed and invited me to attend a Dr Sketchy show, I'll admit I initially hesitated. My drawing ability amounts to stick figures and cute round bunnies... not curvy burlesque models draped in lace. But Shary insisted that the show was for all abilities, so I showed up at The Wallflower on a Sunday night, pencil in hand. I found a delightfully eclectic mix of people - from anime aficionados to well-known Vancouver artist Neil Wedman, all crammed into the booths and tables sketching a black clad model furiously while a Charlie Chaplin movie played in the background. It was so much more exciting than the drawing classes I had taken in art school! So Shary and I met a week later to discuss the origin of Dr Sketchy's Anti Art School over glasses of red wine. 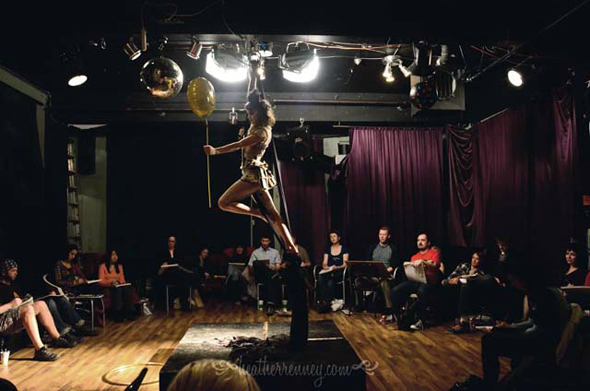 Tell me a bit about the history and origin of Dr Sketchy.

It was started I think in 2005 by Molly Crabapple in New York. She just had this little idea. She had modeled as a life drawing model and found it really boring and very serious. So she had this idea to combine cabaret with life drawing, and it just took off! Her sessions started going every week. Then one started in Australia, and then from there they just started sprouting. I would always go to the burlesque shows here to draw and to get ideas from the girls on stage. I was the one in the audience with the sketch pad. My friend moved to Australia and she found the Dr Sketchy’s there and sent it back to me and said ‘You should do this!’ I just thought, no way! But it was the kind of thing that I would really like to go to. So I thought about it for a year and no one seemed to be doing anything like it in Vancouver, so I finally just wrote Molly one night and said that I though it would be a great thing to bring to Vancouver. She wrote back the next morning and said “You think you can do this? You got it!” I started the first show in September 2008. There were 30 people at the first show and we were at the back of the Jupiter Lounge. Then 40 people at the next one - too many to fit in the back room! So I’ve moved around to different venues - Pat’s Pub, The Fall, The Beaumont, Guilt & Company for a while. Then we started doing it regularly at The Wallflower in 2009 and that’s become our regular once a month space since then. Every now and then I do an extra event, usually through the fall and the winter I’ll try to ramp up to two a month. It’s going really good!

So burlesque has always been involved then?

Yeah! I would go to the shows to find performers to do the modelling. I was the artist in the audience. I knew who I wanted to get and I knew how I wanted to design the shows. I was really just inspired by what I would like to participate in. 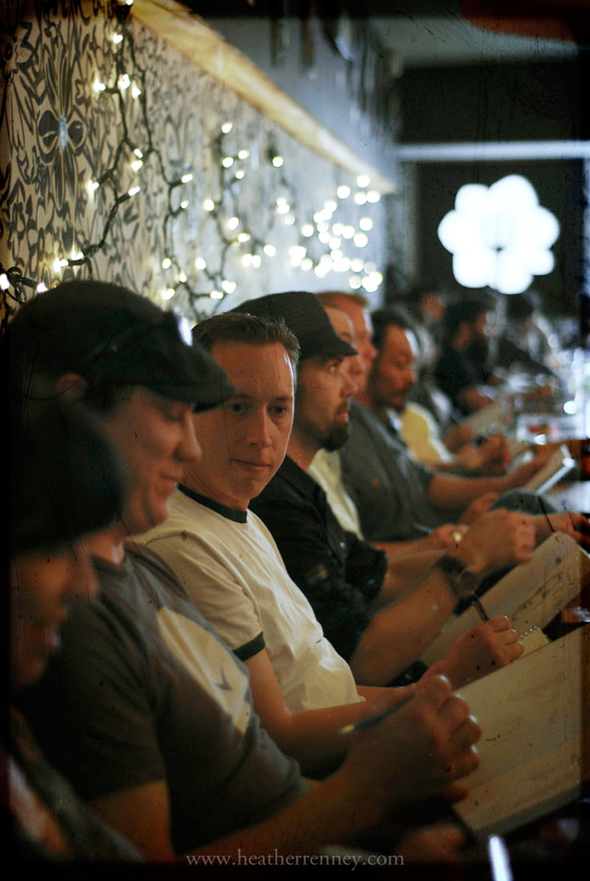 Tell me a bit about your background and how you came to be that woman in the audience with the sketchpad.

I was working in visual effects and surrounded by artists. I’m a painter, so I would go to burlesque shows for ideas. I like theatre too, so it was sort of my opportunity to get into that in my own way. I’m sorry, it’s so hard to talk about yourself!

Don’t worry about it! How do you choose themes for each event?

Often the models come up with them. It’s really their creativity that the show is based on. A lot of times they make their own costumes. If they have an idea that they want to pitch to me, sometimes they do it around that idea, or sometimes they have a theme that they always perform. I design all the music around whatever the theme is and try to bring the costumes and everything altogether.

So for instance, the night that I attended [Charlie Chaplin], did you choose the film to go with the theme?

Well Connie [the model] wanted to do a cross-dressing character, so it was her idea to do Charlie Chaplin. We found this film that had both a girl and a guy. Simply because we have the TV right there I often just put up films and play them in the background and that’s kind of like the soundtrack to the show. 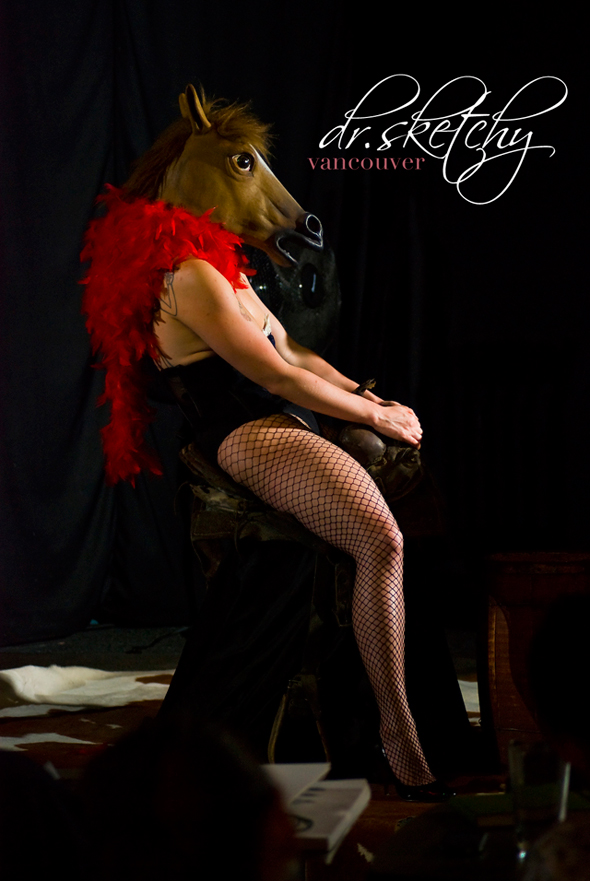 So what kind of people usually attend Dr Sketchy's?

Everyone! Comic book artists, costume designers, visual effects... a lot of animators, and a lot of newbies. I really want to have a show that’s not as intimidating as a regular art class. Even I find a regular art class intimidating to go to, it’s so serious and quiet and... boring! I would like it to be the kind of place where someone who has never drawn before, like those people who say they are no good at drawing, that my class is the class for them. We reward bad drawers! Often I give away prizes for the worst drawing.

What does the future hold for Dr Sketchy's?

I’d like to do more shows. I’d really like to do it in more neighbourhoods. The Main Street show, and also it being on a Sunday, really attracts a Main Street crowd. When I had it in Gastown, it was people who were working in that neighbourhood who would come. The hardest part for me is finding venues that want to do something a little bit risque, and host a show for artists. The Wallflower has been so supportive and really cater to artists. Often they put up artwork that artists from the neighbourhood have done. They have a rotating show every month. Their goal is just to support the arts and they are happy to have us. I’d like to find more places that would like to do something like that. 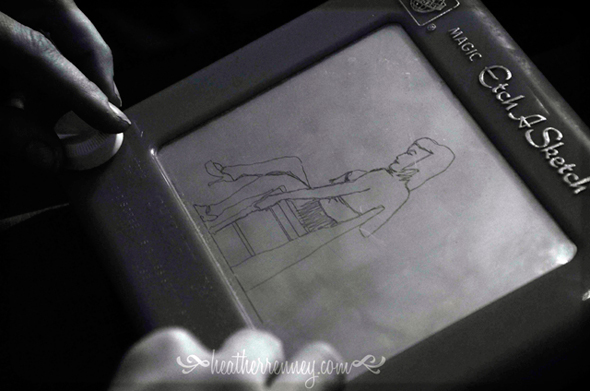 They don't let you sketch like this in art school! (Photo: Heather Renney)

Are you the only person organizing everything?

Pretty much! I have my helper Megz Majewski who is a local artist too. My regular photographer is Heather Renney. They help me set up. And then I have some volunteers, but mostly it’s me!

That’s a lot of work!

It is, it really is. But I’m really excited about it. It’s the best kind of work. I have a good time when I’m there too. I really enjoy putting it all together. It’s a service. I’m honoured to do it.

CARTOON: Another reason why they hate us back east
May 29, 2020 8:59 AM
Comments
We welcome your feedback and encourage you to share your thoughts. We ask that you be respectful of others and their points of view, refrain from personal attacks and stay on topic. To learn about our commenting policies and how we moderate, please read our Community Guidelines.