Hafsa Sadia and a team of volunteers set up a tent at the corner of Main and Gore streets on a late August afternoon and they’re met with every reaction imaginable.

Some passersby are curious, others are hostile. Many couldn’t care less about what Hafsa’s group is doing. Others already know what to expect in the coming minutes. 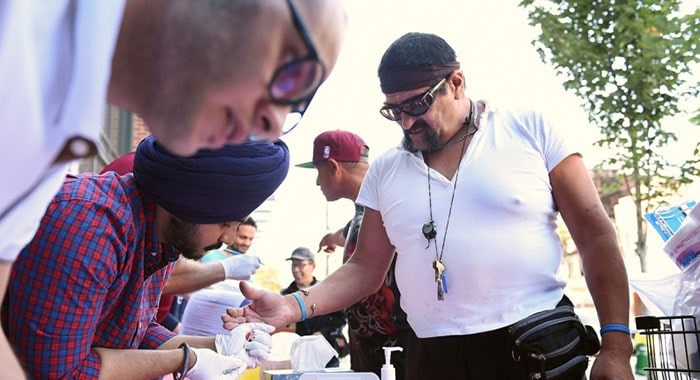 Building trust is the first step for Sadia and others with the Vancouver Virology Centre Society. The group has been staging weekly mobile health clinics in the Downtown Eastside since 2014 and, despite their best intentions, it’s rarely easy going at first.

“Even on a good day we get abused,” Sadia said. “We get our share of people saying things to us, throwing things at us. You have to look at the long-term goal of what you’re trying to do and it starts with building trust.”

Sadia and about 10 volunteers are in the area on Aug. 22 to test residents for HIV and Hepatitis C. Thirty-six people are checked over a three-hour span and most of them agree to testing via step two: incentivizing. Tim Hortons’ gift cards or snacks are given to anyone who agree to the 20-minute process.

One test comes back HIV positive, while 11 others are diagnosed with Hepatitis C.

“Most of the time, they know and they will be able to pinpoint where they got it from,” Sadia said. “With Hepatitis C, the response is usually, ‘This isn’t a big deal, right?’ Well, it puts you at risk of liver failure and cancer. You’ve got to take it seriously.”

Though society members have conducted mobile testing for five years, they’re still in the early stages of reaching their end game. They want full, wrap-around, mobile services consistently travelling through the Downtown Eastside. Sadia envisions that care model including social workers, nurses and other supports all aboard one truck that can service any number of needs.

Tina Madani Kia and Adrian Dela Cruz are in their early 20s and both are studying towards careers in health care. They’re two of about 15 dedicated volunteers who’ve been hitting the streets weekly for two years, and their roles are two-fold: to attract people to the tent and have those people fill out personal health surveys. The surveys cover topics around drug use, personal health and housing.

After surveys are completed, the testing process begins and ends within five minutes. Step three in the group’s gameplan is to have those patients enter into a continuum of care at the society’s office on Burrard Street or elsewhere. It’s that piece of the puzzle that remains elusive.

“We’ve been having trouble with that, having people come back,” Madani Kia said. “It’s really hard to understand why.”

Osamah Alenezi has headed up the society for about a decade, funding it largely himself and through donations from pharmaceutical companies. Statistics gleaned over that 10-year period from 421 participants suggest those who inject drugs are six times more likely to test positive for HIV and 15 times more likely to test positive for Hepatitis C compared to those who don’t inject drugs. After marijuana (55 per cent), heroin (41 per cent) and fentanyl (31 per cent) are the drugs of choice.

The majority of those who agree to testing are men between the ages of 40 and 70.

A pair of men within that age demographic tell the Courier they agree to testing only for the Tim Hortons’ gift cards, not out of concern for their health. Both are certain they’re free of either condition and want to use the gift cards as collateral for either drugs or alcohol.

Dela Cruz and Madani Kia are asked how they maintain hope that the work they’re doing is worthwhile, given those two men seemed largely uninterested with the tests.

“There’s a bit of a sense of futility because these people come and go, getting tested and re-tested,” Madani Kia said. “You wonder if these results even matter to them. There are so many systemic inequalities facing this area — both racial and socioeconomic — but I really believe in what we’re doing and the future of this type of active approach.”