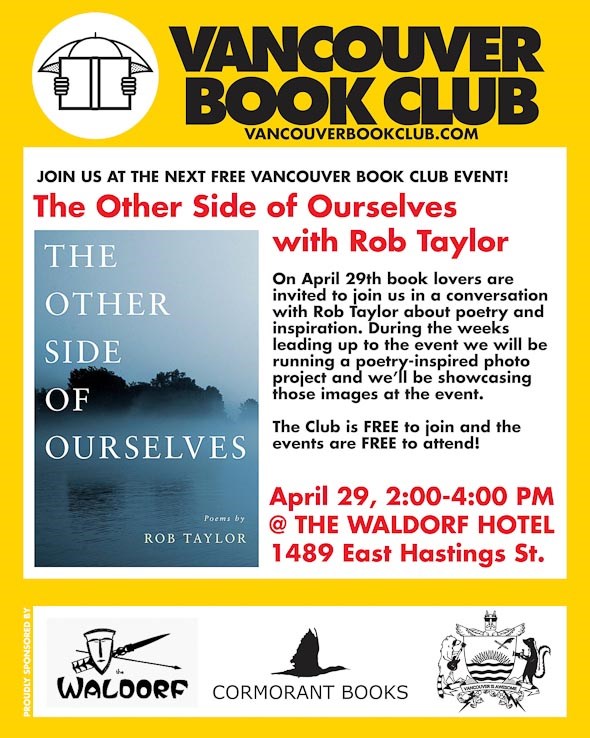 As part of our spring book selection, the Vancouver Book Club is running a poetry-inspired photo contest. Each week we'll post one of Rob Taylor's poems from his book, The Other Side of Ourselves, and we're asking you to create and send us a photo influenced by the poem. Maybe it's just one line that inspires you to create your image, or maybe it's the poem as a whole that gets your creative juices going. The following week we'll post all of the entries we receive, and at our event in April we'll choose the winner.

I wanted to say: look, this intersection, this place

where we have come together and stopped traffic,

is the only place we ever could have met, you and I –

pistons that never before aligned, even when the engine

was at rest, that had to wait until the whole contraption

burst and we were spilled out onto the pavement to see that yes,

all those hints – those darting noises, glints of steam and light –

held truth, that there are others as startled and ragged as ourselves,

and somehow gaining that knowledge seems worth all this blood

and bother and traffic lined up over the crest of the hill.

I wanted to say all of this, but my throat sputtered

which is why I merely waved as we were lifted away

and placed inside the wailing machines

we were only beginning to know to imagine.

1) email the photo to us at books@vancouverisawesome.com. Put "TOSOO Photo Week 1" in the subject line.

The deadline to enter photos for this week's poem is next Wednesday, March 7, 2012, at 6 pm. We'll post the photos the next day.