This new series had its genesis when I began photographing Vancouver area location shoots last summer to get over a long post-Olympics funk.
Susan Gittins Mar 17, 2011 2:18 PM

“Frak yes! It's a BSG reunion” read the New York Post headline of a PopWrap post illustrated with my photos of three of Battlestar Galactica’s cast filming a new NBC TV pilot 17th Precinct on location in Yaletown earlier this week. Why all the excitement? It's the first major project from BSG showrunner Ronald D. Moore which reunites him with main cast – Apollo (Jamie Bamber ), Baltar (James Callis) and Cylon Six (Tricia Helfer) – from the cult sci-fi series plus one of its best directors, Michael Rymer.

As a long time fan of the Vancouver-shot BSG, I joked with friends that 17th Precinct needs Starbuck (Katee Sackhoff ) in the cast to be a true reunion for me, but she will not be in the mix. She has a new project in the offing. BSG’s Chief/Cylon (Aaron Douglas) tweeted her: “Take me with you? Jamie, James and Tricia are ganging up with Ron. I think it is high time you and I gang up somewhere else.” 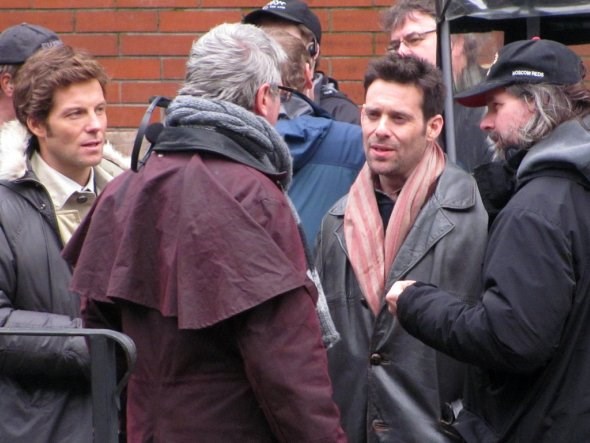 17th Precinct is not the average cops and robbers procedural. Think cops and warlocks instead. It’s a Harry-Potter-for-grownups show about detectives Caolan (Jamie Bamber) and John (James Callis) investigating magical occurrences in the fictional town of Excelsior, with the help of the sorceress Morgana (Tricia Helfer). I spotted the strange steering-wheel-less unmarked car driven by the magical detectives and the Public Necromancer Van at a location shoot in the West End late last week. Police extras loaded a body into the rear of the van.

Most of that shoot happened inside The Kensington, the mustard-yellow Italianate heritage building on Nicola Street, with some exterior scenes scheduled at night until the high winds of last Thursday caused havoc. The craft tent blew off the street, damaging a fridge, and all exterior scenes got pushed to Friday evening. That night shoot introduced other cast members: the venerable Stockard Channing as robbery detective Mira and her partner, the relative newbie Matt Long (Peggy fired his ass on Mad Men), doing a scene at the staged crime scene. Later I spotted Eamonn Walker, who plays Dectective Chief Inspector Wilder Blanks, pile into the cast van after filming wrapped for the week. 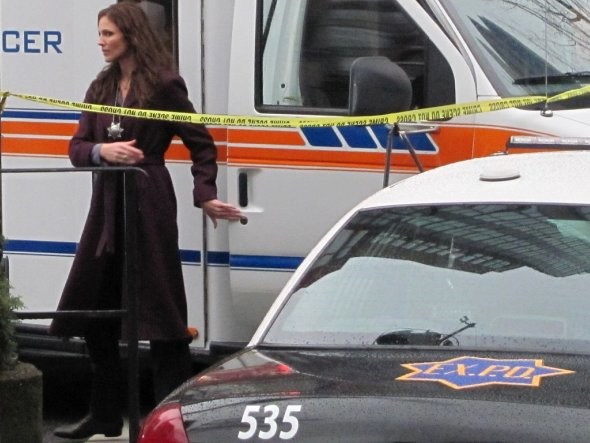 On Monday 17th Precinct crew re-established themselves for a two-day shoot in Yaletown off Hamilton Street. I arrived to see detective partners Jamie Bamber and James Callis filming a scene exiting from their strange police car to investigate a crime scene in the alley. Between takes, the two ex-BSG castmates proved inseparable, giving each other playful shoves and taking breaks at the craft tent together.  No other cast members appeared to be on location that day except for the guest actor who played the corpse but I did get a chance to meet executive producer Ron Moore, who graciously allowed me to take a photo of him. Later I snapped him discussing a scene with his former BSG actors and director Michael Rymer.

James Callis did get a chance to stunt drive his unmarked police car (replaced with one with an actual steering wheel) in the last scene of the day, roaring around the corner onto Drake from Hamilton in several takes. That night 17th Precinct lit a Harry Potteresque lamp with four electrical flames as background for the murder in the alley that would be investigated in the daylight scenes.

On Tuesday, Tricia Helfer joined her former castmates for scenes at the Yaletown crime scene. To the delight of BSG fans worldwide, she tweeted a photo of all three of them relaxing between scenes. I photographed her doing a short scene on Hamilton getting out of the necromancer van with her dark long locks and sorceress costume, a below-the-knee purple coat (nothing like Six's infamously skimpy red-hot dress and platinum blonde hair on BSG). 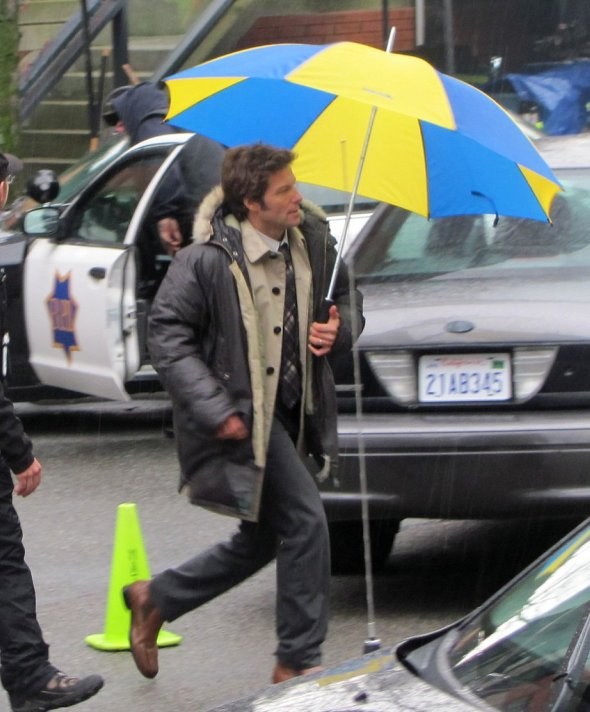 The action moved into the alley in the pouring rain of the afternoon with Jamie Bamber, Tricia Helfter and Eamonn Walker all at the crime scene.. Not much proved visible from the street but fan Sean Koo did get an inside tour in between scenes when camera A (wide-shot) and camera B (closeups) both turned off.  The most curious sight - a crew member drying the wet Vancouver pavement with a blow torch. That rain didn't defeat 17th Precinct but it did me in. I didn't stay for the night shoot, which proved to be more of the actual murder in the alley with special effects.  Tricia Helfer flew home to LA the next day for some sunshine but she will return.

17th Precinct is roughly halfway through its fifteen-day shooting schedule here, with two more location shoots and a couple of days in studio before they wrap. The only major cast member not spotted yet on location is Vancouver's own Kristin Kreuk, a fan-boy favourite for her role as Clark Kent's first love Lana Lang on Smallville. She plays the wife of Jamie Bamber's character. And with Kreuk on board, 17th Precinct is without a doubt the best-looking cast of the pilot season. As @Asta77 declared on Twitter: "How can [NBC] not order to series that much pretty?"