This series had its genesis when I began photographing Vancouver area location shoots last summer to get over a long post-Olympics funk.
Susan Gittins May 5, 2011 10:47 AM

Since I last wrote about Chaos in early February, the dramedy about rogue spies made its debut on CBS/Global on April 1st -- a Friday night at the tail end of the March break -- to a small audience. What were CBS programmers thinking? It seemed inevitable that three episodes later, CBS would put the show on hiatus until the summer. The only surprising thing is that CBS and the studio allowed Chaos to finish filming its season here, wrapping a five-month shoot this past Tuesday.

CBS should take note that Chaos would be a smash hit if Vancouver fans had anything to do with it, judging by all the local tweets and fan photos of the “Right Bastards”, as the four lead actors – Freddy Rodriguez, Eric Close, James Murray and Tim Blake Nelson -- call themselves. One fan arrived at a big shoot in Victory Square in early March wearing an “I Heart Eric Close” t-shirt and charmed Close into posing for a photo with her taken by her boyfriend. Close fans also got signed pages of that day’s script. Tim Blake Nelson signed a fan’s O Brother, Where Art Thou? CD (Blake Nelson did his own singing in the film). And later, the Chaos quartet posed together for yet another fan’s camera. 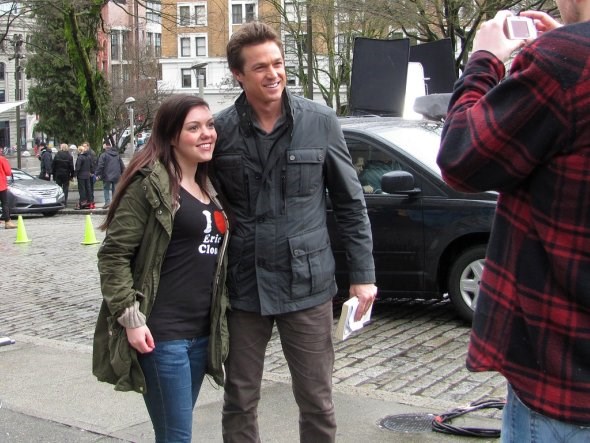 Chaos crew is good at taking parts of Vancouver and making them looking like almost anywhere else in the world, with the marked exception of the desert scenes of the California-filmed pilot. The Victory Square shoot seemed to be set in a fictional Soviet Union offshoot Rukovia and boasted an American embassy at Arch alley, a light armoured vehicle and Russian-type soldier extras with AK-47s on Cambie, as well as dozens of protester extras in the square itself.  Other local areas have passed as Amsterdam, Paris, Turkey, the North Korea/China border and Hong Kong, using creative set dressing and CGI.

Two weeks later in mid-March, I found Freddy Rodriguez on location in "Hong Kong" outside a Chinatown market taking photos of himself outside and then of the four of them together inside with his iPhone in between scenes. He started tweeting these set photos on his Twitter account @FreddyRdriguez as part of CBS's social media campaign for the show. Eric Close opened a Twitter account @EricRClose, as did James Murray under his character’s name @Op_Billy Collins. CBS even brought a Chaos spy-themed mobile social game to hipster, nerd and tri-Mohawk haven SXSW (South by Southwest, the annual music, film and interactive festival held in Austin, Texas), along with Freddy Rodriguez, Tim Blake Nelson and their executive producer Brett Ratner. 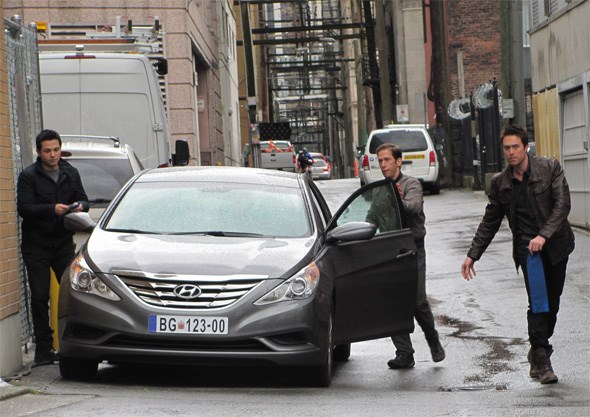 Chaos returned to Victory Square on March 21st to film a chase scene in Arch alley and a murder scene on Cambie, with a strange Turkish cab in the shot. Unfortunately, the City had overpermitted the area that day resulting in early a.m. fights over parking in Gastown between Chaos crew and two TV pilot crews. A week after the premiere, Chaos set up inside the Ginger 62 night club and The Morrissey Pub on Granville Street, filming an early morning explosion inside. They filmed interiors there for three days with only one exterior scene in the sun-drenched parking lot, featuring James Murray and Tim Blake Nelson driving a French Citroen (same car that The Mentalist drives). It was about this time that a friend discovered 2nd unit director Neil Allan (@allalien)’s “Trending on the Set of #Chaos” tweets. When the 2nd unit filmed a stuntman riding a vespa into False Creek under the Burrard Bridge with rescue boats standing by on April 11th, his Trending on Set included #We’reStillShooting?, #LikeSeriously?, #OMGWeShouldHaveBeenDoneHoursAgo and my favourite, #FlyingVespas. I was disappointed to miss seeing a flying vespa by half an hour but also relieved that the stunt had gone off without incident (Chaos had at least two stunt accidents during filming, the more serious one involving a flaming vehicle at a Hastings shoot). 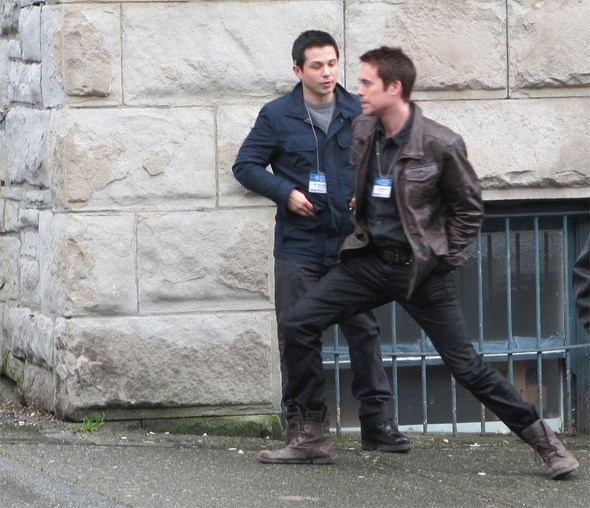 I next heard of Chaos filming at Rio Vista on Southwest Marine Drive while rumours swirled that the show would be cancelled before they could finish filming.  That didn't happen and late last month, Freddy Rodriguez tweeted photos from their season (probably series) finale at an undisclosed location near air hangars, including the four of them “chillin’” in their set chairs. I saw more photos of Freddy Rodriguez, Eric Close, other cast and crew tweeted from the @ginger62pics Photobooth at their wrap party back at Ginger 62 on the weekend. That seemed to be it for me and the Chaos cast, so you can imagine my surprise at finding James Murray, his actress wife Sarah Parish (Doctor Who) and their baby daughter enjoying brunch at Bojangle’s in Yaletown last Sunday. I’d stopped by during the Vancouver marathon to upload some photos and had to ask Murray to move his feet so that I could use the power bar, mumbling an embarrassed "I love your show".

Tuesday marked Neil Allan's last Trending on the Set of #Chaos: #LastDay, #SoLongAndThanksForAllTheFish, #ItsBeenFun. James Murray tweeted what a “superlative” if “exhausting experience” it had been, taking some parting shots at the CBS programmers (off with their Yank heads). On Wednesday, Eric Close tweeted from his home in Los Angeles how much he would miss Vancouver, calling it his “favourite city”. He confirmed what seemed apparent from all the photos and tweets that the Chaos Four had become “life long friends”. In fact, he and Murray and their wives had dinner in LA last night. Hopefully we’ll get to see more of this camaraderie for ourselves when/if the remaining episodes are broadcast this summer.