This series had its genesis when I began photographing Vancouver area location shoots last summer to get over a long post-Olympics funk.
Susan Gittins Sep 19, 2011 8:41 PM

The fourth season of life in the charmingly-eccentric and scientifically-dysfunctional town of Eureka ends with a big emotional cliffhanger tonight on the Syfy network in the U.S. We will have to wait three more weeks in Canada to start seeing the back half of season four on the SPACE channel. And the fifth and final season of Eureka won't air until sometime next year in either country (apart from the animated Christmas episode this December). That's why it feels so strange to write about or show anything of the Eureka series finale, which wrapped filming in Vancouver before the Labour Day weekend. Everything is a potential spoiler.

A month ago, Eureka crew transformed two blocks of Wellington Street in Chilliwack into the Main Street of their fictional town for the very last time: erecting the large Sheriff's Office and Cafe Diem facades, adding the fake bronze statue/fountain of Archimedes and putting their own signage on the Teddy Bear Dreams clothing store (the owner told me Eureka star Salli Richardson-Whitfield bought several items there over the years). Production also set up running tabs at two downtown Chilliwack institutions: the Decade Coffee House and Sticky's Candy, where a young salesgirl showed me the empty vats of ice cream consumed by Eureka crew in a day's filming.

Cast and crew seemed just as verklempt at that last shoot in Chilliwack as the fans who'd come to say goodbye. I saw Salli Richardson-Whitfield hugging the Eureka stunt coordinator and Tembi Locke snapping photos with her camera phone of her TV husband Joe Morton. One of the Eureka producers brought his fancy DSLR to play set photographer, posing Colin Ferguson and Salli Richardson-Whitfield on a bench ahead of their big scene together. Director Matt Hastings couldn't resist photobombing that beautifully-staged shot, which made everyone laugh and then cry. 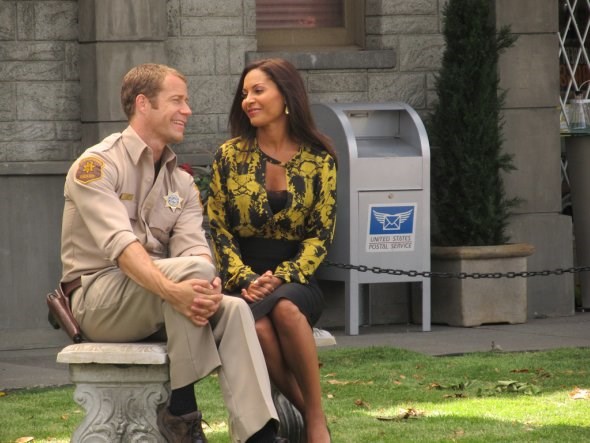 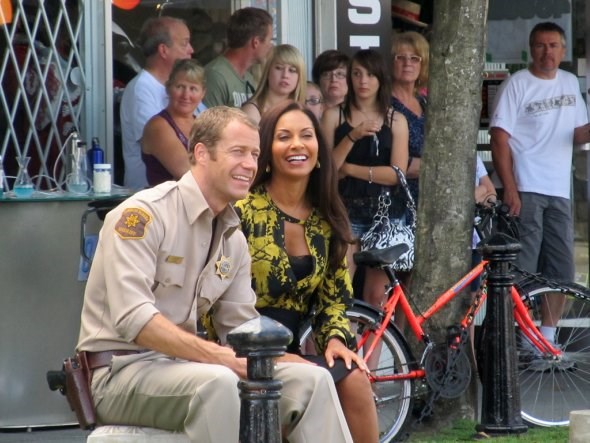 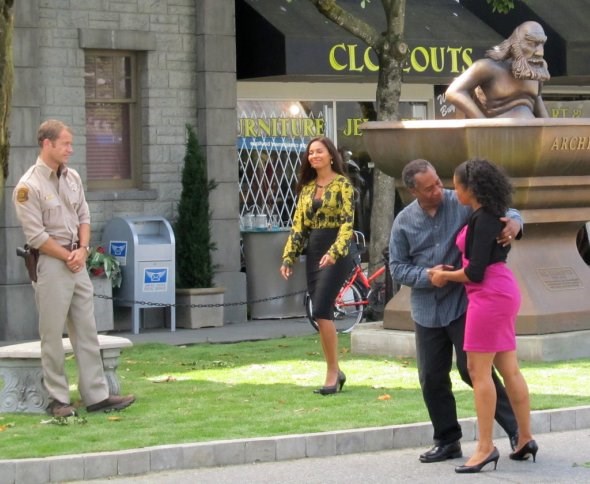 Laughter and tears. Everything about that day in Chilliwack seemed bittersweet. Syfy had renewed and then cancelled Eureka earlier in August, belatedly coughing up enough money to film this last-minute wrap-up episode. Of the nine scenes filmed on August 24th, the first I saw was of Sheriff Jack Carter falling from a wormhole/black hole/some-kind-of-hole-in-the-sky onto the grass outside the Sheriff's Office. A justifiably tired Colin Ferguson, who whines a bit on Twitter about continually hurting himself on set, opted out of this stunt and let a professional do it. Ferguson did manage his own lying-on-his-back-on-the-grass scenes though. Joe Morton did the heavy lifting here, helping Ferguson to his feet in take after take. 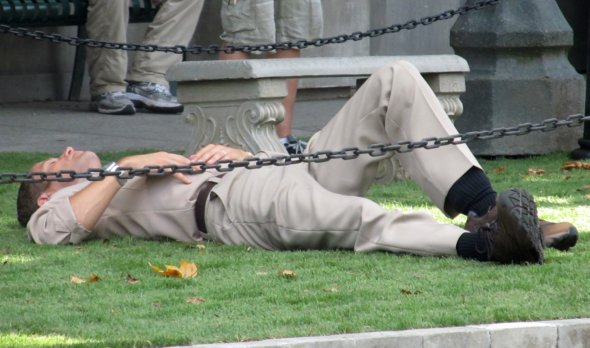 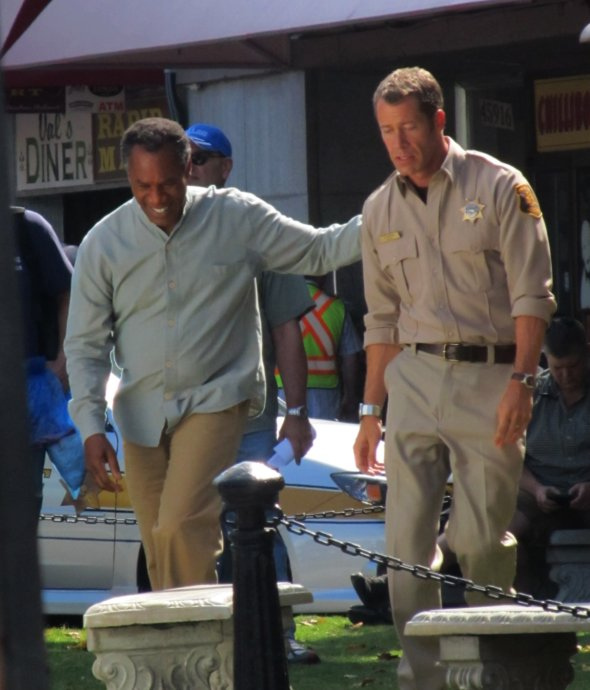 Later the Department of Defence rolled into Eureka, as Colin Ferguson and Joe Morton took their turn filming a scene on that same, busy bench outside the Sheriff's Office. 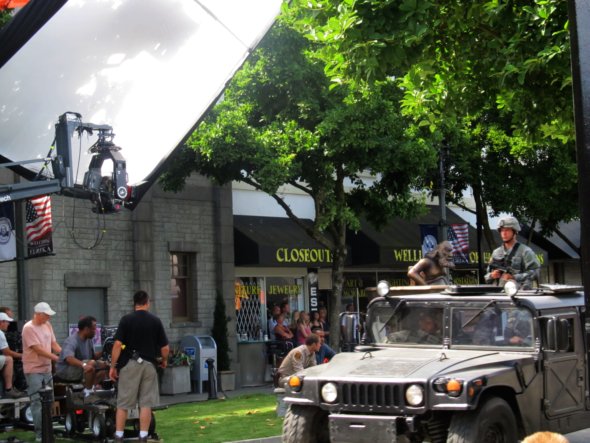 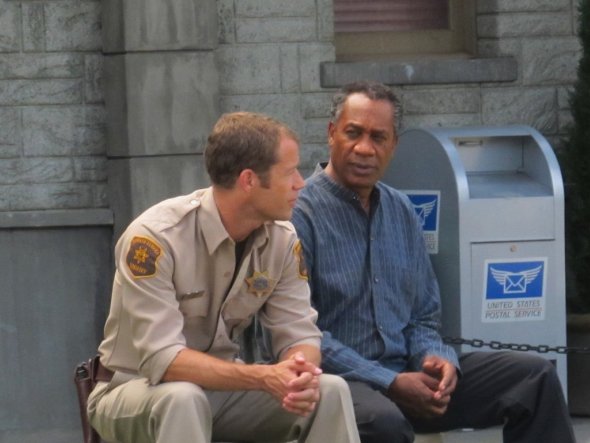 The two pals filmed their final scene together that day at the other main set -- the Cafe Diem -- as soldier extras marched behind them. 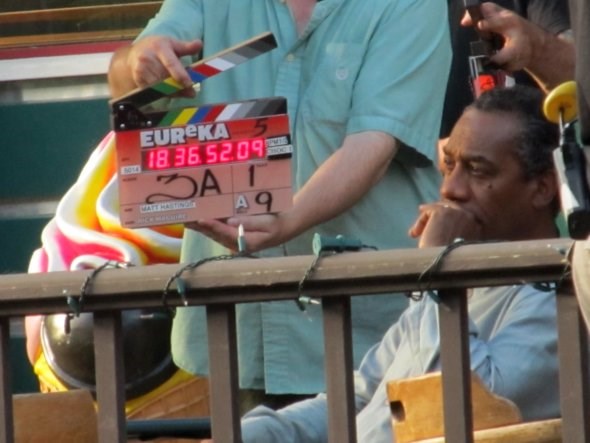 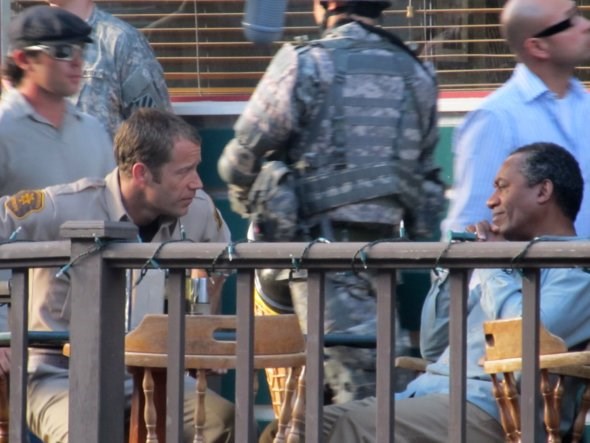 Eureka wrapped in Chilliwack around 8 p.m.,with a tracking shot of the crew waving goodbye to the camera as the fiinal shot of the day. 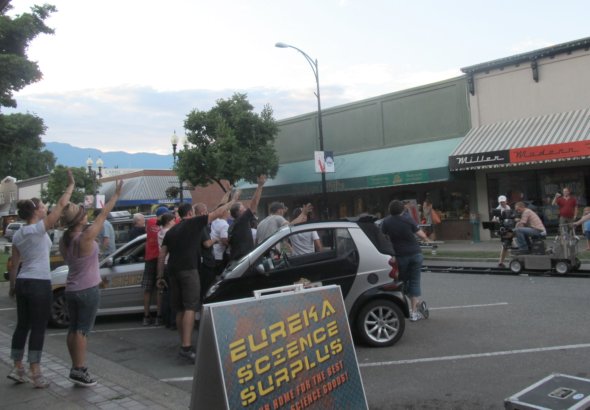 The weekend before, Eureka cast and crew celebrated at their wrap party with other cast like Neil Grayston, Erica Cerra, Niall Matter, Chris Gautier and Sheldon-turned-Fargo nemesis Wil Wheaton who were not scheduled to film in Chilliwack, as well as the Eureka showrunner Jaime Paglia up from Los Angeles. One of the background signs in Chilliwack pays tribute to Paglia. 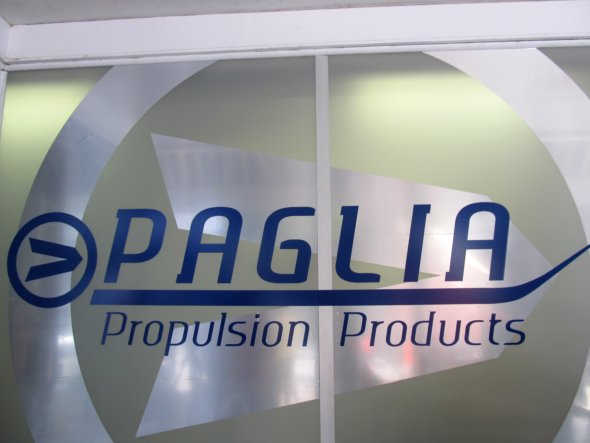 Eureka started filming the series finale that Monday and thus began the sad process of wrapping out cast members and saying goodbye to locations and sets over the next eight days of filming. On Tuesday Colin Ferguson watched them dismantle his favourite set, the in-studio Sheriff's Office,  tweeting "that was really, really sad ....I took my name plate from the desk." Wednesday was spent on location in Chilliwack and Friday somewhere on the North Shore with big helicopter scenes. Ferguson mock-complained on Twitter about having a helicopter shot, a fight scene and 10 pages of dialogue to do that day, concluding that Eureka was trying to kill him. On the weekend, cast and crew rested a bit at another more informal party. The next Monday, Eureka filmed scenes in Sheriff Carter's smart house, S.A.R.A.H. and then started dismantling that set, while bidding farewell to Niall Matter, Tembi Locke and Chris Gauthier. On Tuesday, Eureka filmed final scenes in the in-studio Cafe Diem as cast gathered for a fancy farewell dinner, minus Colin Ferguson who was still busy filming with director Matt Hastings. I later saw a twitpic of the pair trying out different jobs, with Ferguson holding the boom mike while Hastings acted. 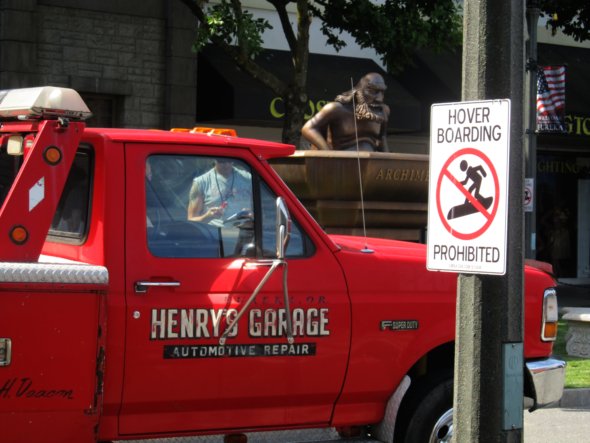 On Wednesday, August 31st, Eureka still had twelve pages of series finale script to shoot on its last day of filming ever. Early on, Erica Cerra tweeted a funny photo of her and Colin Ferguson spazzing out on set,  their heads intertwined and eyes bugged out. But laughter turned to tears as she tweeted: "Officially wrapped. ..*sniffle* *sniffle*." Wil Weaton took a parting shot at Syfy's undoing of Eureka season six tweeting, "Today is what I imagine the last day of University must feel like . . . if you'd been expecting to attend another year and they closed it down." And of course Colin Ferguson wrapped his years on Eureka by aggravating an injury,  "Separated my shoulder a bit more tonight...the AC joint, I'm told? . . .would have preferred an iPad but it's a nice parting gift".

When filming finally ended around 3 a.m. on Thursday morning, showrunner Jaime Paglia summed up the experience:  "Just wrapped the #Eureka series finale. Seven years, 77 episodes. It's been an amazing journey. Thanks to everyone for making it possible." Paglia then hugged the cast, walked the sets and toasted the crew.

Meanwhile, Colin Ferguson and other cast flew to Atlanta hours after wrapping the series to attend Dragon-Con. Besides partying, they were responsible for a daily Eureka panel, where fans peppered them with questions about the show's surprise cancellation making everyone a bit teary. But tears turned to laughter this time as Wil Wheaton brought down the house by miming the final scene of Eureka as someone driving a car, getting out and sashaying away.

Thankfully, it will be a long goodbye before we see what the final scene really is in this endearing, quirky town.