This series had its genesis when I began photographing Vancouver area location shoots last summer to get over a long post-Olympics funk.
0
Jul 15, 2011 3:11 PM By: Susan Gittins

Horror series Supernatural has an amazing international fan base: loyal, opinionated and insatiable for news of their beloved boys, the Winchester Brothers. So when word came that series star Jensen Ackles (Dean Winchester) would be directing season seven's first episode filmed, everyone demanded that locations be found and photos taken. Filming of The CW series began last Wednesday but it took fans a few days to find their show at a Travel Lodge in North Vancouver last Friday night.

It was almost dusk by the time I arrived to catch a relaxed and happy director, Jensen Ackles, taking a break between motel room scenes to joke with one of the producers, various crew and his bodyguard/driver Clif out in the parking lot. He later looked down at his smart phone, chuckled and shared something funny: maybe some tweets from his series co-star Jared Padalecki (Sam Winchester), who joined Twitter during the hiatus and has proved to be a crazy-fun tweeter, posting a photo of himself eating a steak and teasing veteran Supernatural tweeters Misha Collins (@MishaCollins) and Jim Beaver (@JumbleJim) with tweets. There's only one problem: Padalecki can't get verified despite an instant base of 100,000+ followers. 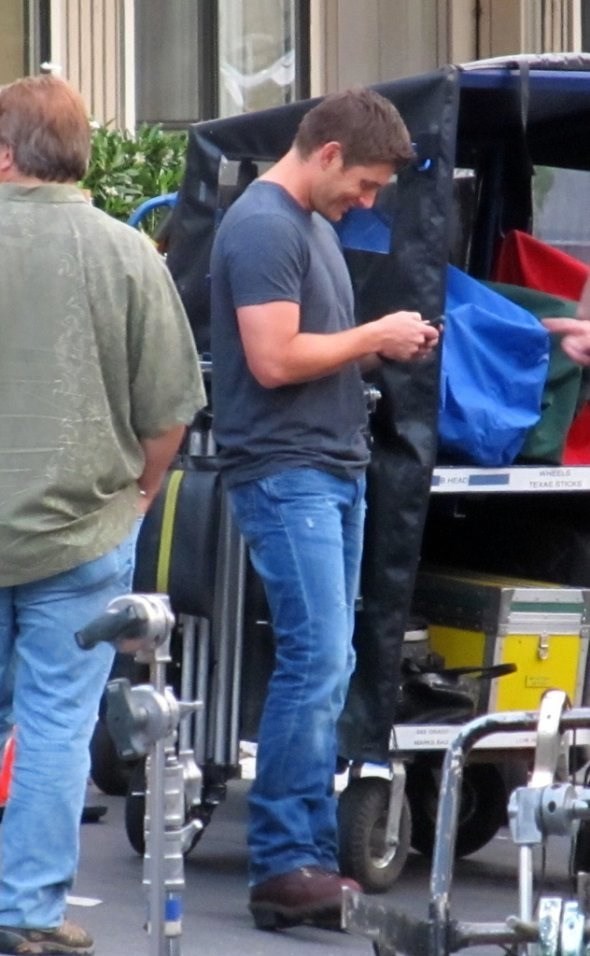 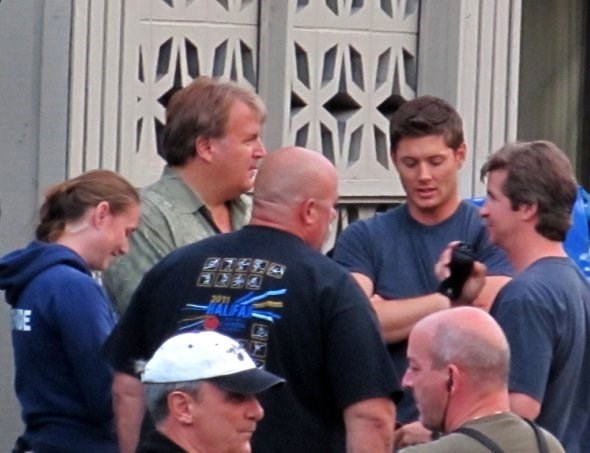 Jensen Ackles clearly enjoys directing after trying it out last season -- flying in a week or so early to prep for directing episode four of season six.  This time he's directing a Sam-centric episode three of season seven. If you don't want to spoiled about it, even a little, stop reading now.

Reportedly, The Girl Next Door is a flashback to Sam Winchester at age fifteen when a girl named Amy saves him and tries to get him to run away with her. The grownup Sam meets Amy again in present day when she's seemingly settled into a normal life but it wouldn't be Supernatural if Amy didn't harbour a terrible secret of some kind.

Earlier this month, sci-fi fandom went a little nuts over the rumoured casting of "Sci-fi goddess" Jewel Staite of Firefly and Stargate Atlantis as grownup Amy. I confirmed it last Friday when I photographed Staite on set at the Travel Lodge (see below). Colin Ford, who regularly plays a young Sam, and Matt Frewer of Max Headroom/Intelligence/Alice fame are also in the episode. I might have seen them leaving set that night but it was too dark to be sure and I can't figure out why they'd be in the motel room scenes with Staite. It's possible Jared Padalecki was there too at some point but I didn't see him before I left at 11 p.m. 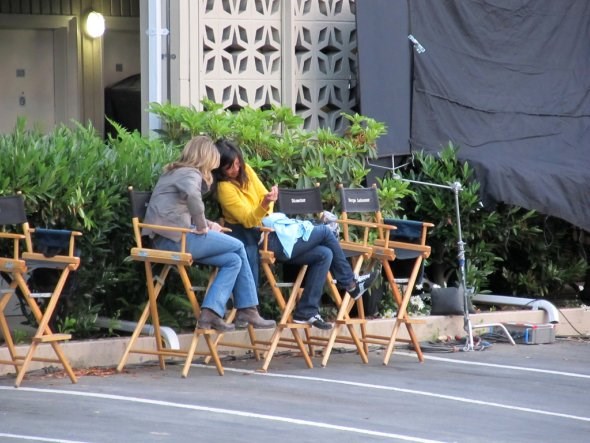 After an almost-three-month hiatus, Jensen Ackles flew back into Vancouver on June 26th to give himself time for directing prep. Jared Padalecki didn't return until the night before scheduled filming was set to start on July 6th, and had trouble getting back into the country, tweeting "Good news, just landed in Canada for Season 7. Bad news - apparently they don't like me in their country ... so much for a warm welcome back . . ." Jim Beaver returned around the same time, tweeting a photo of himself with cropped hair, a new look for his character Bobby Singer after six seasons of looking the same.

Fans had trouble finding Supernatural on location last week because production signs had been changed to DL from KMAN but on Friday two fans tweeted from Denny's in North Vancouver that Supernatural filming next door. I saw no sign of fans when I got to the Travel Lodge on Marine Drive but several motel guests had settled in to watch the goings-on until the shoot wrapped at 1 a.m. (not the usual Supernatural "Fraturday" when Friday filming extends well into Saturday morning). 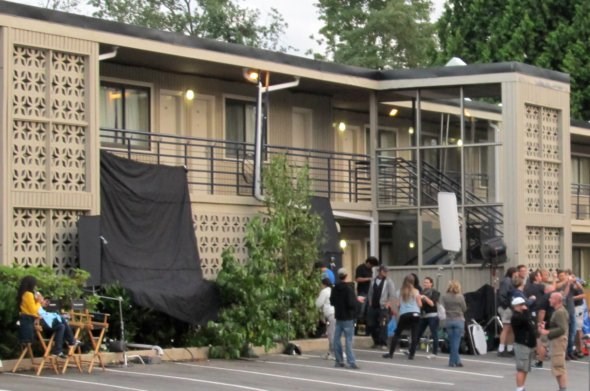 Supernatural relocated to the West Vancouver end of Marine Drive this past Tuesday, turning the Cypress Park Mohawk station into Whitehouse Mt Gas and Sip, with a large carved bear in the entrance and the show's signature Black Impala parked in front. I would never have expected Supernatural to show up at this location: West Van's lower road doesn't have enough room for cars, buses and cyclists far less film trucks. Top agency photographer Richard Fedyck, aka @PUNKD_Images, managed to find a place to park and photographed Jensen Ackles, script in hand and wearing a black t-shirt with his jeans and boots, talking to one of the actors ahead of a scene. After Jared Padalecki arrived, Ackles directed himself and his co-star in the last scene of the day.

Supernatural returned to the North Vancouver side of the North Shore this Thursday and Friday to film in Lynn Valley. I found crew setting up for a night shoot in Princess Park in the rain yesterday and heard they filmed daytime scenes at a library nearby but didn't have time to find the location. By the time I returned to the park after dark around 9 pm, the Black Impala was in the parking lot, the woods lit up with film lights and smoke from the show's ever-present smoke machines drifted through the trees and over a grass meadow into the scene.  I photographed them filming inside the Impala but didn't linger with the park set to close to the public at 10 p.m. , and so I missed the scene of Jewel Staite as Amy arriving in an SVU. As the night wore on Supernatural moved further into the park, wrapping around 3 a.m. They will return to tonight and are scheduled to go to 2:30 a.m. -- approaching Fraturday hours. 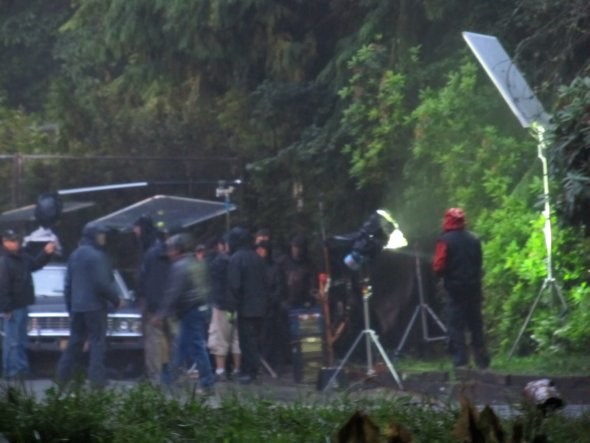 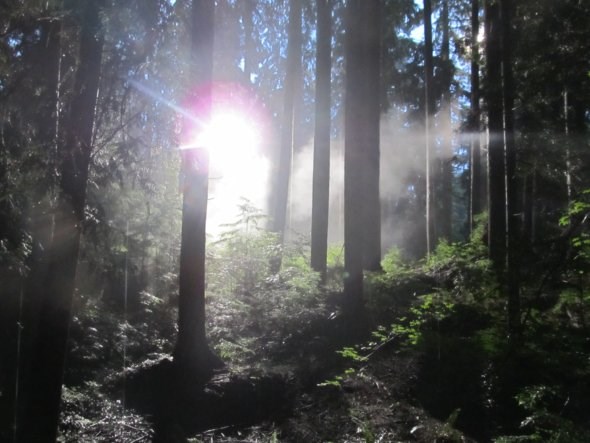 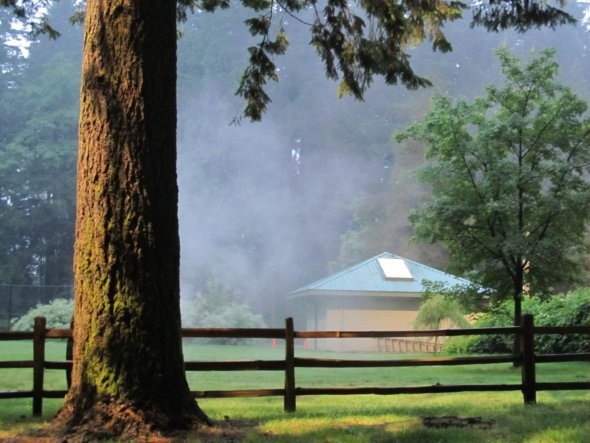 And that will be a wrap for the Jensen Ackles-directed S07x03 (season seven episode three) which is not expected to air until mid-October. Fans at San Diego Comic-Con on Sunday, July 24th, should get a sneak peek of some of the Ackles-directed footage at the Supernatural panel, held for the first time ever in Hall H. Of course series stars Ackles and Jared Padalecki will be on hand too for one of the Top 50 most popular panels at the annual geek fest (The Walking Dead panel ranks #1).

Next week Supernatural will begin filming its season opener where we will start to learn the fate of the show's new God -- Castiel -- played by fan favourite Misha Collins.

Update: Jensen Ackles got good reviews from his actors: @JewelStaite tweeted "Wrapped, headed to TO! Jensen Ackles simply rocks as a director. And I'm not saying that simply cuz he's hot (What am I saying?? Need sleep)" and @JarPad tweeted "What. A. Week. Ackles directed (and kicked ass)."