#YVRShoots - Once Upon A Time in Steveston Village

This series had its genesis when I began photographing Vancouver area location shoots last summer to get over a long post-Olympics funk.
Susan Gittins Aug 5, 2011 12:31 PM

New American TV series Once Upon a Time is about two worlds: one set in fairy tales and another set in a New England town, with the more-than-100-years-old Steveston village standing in for Storybrooke, Maine. On Monday night last week, crew transformed Moncton Street in Steveston for filming the next day: boarding up and plastering  newspapers on the windows of Nikka Fishing & Marine to make it look like a derelict Storybrooke Free Public Library; putting their own weathered signage like Storybrooke Hardware and Paint over Steveston Marine & Hardware on the side of a building; and erecting several other dirtied-up signs like Purbeck Shoe Store on the Steveston Drugs brick heritage building. This was all done to film scenes of  Once Upon a Time lead Jennifer Morrsion (Cameron of House) walking on the boardwalks and crossing back and forth across Moncton Street for the second episode of the series.

The magical story of Once Upon a Time apparently begins in the pilot with the grand wedding of Prince Charming, played by Josh Dallas (Thor), and Snow White, played by Ginnifer Goodwin (Big Love), in a distant fairy tale world  -- filmed this spring in Vancouver with greenscreens and 200-plus fairy tale costumed extras. Meantime, in the world of present-day reality their daughter Emma Swan, played by Jennifer Morrison, has grown up without knowing her fairy tale parents, which goes a long way to explaining her profession as a kick-ass bail bonds collector in Boston. Things change when Henry, the son Emma gave up for adoption a decade earlier, finds her and begs her to come back with him to Storybrooke where he says fairy tale characters have been cursed to spend their lives in the real world without getting happy endings or even knowing their true identities. She drives there with Henry, played by Jared Gilmore (Bobby on Mad Men), in her yellow VW bug, where she meets some strangely familiar people and decides to stay awhile. 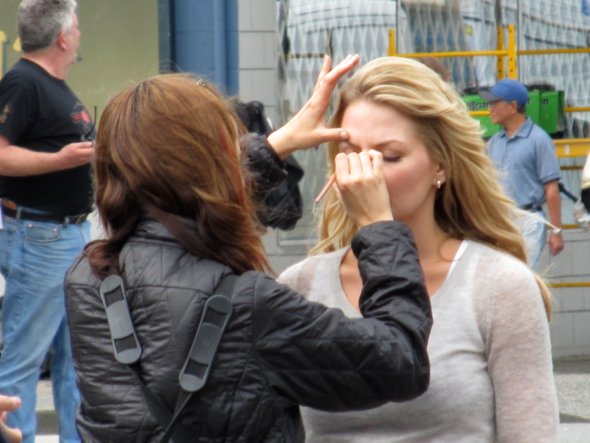 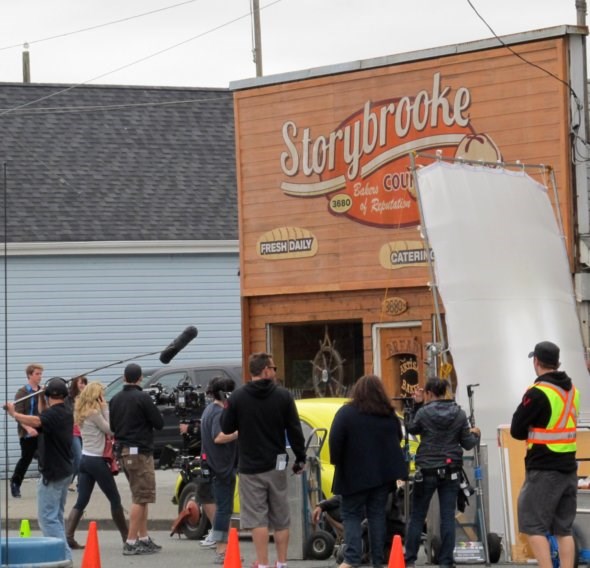 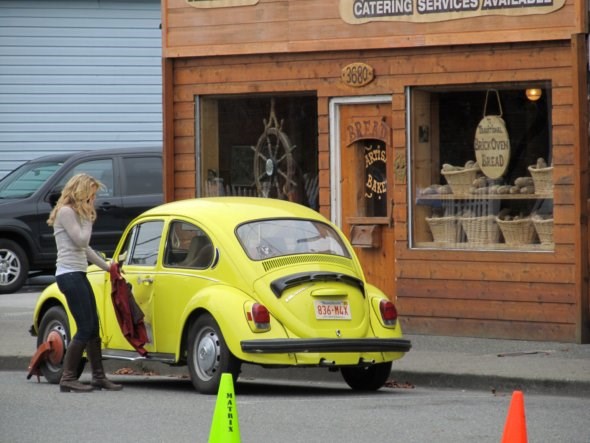 No one outside of production caught a glimpse of Once Upon a Time filming the fairy tale world scenes of the pilot, but a small crowd of people did watch Jennifer Morrison do a yellow-VW-bug-driving-scene on Seymour Street downtown in late March and then in early April, a smaller crowd watched her yellow-VW-bug arrival in Steveston as Storybrooke.

Created by Lost writers Eddy Kitsis and Adam Horowitz, Once Upon a Time should know how to mix reality and fantasy and cross between the two. The pilot cuts back and forth between the present world of Storybrooke and the past world of the Enchanted Forest and there's even a few subtle nods to Losties, like the clock tower above the library in Storybrooke has stopped at exactly 8:15 in the pilot. 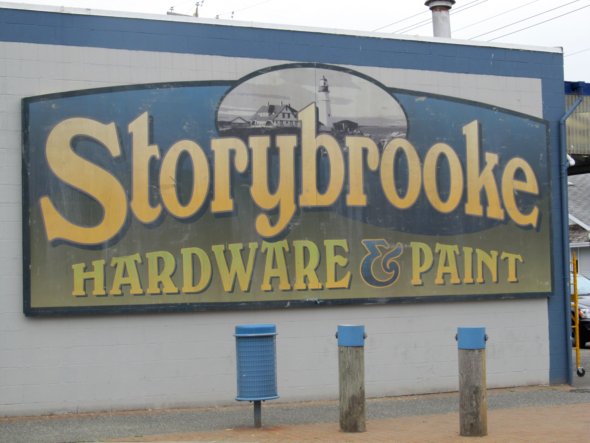 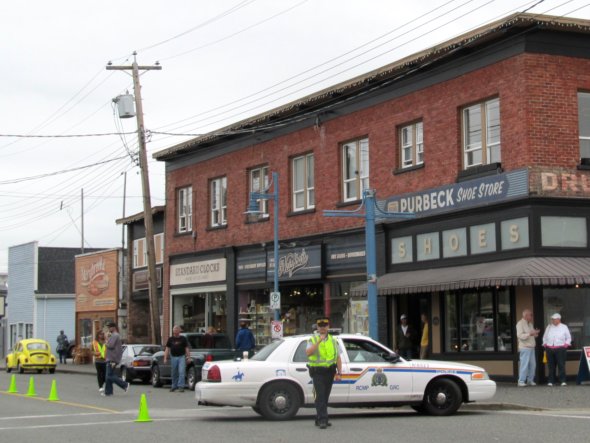 Once Upon a Time's cast seems positively giddy about their good fortune, sharing much of their adventure in regular tweets. For example, in early July when Ginnifer Goodwin packed up her belongings in a U-Haul to drive up here, she tweeted: "In answer to the queries, the Fun Army & I en route to our new lives in Vancouver where we'll film Once Upon a Time!" A few wrong turns put her a day behind and so she missed the big gala dinner in L.A. for William & Kate. Instead she spent that day in her new home watching "smart boys" set up Wii  and looking out at the "GORG" view of the mountains.

Greg Beeman, an executive producer of sci-fi smash Falling Skies, also arrived early in Vancouver  to prep for directing Once Upon a Time's second episode. Filming started on Tuesday, July 19th, with a return to Kerrisdale School (featured in the pilot), with Ginnifer Goodwin in her real world role as Henry's teacher. Jennifer Morrison appeared in some scenes at that two-day shoot, as did Robert Carlyle of Stargate Universe fame. Carlyle plays Mr. Gold ( the man who effectively owns Storybrooke) in the real world and Rumplestiltskin in the enchanted one.

That weekend, the Once Upon a Time cast headed down to San Diego Comic-Con, where eTalk's Lainey Lui interviewed Jennifer Morrison and her TV fairy tale parents, Ginnifer Goodwin and Josh Dallas, about the new show. Morrison talked about using the beauty of Canada to serve the fairy tale world, especially our forests. And all three raved about their Vancouver crew. Post-media gauntlet, the Once Upon a Time cast were overwhelmed by fans at a packed screening of the pilot, followed by a panel moderated by Lost co-creator himself Damon Lindelof.

And then the Fun Army headed back to Vancouver where Once Upon a Time crew had been busy transforming Steveston's Moncton Street into Storybrooke, parking a Storybrooke Sheriff's car by the now derelict library and several older cars along the street. Everything  had to be a bit ramshackle, even the bikes, to depict a place frozen in time. I photographed most of it but missed one wonderful piece of set decoration spotted by fan Sean Koo: a Storybrooke Daily Mirror news box with a front page mug shot of Jennifer Morrison as Emma and the headline: "Stranger Destroys Historic Sign. Alcohol Involved."

Once Upon a Time's day in Steveston last week started around 8 a.m. so I missed early scenes. I arrived before noon to see extras loitering on the boardwalks outside the fake storefronts, waiting for star Jennifer Morrison to do her tough chick scene of Emma walking angrily from the newly-lush garden patio of the Copper Cafe turned Granny's Diner to her yellow VW bug parked outside Storybrooke Country Bread, to toss her signature red leather jacket into the car. During rehearsals, the assistant director asked crew to find something to park in front of two local black SUVs which looked too modern for frozen-in-time Storybrooke.

Why is Jennifer Morrison's Emma so angry? Well how would you feel finding out you're the "chosen one", fated to save everyone from a curse wrought by the Evil Queen, played by Lana Parrilla.  A couple of hours after watching Morrison stomp across Moncton Street, I spied Parrilla  in her real world role as the Mayor of Storybrooke and Henry's adoptive mother, wearing a dress, white raincoat and black heels (see below) outside the derelict public library. She didn't look too scary in person, but I haven't seen her in costume as the Evil Queen yet. 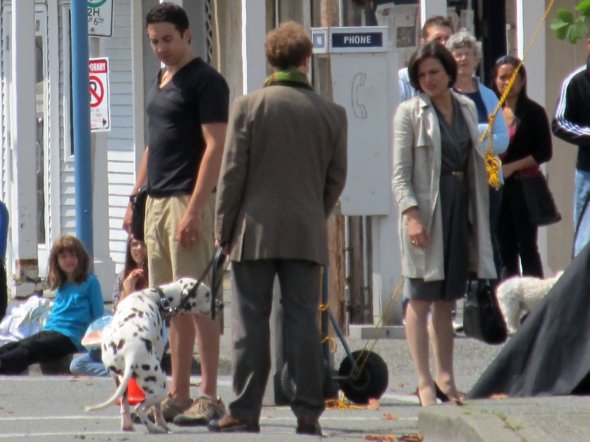 Around 4 p.m., Jared Gilmore arrived on set to do two or three hours of walking scenes with Jennifer Morrison, who had retrieved her red leather jacket  from the car. Mother and given-up-for-adoption son started near Storybrooke Country Bread and later moved east to the actual Steveston Coffee Co (as itself), walking back and forth across Moncton Street and along the boardwalks with camera crews. 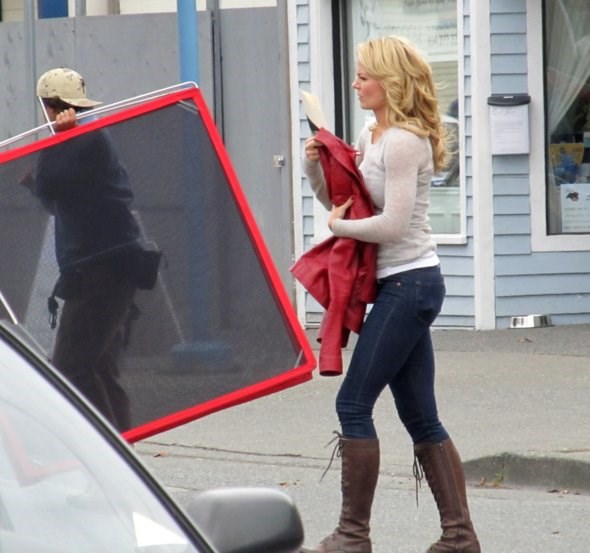 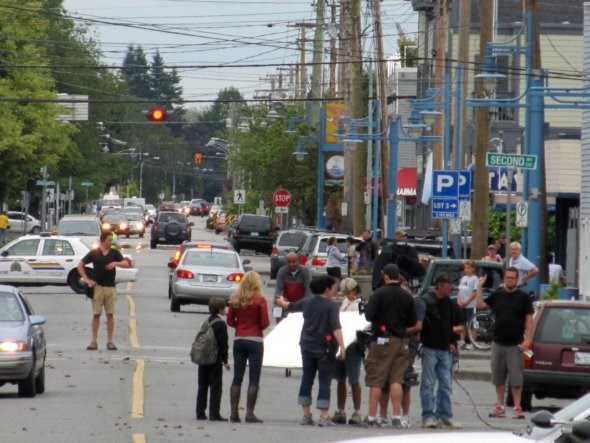 At dusk, crew hoisted a big film light above Steveston to shine down on the fake Storybrooke storefronts. Twenty minutes later, a watertruck sprayed the street to sharpen the colours and shapes at night. Jared Gilmore, meanwhile, acted his age, running around with a nerf gun shooting people and even taking a turn in the camera operator's chair for what would be a tracking shot of him and Jennifer Morrison walking out of the fake Modern Fashions storefront and down the boardwalk. The actual filming of the scene took only ten to fifteen minutes after hours of set-up. Hearing the words "OK that's a wrap guys" a backpack-wearing extra outside Storybrooke Country Bread shouted "Oh Hell Yeah" and a nearby production assistant punched her arm in the air. While Steveston is a lovely place to hang out, it had been a long 13-hour-plus day when the lights went out at 9:40 p.m. 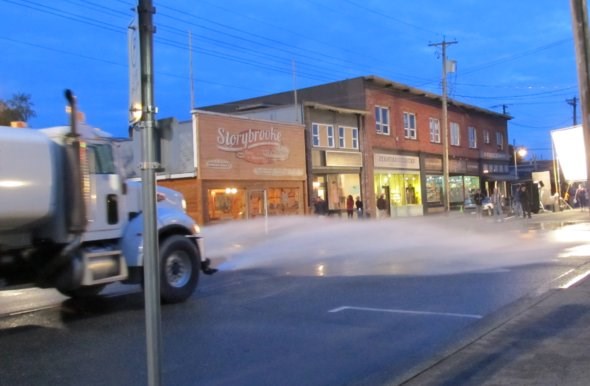 Josh Dallas flew into Vancouver a few days after the Steveston shoot for the July 29th start of episode three of the series, tweeting: "First day back on #OnceUponaTime and #OnceUponaTimeTeam". Jennifer Morrison retweeted, adding "Yah! We missed u."  The main cast spent the Saturday of the August long weekend doing a poster shoot and this week found themselves back on location for some enchanted forest scenes. Dallas tweeted a photo of lush green mountain peaks from his trailer.

Once Upon a Time did film behind Capilano College yesterday so perhaps North Vancouver forests are to be the Enchanted Forest of the series, but one thing this area doesn't lack is lots and lots of trees. I would be thrilled to photograph the cast and extras in their fairy tale garb whichever forests they choose to film in wherever they are. Of course, one place we know we can find Once Upon a Time is Steveston, maybe as soon as next week. This charming village is going to be a recurring backdrop throughout the series.