#YVRShoots - Where is Peter Bishop?

This series had its genesis when I began photographing Vancouver area location shoots last summer to get over a long post-Olympics funk.
Susan Gittins Aug 30, 2011 1:13 PM

Friday night delayed-viewing hit Fringe did something unprecedented with its third season finale: it made Peter Bishop, one of its trio of main characters, cease to exist and asked Joshua Jackson, the actor who plays him, not to appear in the show for an unspecified amount of time in the fourth season filming  now.

It appears much has changed since Peter Bishop averted the apocalyptic future of season three and created a bridge where Fringe's two warring parallel universes could cross over and interact. Early episodes of season four are said to focus on what the lives of his beloved Olivia Dunham (Anna Torv) and "father" Walter Bishop (John Noble) , as well as their alternate universe dopplegangers Fauxlivia (also Torv) and Walternate (also Noble), would be like without him. Lives that are not necessarily worse in the two universes, just different, except for Walter, who is a very sad man without Peter, as you can see in the photo below of Torv and Noble filming a scene of the two of them sitting on the back of an ambulance.

FOX began promoting the upcoming Fringe season with a sublimal teaser which spelled out "Where is Peter Bishop?" backwards and there have been several more teasers since, as well as promos for the aptly-named premiere, Neither Here Nor There, the latest of which appeared last night during a FOX commercial break. And of course the Twitter-savvy Fringe has its own hashtag #WhereisPeterBishop? 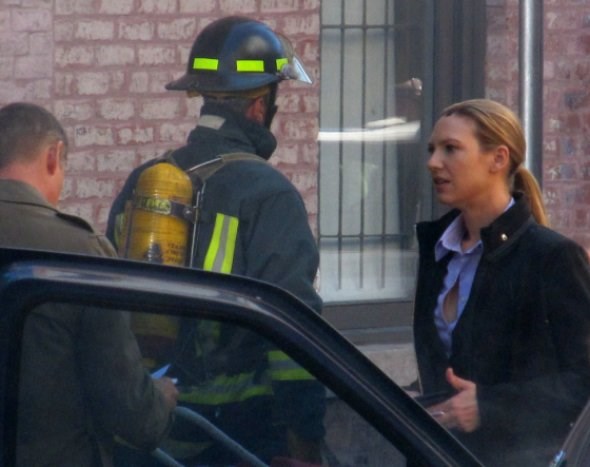 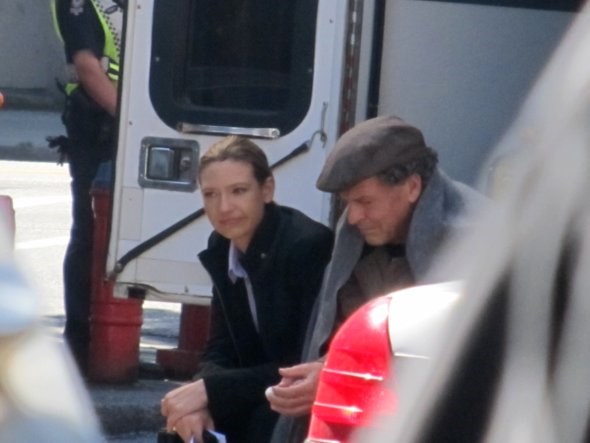 Filming of the season four opener began in mid-July and included a stint inside the old Terminal City Ironworks compound in east Vancouver where the two universes overlapped in last season's twisty finale. Props crew were inside for several days but what they built and what Fringe was filming remains a secret as does almost everything about the premiere, except that it's big (Observers spootted on set along with Hartford police car). I had speculated Joshua Jackson snuck into town for this on July 21st until I read a report that he'd been briefly hospitalized in Santa Monica that same Thursday for an allergic reaction.

Fringe, needing someone to fill the gap left by Peter Bishop, did upgrade Seth Gabel to series regular. Gabel, who plays Fringe Division agent Lincoln Lee in the alternate universe, reportedly will spend more time as original universe Lincoln Lee and his thick  black glasses this season. I found glasses-wearing Lincoln Lee running up and down the street and entering a Burnaby Heights house in take after take on Friday, July 22nd. The next day Gabel flew down to the annual San Diego geek fest Comic-Con to join the rest of the Fringe cast signing autographs Saturday afternoon at FOX Fanfare -- all of the cast except Joshua Jackson.

At the Fringe panel, cast and producers made light of their missing main character, showing the audience a spoof video of recasting sessions for Peter Bishop. Those featured in the secret auditions included Jeff Probst, Zachary Quinto, Greg Grunberg, Michael Emerson, Jorge Garcia and  Lost co-creator Damon Lindeloff, who'd tweeted back in May: "Yes. I DID love the Fringe finale.And if my theory about NEXT season is right?  Josh Jackson better start shaving his eyebrows." In a nod to Lindelof's theory, Joshua Jackson appeared in the video in costume as an Observer, right before he came out on stage at Comic-Con dressed as one in a grey suit and fedora. Vancouver's own Nadine Ramsden, aka @naddycat on Twitter, summed up the audience reaction, tweeting: "JOSH JACKSON JUST WALKED IN. IN AN OBSERVERS OUTFIT. WTF. #Fringe". But the surprise Comic-Con appearance did not signal Jackson's return to Vancouver.

Apparently, one of the features of this Peter Bishop-less new reality on Fringe is combined case work by Fringe divisions in the two universes. In early August, I got to watch an example of this at a house in Massey Heights in New Westminster, arriving to see Anna Torv and her photo double as Olivia and alt-universe Fauxlivia and Seth Gabel as alt-universe Lincoln Lee. It was confusing to watch because Anna Torv and her photo double looked identical from behind dressed in their blue suits and long blonde hair. Where were the red wig and Fringe Division fatigues for Fauxlivia?  It took two days for crew to shoot this because of the multiple versions in each scene. Anna Torv had to play Olivia and then Fauxlivia, as did her double, and some scenes had to be done on greenscreen too. 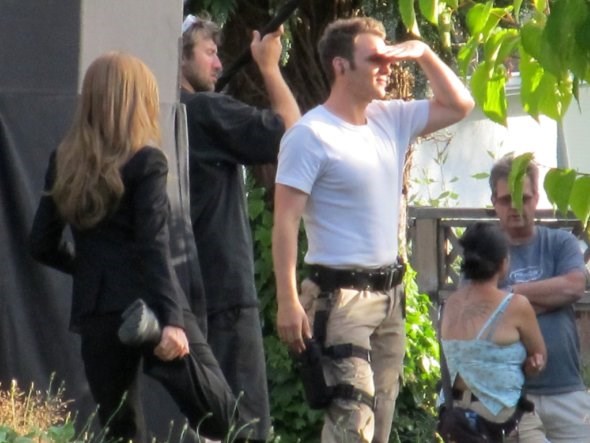 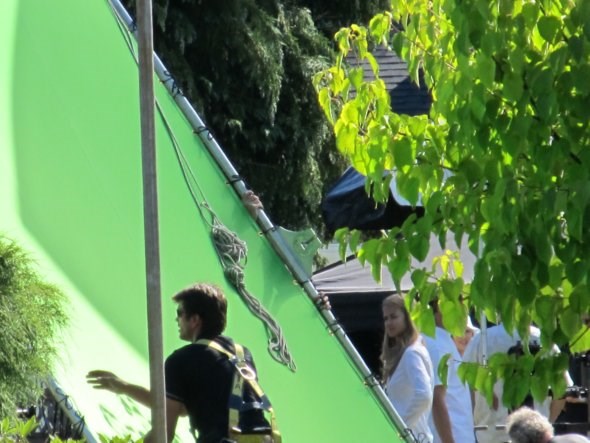 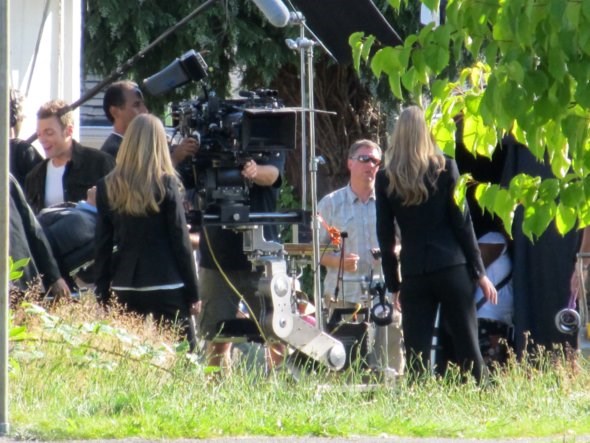 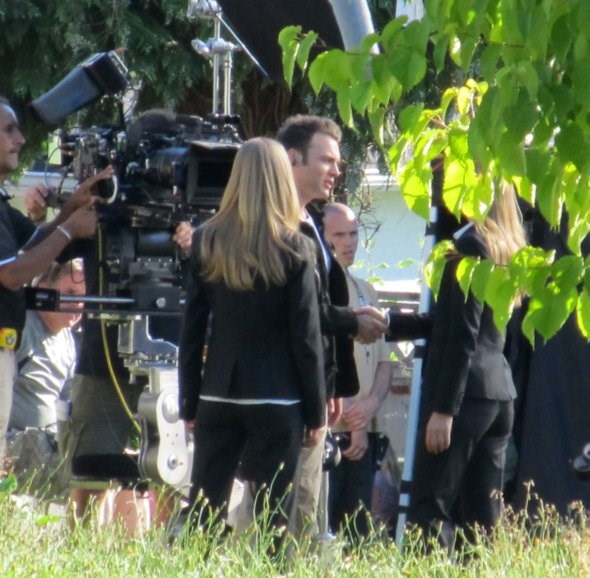 Meanwhile, FOX's Where is Peter Bishop? promotion continued at the Television Critics Fall Sessions in Los Angeles, with critics getting a chance to pose as the new Peter Bishop in a stock photo between Olivia and Walter, while the real Joshua Jackson joined them at the FOX All-Star Party with his girlfriend Diane Kruger. FOX entertainment chief Kevin Reilly told critics that moving Fringe to Fridays ranked as one of the network's "great victories" last season thanks to the show's loyal fans (an average of 4.4 million watched the show live last season but that jumped 41% to 6.2 million when delayed viewing included, making Fringe a Friday night hit).

Still, all the rumours that  Joshua Jackson would not be filming until well into September seemed to be true. Vancouver's Once Upon a Cure for Hunters Syndrome charity had tried to contact Jackson this summer to persuade him to join a legion of local sci-fi show actors, ranging from Sanctuary's Amanda Tapping to Eureka's Colin Ferguson, to participate in an auction ahead of the September 24th gala, and were told Jackson would not be in the city until next month.

I tweeted the bad news to an Australian Fringe fan Lyn who'd seen him as the Observer at Comic-Con and then travelled to Vancouver in hopes of meeting him. She'd managed to make her way out to the New Westminster shoot but the consolation of seeing Anna Torv didn't stop her crying "buckets" at the news. Someone reading her tweets took pity, sending her a copy of a Fringe filming notice for an apartment building shoot in the West End last Monday and Tuesday. And then someone else tweeted a photo on #yvrshoots of another Fringe filming notice for a Chinatown cafe shoot last Wednesday and Thursday.

Pent-up demand to see Fringe filming suggested crew would be overwhelmed with fans for the four-day shoot downtown. But when the Australian fan Lyn showed up first thing last Monday at The Sherburn on Jervis Street, the only people she met in the pouring rain were other international fans. They bonded, forming what they later dubbed the International Fringe Brigade, but didn't see much filming since the morning exterior scenes had to be scrapped. Around suppertime after the rain eased, some of  the Brigade returned to see a scene of  Olivia and Walter driving up in an SUV, Walter sitting on a bench and Olivia going inside. And then after it wrapped, the Australian fan Lyn got to meet and pose for a photo with her fellow Aussie Anna Torv.

The Brigade returned to The Sherburn early last Tuesday to watch some exterior scenes with Walter and then the Australian fan Lyn met another fellow Aussie, John Noble.  Now a fixture opposite the shoot, crew tipped the Brigade that Joshua Jackson was expected later that day. It didn't seem credible but it happened. As @Canadagraphs wrote in his blog Canadagraphs dot Weebly dot com, Joshua Jackson arrived, hugged and shook hands with crew and later met up with the dozen or so fans and posed for photos with them (including our overjoyed Australian fan Lyn). After filming inside for half an hour, Jackson walked out with John Noble, where they ran into @NaddyCat and her Twitter-famous bulldog Bella. Jackson and Noble both crouched down to pet Bella -- who kept licking Noble -- while @NaddyCat pitched Jackson on participating in Once Upon a Cure. I arrived too late to witness any of this but heard the stories from the Brigade (on the far right of the photo below) and saw the pictures in Canadagraphs' camera. 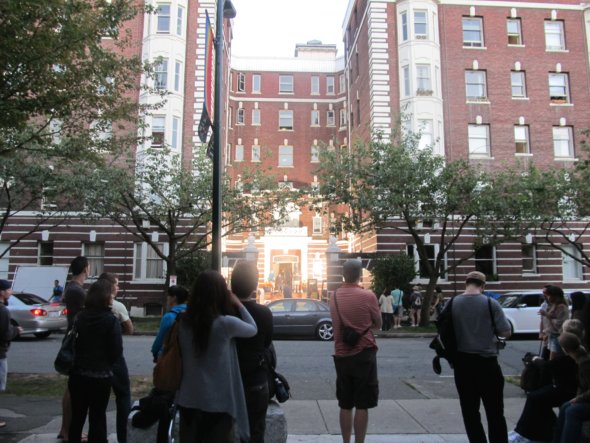 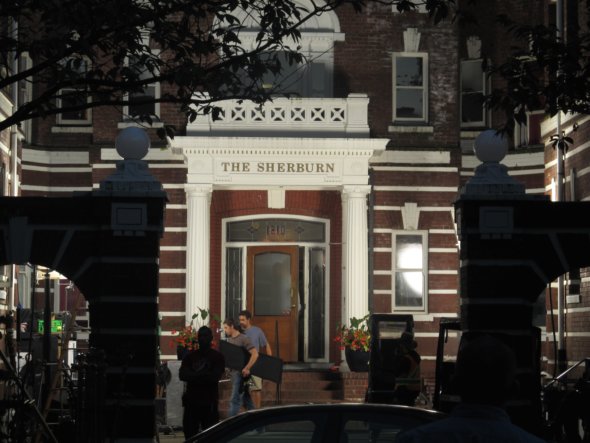 Fringe moved from The Sherburn to a shoot outside the Scotiabank Theatres last Wednesday morning with a fake subway entrance placed on the pavement ahead of the big night shoot at the Cafe Brixton in Chinatown. Like Supernatural a few weeks ago, Fringe obtained an extension of the 11 p.m. filming curfew, polling residents to obtain permission to film until 1 a.m. for scenes of Olivia and Walter sitting in a cafe where they're confronted by a strange electro-phenomenon from which they try to escape. Two huge lighting cranes illuminated the area and police closed the block from Main Street to Gore Street for safety reasons. To achieve the special effect, stunt crew replaced the windows of Cafe Brixton with plexi-glass and then blew them out in a controlled explosion. In one scene with special effects gunfire, Olivia and Walter grab hold of each other as extras flee the cafe. 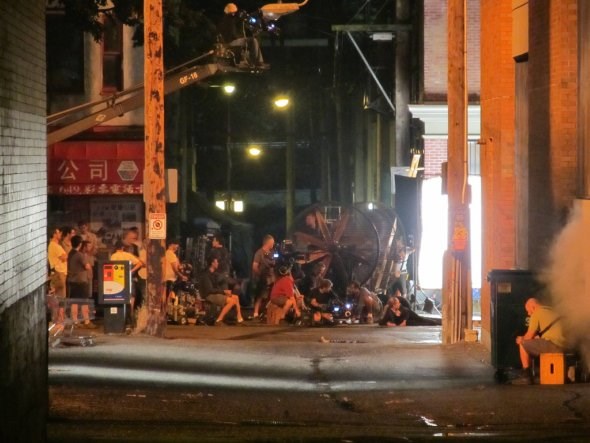 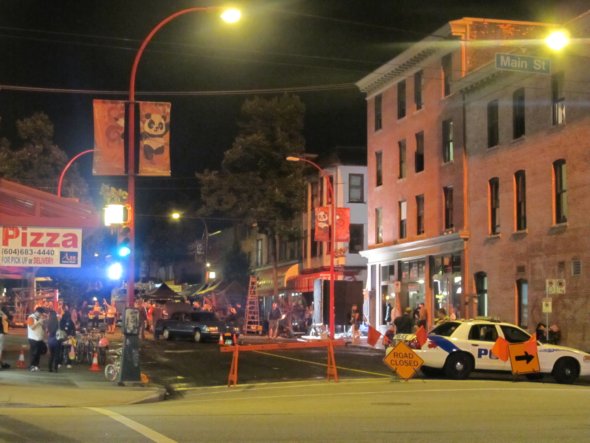 Last Thursday afternoon, Fringe filmed the aftermath of the cafe explosion, with a prop ambulance, police cars and blown-out cafe windows. I joined the International Fringe Brigade to watch the scene of Olivia walking over to the ambulance to help up a sad and broken Walter. What a contrast to the off-camera scene of John Noble, the actor who plays Walter, being swarmed by fans (see below). 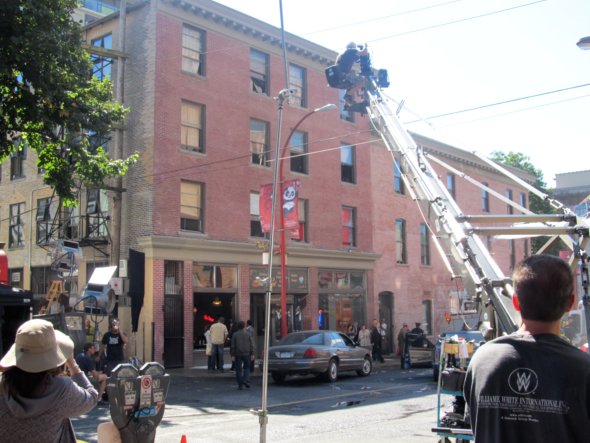 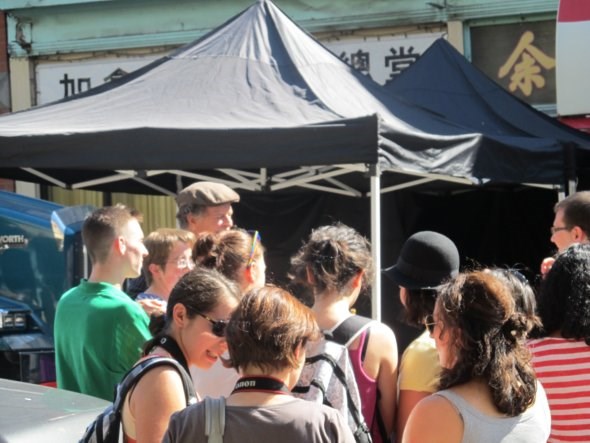 I returned briefly for the night shoot but didn't see them explode the car. One noise complaint on Wednesday night might have forced them to do it elsewhere although filming was scheduled to go to 4 a.m.

The next Joshua Jackson sighting happened last Friday when he and his girlfriend Diane Kruger were spotted downtown on their way out of afternoon movie at the Scotiabank Theatres. Grapher/blogger @LinzBarker tweeted about them signing for her, adding "They saw Planet of the Apes. Held hands walking away..."

It fits with the theory that Peter Bishop has not returned to Fringe quite yet. When Joshua Jackson emerged from The Sherburn last Wednesday night he wore a shirt with time-motion-capture tags, suggesting he breaks through Olivia and Walter's reality of life without him only briefly. Jackson is said to be back filming this week but there's no guarantee that Olivia and Walter will even know Peter Bishop when he does return. Fringe fans have a lot of unanswered questions that will play out over the season.

Update: Fringe inserted  Joshua Jackson's time motion scenes filmed at The Sherburn into the season 4 premiere, Neither Here Nor There, and the next two episodes of season 4.