Here’s our list of unique and charming pubs around B.C. that we think you should venture off the beaten track to visit if you haven’t already done so.
Oct 4, 2019 11:30 AM By: Rob Mangelsdorf 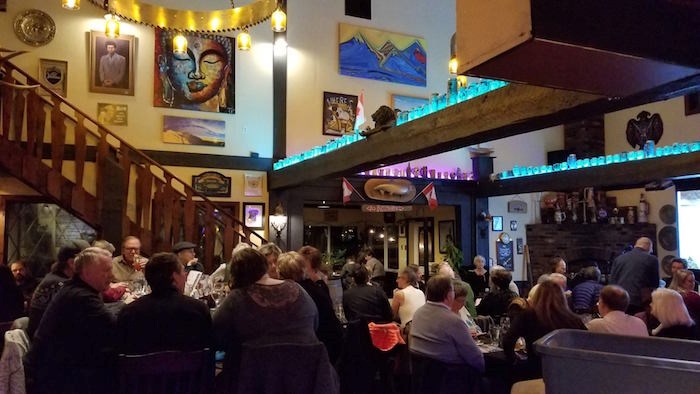 The pub is a special place, a sacred place. It serves as the living room for its community, where young and old can come together and bond over a pint, a plate of greasy food, some keno and probably a game of darts.

Before our phones and the Internet connected us, our forefathers (and foremothers) had to swing by the pub to find out all the latest juicy gossip in town. Thankfully, some traditions never die, and if you want to put your finger on the pulse of a place, the pub is where to do it.

Here’s our list of unique and charming pubs around the province that we think you should venture off the beaten track to visit if you haven’t already done so. And if you have, then visit them again. Maybe you’ll even win the meat draw! 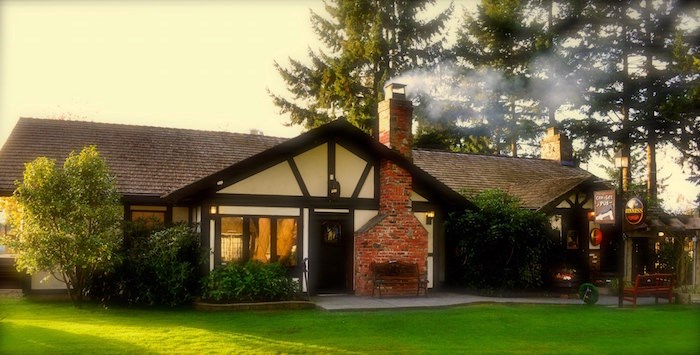 This pub could not be more in the middle of nowhere. A sign marks the turnoff from Hwy 1, and after a 15-minute jaunt past farms, trees, more farms and some more trees, you end up in a little slice of rural England, transplanted halfway between Nanaimo and Ladysmith. This Tudor-style bucolic country pub features low ceilings, dark wood, a massive fireplace and bar service only. If it feels like an authentic English country pub, that’s because it is. The original owner, Jack Nash, was a native of Sussex and imported much of the materials that went into building his painstakingly-designed pub—including the exposed timbers, furnishings, even the windows—all the way from England. Fun Fact: The Crow and Gate was the very first neighbourhood pub in B.C., opening in 1972 before the ink was even dry on new provincial liquor regulations allowing pubs for the first time.

Located in Nanaimo Harbour, just off Protection Island, the Dinghy Dock Pub is Canada’s only floating, boat-access only pub. That’s right, if you want to drink at the Dinghy Dock, you’re going to have to take a boat—or swim. Thankfully, the pub operates a ferry into town for those of us who are boatless. This kitschy pub is appropriately nautical themed; the walls are festooned with Jolly Rogers, fishing floats, life preservers and antique diving equipment. Grab a seat on the patio and watch the otters and seals playing in the harbour as kayakers and boaters pull up to the pub’s private dock for pint. Or stay inside and check out the pub’s eclectic live music lineup. After having undergone renovations this past winter, the Dinghy Dock has never been in better shape, and boasts a new and improved food and drink menu, as well.

Gasthaus on the Lake - Peachland 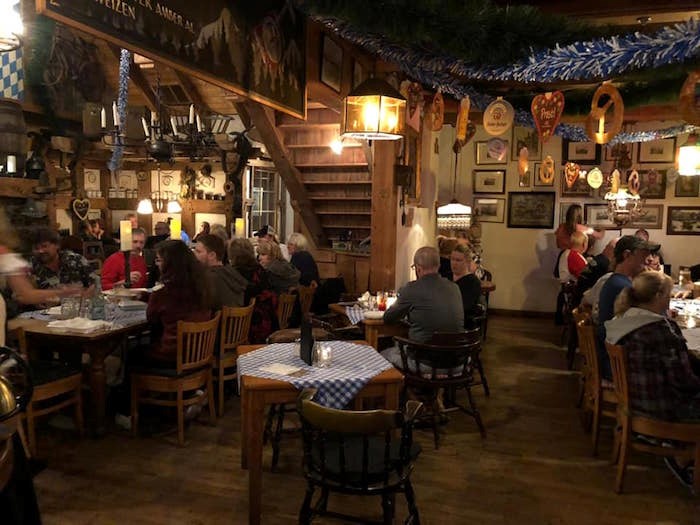 While many of the establishments on this list take their inspiration from the whimsical country pubs of the U.K. and Ireland, not so the Gasthaus. As you could probably tell by the name, the Gasthaus is very much German. Founded by Werner Fischer and Joerg Hoerath, the hand-carved log cabin pub is straight out of Bavaria, complete with an extensive German beer list and German pub favourites like bratwurst and schnitzel. In the summer, the Gasthaus’s expansive patio offers waterfront views of Lake Okanagan. In the winter, cosy up next to the raging fire in a stone hearth so massive that you could park a Volkswagen Rabbit in it. The highlight of any visit is the medieval feast, where groups of eight or more dress up in ridiculous costumes and are served a veritable mountain of meat from a 150-cast iron pan the size of a patio table.

Located at the base of Apex Mountain Resort, the legendary Gunbarrel Saloon has consistently been voted the best après ski bar in Canada, and deservedly so. The raucous log cabin pub is open from November to April when the slopes are open and attracts throngs of happy holidaymakers fresh off the hills with cold beer, hot food and good times. If you’ve had a long day on the slopes and need to warm up, try the Gunbarrel Coffee, which involves flaming liqueur being poured down a double-barreled shotgun into your glass. When in Rome! 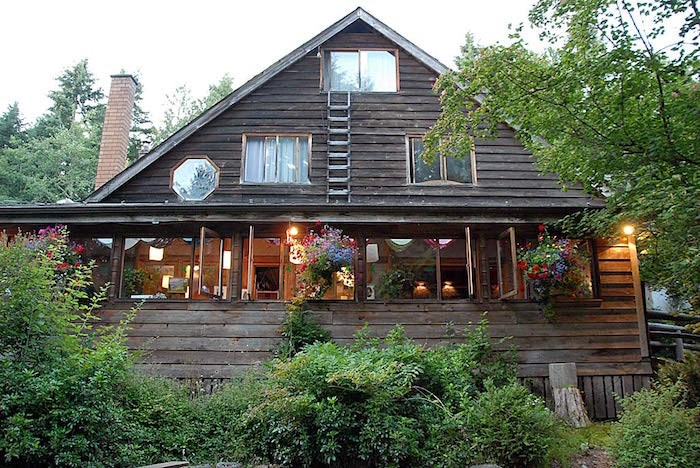 The main watering hole on the hippie haven of Galiano Island is kid-friendly, pet-friendly and replete with small town charm. The bar is festooned with aging photographs of the pub’s regulars, and the creaking wooden floorboards of this cedar cabin in the woods only add to its rustic appeal. The best part of any visit to the Hummingbird, however, might be ride there. From May to September, the infamous Tommy Transit runs a shuttle bus between the pub, the Montague Harbour Marina and the provincial campsite. Once on board the bright yellow school bus, it’s not uncommon for Tommy to get the passengers going in a sing-a-long or pick up one of the many musical instruments lying about and play along. By the time everyone gets to the pub, you’re all best friends.

Just across the Columbia River from Castlegar, about 45 minutes west of Nelson, the Lion’s Head Smoke and Brew Pub is an oasis of craft beer in Bud country. Troy Pyett and Carly Hadfield, daughter of Spinnakers founder Paul Hadfield, bought the pub in 2009 and changed its focus to craft beer immediately, facing a customer backlash when their small stock of Budweiser bottles ran out in the first hour before they sold any of the craft beer they had on tap. But they stuck to their cheeky motto: “Converting Bud drinkers and vegetarians since 2009,” and it paid off. The Lion’s Head is in a large Tudor-style building set in a picturesque location in front of a large granite rock face. It has two sunny patios, while the interior features huge saw-blade chandeliers, wood floors, and a hand-built fossil rock bar. In addition to craft beer and cider, the Lion’s Head has an excellent kitchen, featuring a variety of meats that are smoked right on-site. 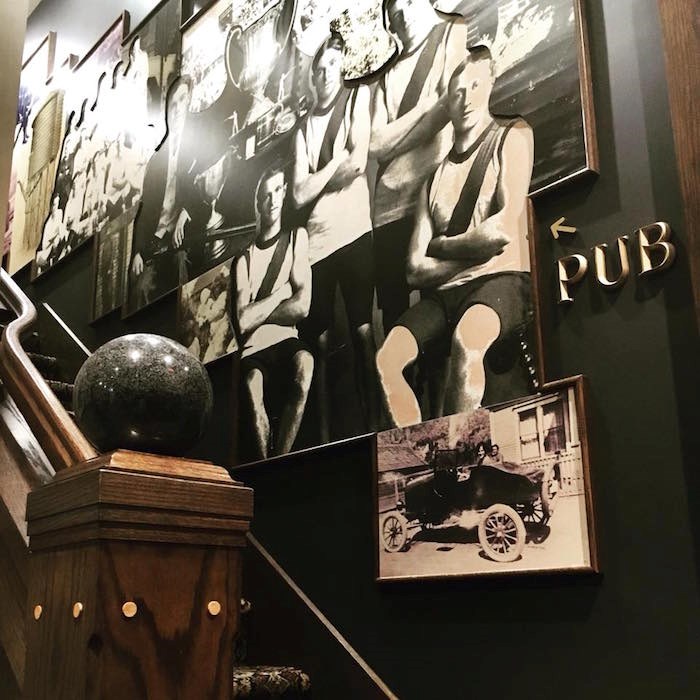 Nelson’s favourite pub since forever, Mike’s Place Pub in the historic Hume Hotel is all dark wood and dim lights and it’s just dripping in character from the leaded glass to the hand-carved banisters. The crowd is an eclectic mix of Nelson locals, with some ski bums and tourists thrown in for good measure. Thankfully, the beer list is thick with craft options, including beers from local heroes Nelson Brewing, Torchlight and Backroads. With the Spirit Bar live music venue downstairs, the Library Lounge cocktail bar next door and the hotel above the pub, there’s really no reason to leave the building.

Built in 1894 as roadhouse on the way to the bustling, but now abandoned gold mining boomtown of Leechtown, the 17 Mile House Pub is steeped in history. Located exactly 17 miles from Victoria City Hall, the former hotel was once home to Sooke’s only telephone. Today the Tudor Revival building is a charming little pub right on the edge of Highway 14 that’s impossible to miss. Inside, it’s warm and inviting, with lots of wood, brick, random antiques and pub staples like foosball, pool tables and darts. Outside, there’s a massive patio with a full-size volleyball court, a horseshoe pit, bocce ball and even an outdoor stage for live music in the summer. Fun Fact: the pub is haunted by a menagerie of spirits, including that of former owner Ma Wilson, who died in the pub in 1970, and the boyfriend of previous owner Mary Jackson, who hung himself either in the hotel or from a tree close by. Spooky!