A study suggests the average Canadian drinker receives more than one-tenth of their daily recommended calories from alcoholic beverages, but you wouldn't know it from looking at the label.
0
Aug 28, 2019 7:17 AM By: The Canadian Press 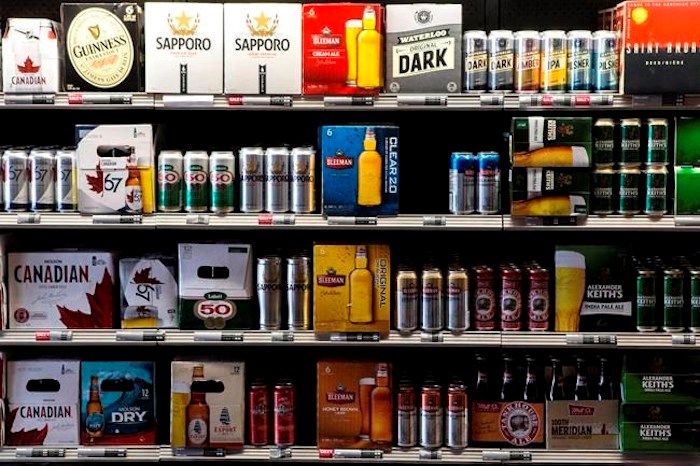 A Toronto beer store is pictured on Thursday, April 16, 2015. THE CANADIAN PRESS/Chris Young

VICTORIA — A study suggests the average Canadian drinker receives more than one-tenth of their daily recommended calories from alcoholic beverages, but you wouldn't know it from looking at the label.

Researchers at University of Victoria looked at Statistics Canada data on alcohol sales and consumption between 2015-2016 to calculate how many calories Canadians consume from booze.

The study, originally published in the Canadian Journal of Dietetic Practice and Research in February, estimates the average Canadian drinker consumes 250 calories from alcohol per day — the equivalent of a grab bag of chips.

Lead author Adam Sherk says when it comes to binge drinking, or four to five drinks per occasion, the number of additional calories rises to 550 per day, or about 25 per cent of the recommended daily caloric intake.

The post-doctoral fellow at University of Victoria's Canadian Institute for Substance Use Research says previous studies suggest people tend not to consider alcohol part of their overall calorie count.

Sherk says these findings all point to the need for nutritional information to be required on labels for alcoholic beverages, as it is for almost all other packaged food and drinks.

A spokesperson for Health Canada says alcohol is exempt from such labelling because doing so would be a complex matter given its overall impact on health.

"The short- and long-term effects of alcohol on physical and mental health, as well as its addictive qualities and potential adverse consequences are all important considerations that are unrelated to the nutritional quality of these products," said Geoffroy Legault-Thivierge in an emailed statement.

There is a risk people would infer a nutritional benefit from alcoholic beverages with a label strongly associated with food, he added.

"Decisions about drinking alcoholic beverages must go beyond looking at the label to determine the nutritional profile of such beverages."

But Sherk says labels could also be used to communicate information about alcohol's other health risks, including cancer, stroke and heart disease.

"What we're kind of putting forward here is that as a consumer and as a drinker, we have a right to know about the stuff we're taking into our bodies."

Ultimately, he said, it will be up to consumers to decide what to do with that information.

"If they want to leave their drinking unchanged, that's their prerogative," he said. "We think it's just the right thing to do from an ethical standpoint."