Signs are up, and locals are wondering when they can order their first beers and plates of pub grub
Feb 4, 2020 3:30 PM By: Alan Campbell 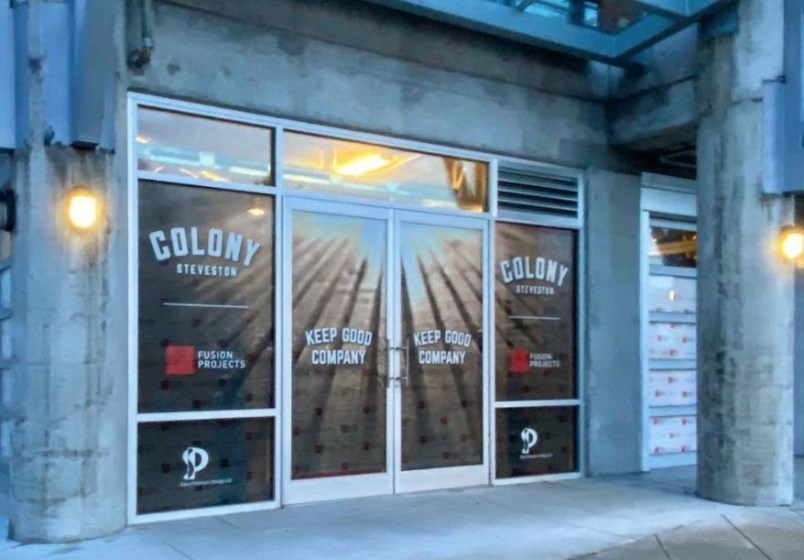 Some signage erected at a yet-to-be-opened bar at Steveston’s controversial Imperial Landing site is piquing the interest of locals.

Richmond social media platforms are abuzz with anticipation over the opening of the Colony Bar at the riverside location.

Owned by the Colony Restaurant Group – which operates three large bar/restaurants in Vancouver and one in North Vancouver – the bar put some window signage up recently at Imperial Landing.

The Richmond News reached out to the company to find out when the bar was opening, but the company was non-committal about a date, mentioning that interior construction was still taking place.

A spokesperson for the group did say that the bar was “taking shape” and more information was likely coming out later this month.

The News reported last November how leased signs finally popped up on most of the remaining vacant commercial spaces at the waterfront location.

Imperial Landing developer Onni told the News about some of the new businesses that will soon open their doors at the site, which has been the centre of a rezoning controversy over the last decade.

According to Onni, it had signed lease agreements with the likes of Goodlife Fitness, one of Canada’s largest fitness club chains.

And as well as the Colony Bar, a Thai restaurant called Bann Lao will also occupy one of the units.

A spokesperson for Onni confirmed last fall that it has started work on its waterfront hotel, which it hopes to open in late spring or early summer 2020.

After more than 10 years of battling with the City of Richmond and Steveston residents, Onni agreed to a deal with the city last June.

Colony began in Vancouver in Kitsilano, and has since expanded to add locations on Main Street in Mount Pleasant. In Sept. 2018 they opened their "Northwoods" outpost in North Vancouver, and then this year they launched in Vancouver's Granville Entertainment District.

They're known for their upscale sports bar vibe, craft beers on tap, and approachable menu.

A shop dedicated to charcuterie boards and 'grazing tables' is opening soon in Vancouver
May 11, 2021 1:05 PM