Drink the 9.5% Hermannator Ice Bock if you dare

The Hermannator My extended family is all from Victoria, and Christmas on the Island invariably involves copious amounts of Hermannator.
0
Oct 12, 2017 1:40 PM By: Rob Mangelsdorf 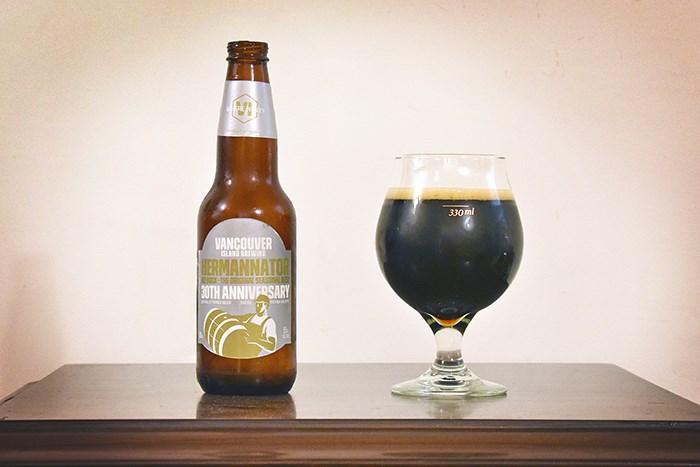 My extended family is all from Victoria, and Christmas on the Island invariably involves copious amounts of Hermannator. I can barely recall my first experience with this high-test treat some 15-odd years ago, as I mistook the mighty Hermannator (9.5% ABV) for the similarly branded (and now discontinued) Hermann’s Dark Lager (5.5% ABV) in my uncle Greg’s beer fridge.

“Hmmm, this is a lot sweeter than I remember,” was likely the last thing to go through my mind that night, as after draining six bottles in quick succession, I soon succumbed to Hermannator’s murky depths and everything went black.

It’s not an uncommon experience with this beast of a beer. Despite its robust alcohol content, it goes down dangerously easy. And at less than $14 for six-pack, it’s easy to get carried away. So consider yourself warned.

Herm has been a cult classic pretty much from the beginning when VI’s original brewmaster, Hermann, crafted the beer as a Christmas gift to his closest friends and customers. It became B.C.’s original seasonal beer release and has gone on to win wheelbarrows full of awards, including Best in Show at the 2013 B.C. Beer Awards and a gold at the 2015 World Beer Championships.

The beer itself is an ice bock, or eisbock, which is a fairly obscure style of dark, malty lager that has been partially frozen in order to remove water content and concentrate flavours and alcohol. Hermannator is cellared for three months before hitting shelves, and that extended lagering contributes to its smoothness.

This year marks the 30th anniversary of Hermannator, and there are definitely some differences in the 2017 model, most noticeably being the new packaging. It’s also the first time new VI brewer Danny Seeton has taken the reins, and clearly they’re in good hands.

This year’s edition of Hermannator is hitting shelves this week, so I’d recommend stocking up soon before it’s all gone. Available in six-packs (6x335mL bottles) province-wide, and on draft.

Body: Silky smooth and rich, with medium carbonation. The finish is sweet, but it doesn’t linger as long as you’d expect. Dangerously quaffable.

The Fall 2017 issue of the Growler is out now! You can find B.C.’s favourite craft beer guide at your favourite brewery, select private liquor stores, on newsstands across the province and online at TheGrowler.ca.