The globally-influenced sit-down spot opens this month in Chinatown

Vancouver might be one of the world's most popular cities for those who follow a vegan diet, but there has been a bit of a gap in its plant-based restaurant scene.

While there seems to have been a near-explosion of vegan, or nearly vegan, restaurants opening across the city in just the last couple of years, for the most part they've been niche in their cuisine or dining category. For example,

on their plant-focused Vietnamese offerings, and Grano is slinging fully plant-based Neapolitan pizzas on Main Street.

Then there have been newcomers on the vegan "comfort" food scene, like Beetbox and their tasty loaded sandwiches and hot and cold sides, or Planetary with their burgers, fries, and shakes. Add on the vegan bakeries, like Bonus and Level V (teamed up with the plant-based matcha bar, Whisk), the casual pub-style Cider House, and the chain venture Copper Branch, and most sectors of dining are well-covered for plant-based eaters.

So what about the in-between - something for when you don't want to dip into your special occasion fund for a multi-course intimate dinner at The Acorn, but when you want something a little more upscale than the noodles and fries at MeeT?

MILA Plant-Based is aiming to fill that gap. The restaurant, which is slated to open mid-September, is a sibling to Vancouver-born Virtuous Pie, the acclaimed pizzeria with locations here and further afield in Victoria and Portland, Oregon.

As I noted back in May, this new plant-based "premium casual dining concept" is setting up in Vancouver's Chinatown neighbourhood.

Behind the menu is Red Seal Chef Jim Vesal, who joined Virtuous Pie back in 2015. Vesal is overseeing MILA's globally-inspired menu at the sit-down restaurant (in the space that had previously been Juniper). During a menu preview meal, Vesal explained that he drew largely from the neighbourhood itself for inspiration for many dishes and ingredients, so MILA's eats feature a number of pan-Asian options, like sushi and fusion tacos with Korean flavours.

Those sushi options include a take on the California roll using hearts of palm, which is served with a tempura crumb, shredded nori, and a spicy mango wasabi sauce, as well as a take on aburi sushi, the pressed and torched calling card item of contemporary sushi in Vancouver. At MILA, the aburi is done with a carrot 'lox' to stand in for salmon, mixed with a sambal mayo and topped with a sliver of raw serrano for a little extra heat. The flavours in both rolls work nicely, and they satisfy a sort of baseline craving for those who enjoy sushi that is sauced and has multiple components (as opposed to the fish purists).

More Asian-inspired flavours abound in the Bulgogi tacos, made with soy curls, slaw, and a zippy sambal mayo, and with the seared satay tofu served with a mango-studded slaw - this dish is a little on the sweeter side.

Veering over to the other side of the globe, MILA has a pasta dish with a creamy pistachio-based pesto sauce with mushrooms and Beyond Meat sausage crumbles. Pistachio is a refreshing choice for a pasta sauce (it's quite often cashew for vegan pasta sauces), giving the dish a nice earthiness that works well with the mushrooms and sausage. 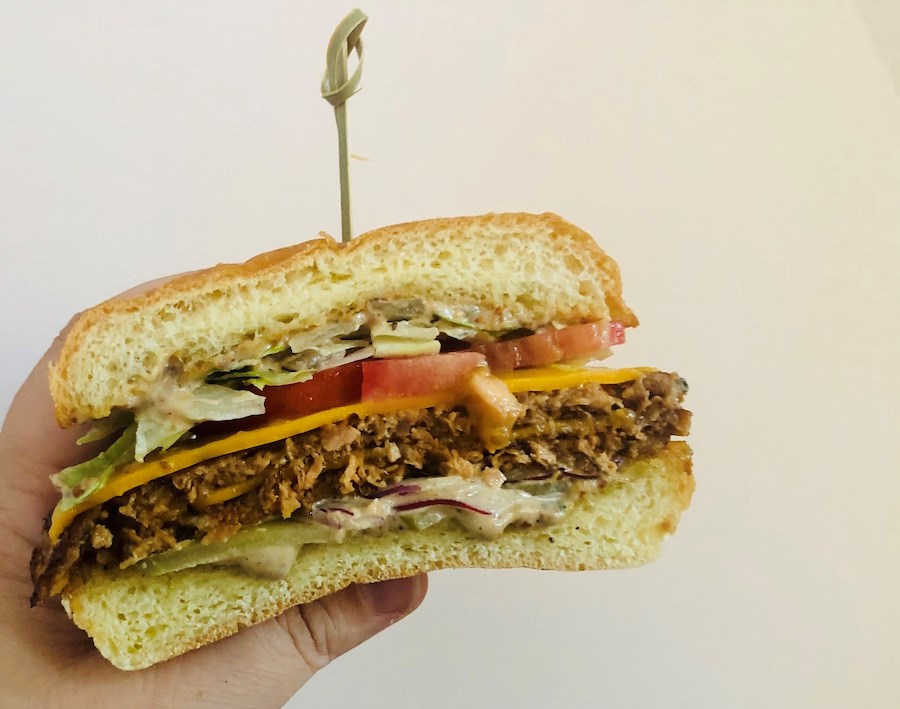 Smashburger at MILA. Photo by Lindsay William-Ross/Vancouver Is Awesome

There is a burger, too, at MILA, which features a house-made "smashburger" patty that holds its shape fairly well and gets that nice crustiness on the edges. MILA uses Earth Island slices for its "cheese," and it does have a nice melt and tastes close to a good ol' milk-full slice of American. Buns, breads, and the pasta are all brought in, which gives the restaurant plenty of room for focus on its dishes' central flavours and components.

MILA is not particularly fancy, but is more upscale than its local peers on the vegan restaurant scene. One distinction here is the emphasis on the bar program; MILA has several custom cocktails, as well as an impressive assortment of house-made non-alcoholic sodas, like Ginger Lemongrass and Kiwi Lime. For dessert, don't miss the peanut butter cup-inspired pie - it's decadent and creamy (and comes dotted with edible gold foil for that extra shimmer).

The restaurant is aiming to appeal to plant-based diners as well as omnivores. Will you miss the meat and dairy? I might be the wrong person to ask because I eat somewhere around a third of my meals as vegan, so my palate is semi-acclimated to most meat and dairy subs. What MILA does do is hit familiar flavour points on their approachable dishes, and doesn't hit you over the head with the notion that anything is 'missing,' or that you have to take down plate upon plate of raw, boring veggies in order to be doing the whole plant-based thing right.