A beautiful new book shares the history of James Inglis Reid, whose Granville Street butcher shop served as Vancouver's 'Larder of the Wise' for decades.
Oct 2, 2020 2:33 PM By: Lindsay William-Ross 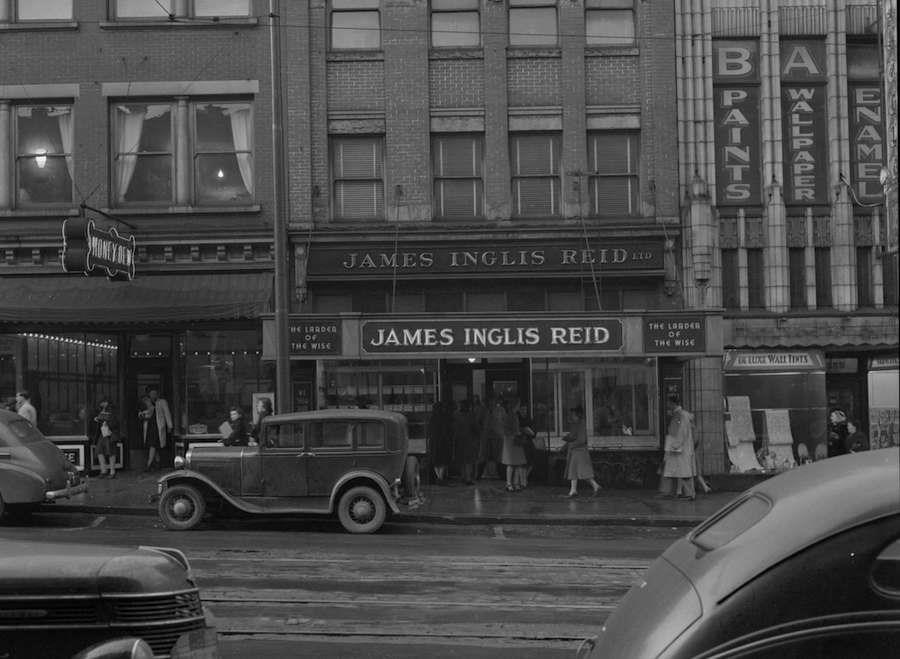 Picture Granville Street between Dunsmuir and Pender, and what do you see? Maybe it's the bus shelters with people lined up along the transit mall to catch their trolley bus ride, or the big glass windows of the Pacific Centre, Holt Renfrew, and any number of restaurants and stores.

It's hard for many of us in present-day Vancouver to see anything but this kind of scene on Granville, but for most of the 20th century, in the pre-mall era, this was a bustling district for commerce and local shoppers, home to prominent local and independent retailers.

One such business was James Inglis Reid, a Scottish-style butcher shop, which called 559 Granville Street home from 1915 to 1986 - and impressive 71 years.

The business began a few years before on Main Street, which was then known as Westminster Avenue, then was briefly located on the now-extinct Harris Street. Scotsman Reid fell in love with Vancouver and settled here, bringing over his bride from their homeland and setting up shop and deep family roots.

James Inglis Reid specialized in house-cured Ayrshire bacon, a Scottish style that was harder to find in Vancouver, as well as another traditional item, haggis, the polarizing dish made with sheep offal. Orders would come in from not just around the province for haggis ahead of Robbie Burns' Day, when its customarily eaten, but from on the other side of the border, too.

With a knack for clever newspaper ads that played up Reid as a one-location only kind of outfit, and signage on the marquee and in the shop itself with signature slogans, this "Larder of the Wise," as it was known (and announced on the storefront) was dedicated to labour-intensive processes that yielded high-quality products all made by skilled hands. Shoppers would just as easily be office dwelling husbands picking up cuts of meat to bring home to his wife for supper, as it would be discerning regulars who made the trek on the old trams and streetcars to fill their baskets for their home larders. 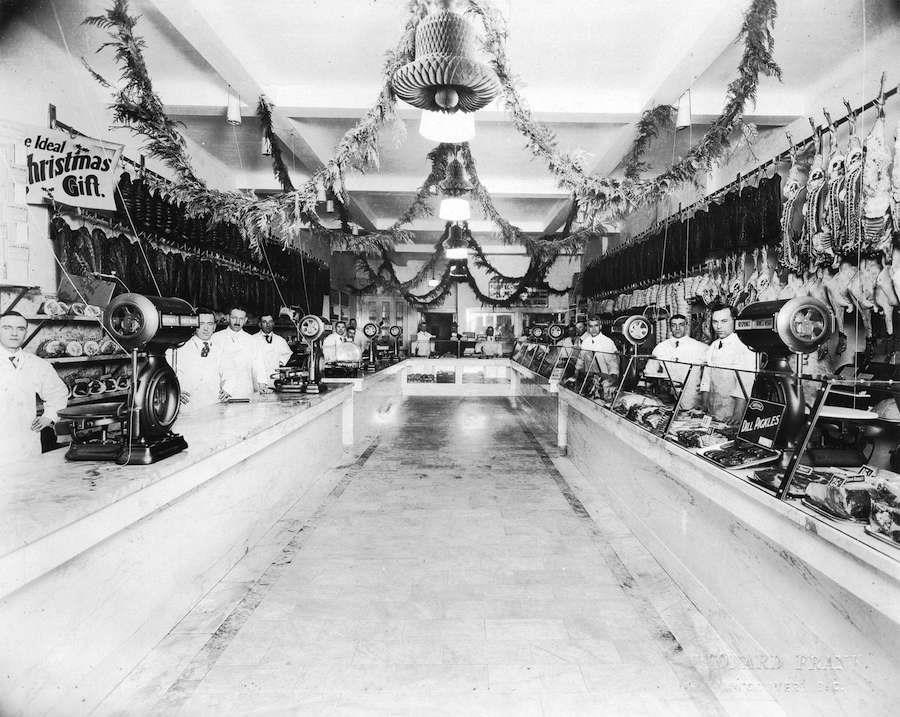 Though Reid, and his son-in-law who ultimately came to run the business, survived wartime rationing and business restrictions (such as the long span of time when retailers were prohibited to operate on both Wednesdays and Sundays in the City of Vancouver) and changing tastes, but did not survive the redevelopment of the downtown core, and with it, the arrival of the Pacific Centre.

Reid's granddaughter, M. Anne Wyness, has recently brought the legacy of her family's business back into the spotlight through a beautiful and photo-rich book called The Larder of the Wise: The Story of Vancouver's James Inglis Reid Ltd (Figure1 Publishing).

Though Wyness does include a short first-person introduction, the story of the beloved butcher shop is told in an easy-going and chronological third-person narrative, with abundant historic images of Vancouver and from behind the scenes at the shop as well, like ledger books and handwritten memos.

It's a lovely tome that will spark joy for any local history nut, with a crossover appeal to food lovers who perhaps count themselves among the many who now shop at independent "artisanal" butchers that have been enjoying a resurgence in the last decade.

I had the opportunity to ask Wyness a few questions about the book.

V.I.A.: What was the research process like? The book is so rich in detail with so many references and images of artifacts. Did you know what materials you were looking for or was it a lengthy exploration?

M. Anne Wyness: The research for the book was done over several years. I had little information about the business when it was located on Westminster Avenue/Main Street and then on Harris Street and initially focused my research on learning about characteristics of this area in the early 1900s which took time. Frequently, finding a newspaper ad or article led me to further research. For example, James Reid’s 1917 ad regarding the value of buying his bacon and including a quote from a Government pamphlet about living in wartime (p. 26), led me to learn about Canadian food regulations in the First World War. In another example, I found I had to delve into specific aspects of the planning of Pacific Centre to discuss the impact of this development on downtown businesses and the store in particular. I did have extensive business records to use as a source both in my own collection and at the Vancouver City Archives (we had donated records to them earlier). Discovering all that these records had to offer meant many hours spent sorting through them, note-taking, and analysis. Fortunately, I was familiar with many of the artifacts available to me as I had preserved these with the help of the Museum of Vancouver after the store closed.

I'm curious about the choice to refer to yourself in the third person. What was it like writing such a personal story with an academic distance?

My goal in writing the book was to tell the story of the family business in the context of Vancouver’s history. To achieve this goal, I decided to refer to myself in the third person throughout. I did not view it as academic distance, but rather as objective distance. I chose to share a more personal perspective with readers in the introduction and the epilogue as a way to ‘bookend’ the story so to speak. 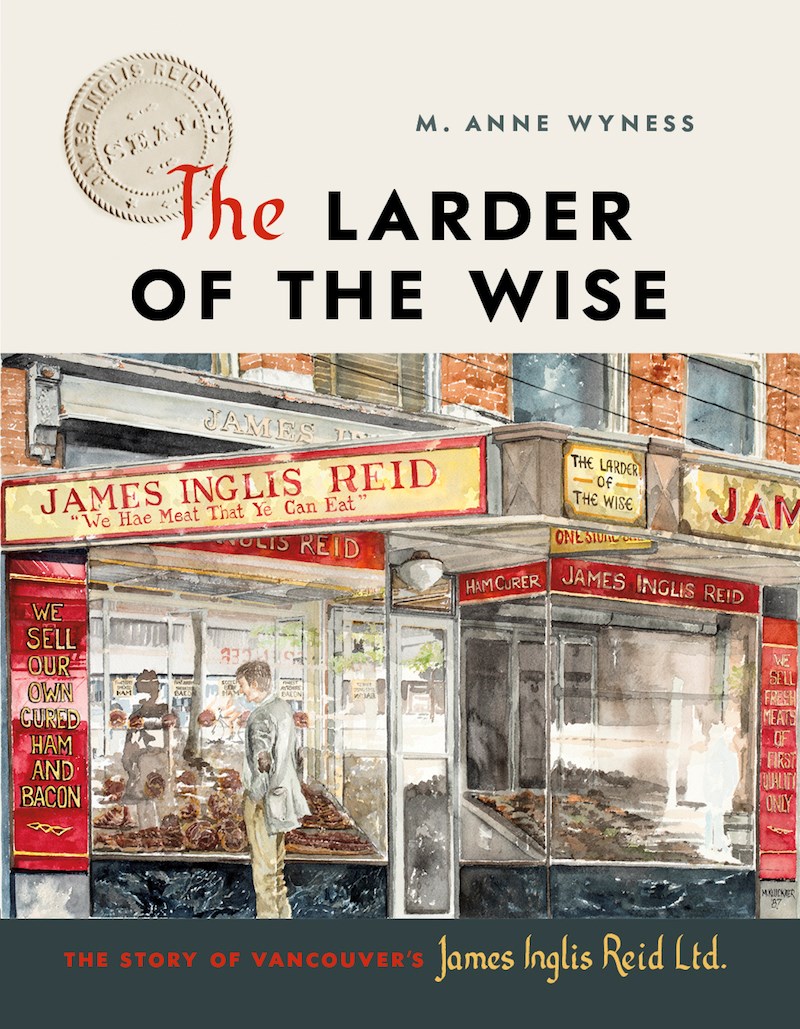 The Larder of the Wise by M. Anne Wyness. Photo: Figure1 Publishing

What are some of your childhood memories of the shop?

Being taken for a ride on the large freight elevator located in a corner of the back shop.

Visiting my father in the second-floor office – if I arrived in the morning when he was counting the cash; before taking it to deposit at the bank, it was impressive to see the money spread out and organized in neat piles on his desk.

Walking behind the bacon counter and stopping to watch Nelson Menzies as he cut the butter into one pound and half-pound amounts, checked the weight on a small scale and then wrapped it in special paper with the words James Inglis Reid Ltd. on it.

Visiting Willie Reid and my father in the cellar – because of the smokehouse, it was always a cozy place. Sometimes I was there when they were taking a tea break and conversing using sign language because Willie was deaf. In my younger years, before health regulations made it impossible, a cat named Barney
might be persuaded to come out to visit me.

In the past 5-10 years, single-focus food businesses, like butchers, have become more popular, as consumers are more driven to "shop local" and also know the source of their food. Do you wonder what it might have been like had the business pushed through the late 80s to now? Do you think the shop as it was would be embraced now in a way it may not have been by shoppers in its last years?

I do wonder what might have been possible if the decision had been made to continue in business. The current interest in this type of business was not predicted in the mid to late 1980s. A key element of the store’s success was the focus on quality and value for money and I think this focus will always attract many shoppers. Today, the business with adjustments necessitated by changing times, might well be viable and embraced by many.

Are you a fan of haggis?

I take my haggis in small amounts mainly around Robbie Burns Day, if at all.

This service station once drew motorists to North Vancouver for its novelty architecture
Jul 31, 2020 10:11 PM
Comments