Customers at a boutique Vancouver grocery store won't find racks of individually packaged goods or rolls of plastic bags in which to lug their food home.
0
Jan 31, 2019 7:29 AM By: The Canadian Press

Customers at a boutique Vancouver grocery store won't find racks of individually packaged goods or rolls of plastic bags in which to lug their food home.

The missing plastic and packaging isn't an oversight. A carefully constructed supply chain allows Nada to sell hundreds of food products without single-use packaging and add little waste to landfills. 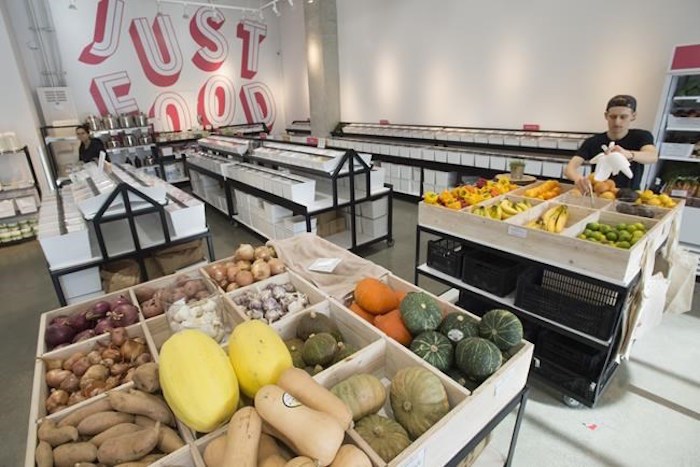 The inside of Nada grocery store is pictured in Vancouver, Friday, Jan 25, 2019. Customers at a boutique Vancouver grocery store won’t find racks of individually packaged goods or rolls of plastic bags in which to lug their food home. THE CANADIAN PRESS/Jonathan Hayward

The store's owner is part of a wave of environmentally conscious entrepreneurs who are opening no-waste markets across Canada in an effort to help Canadians and the grocery industry reduce waste amid a global garbage glut.

"There's absolutely a huge demand for this type of shopping," said Brianne Miller, founder and CEO of Nada, which opened its doors to the public about seven months ago.

The roughly 215-square-metre shop stocks colourful produce; bins of bulk items like flour, confectionery and spices; vats of oils and vinegars; and other goods that customers can buy in any amount. Single eggs and sprigs of herbs? Sure.

The shop encourages customers to bring clean, reusable containers from home to box the food. Shoppers who arrive unprepared can rifle through bins of free miscellaneous containers or purchase reusable packaging.

Patrons weigh and label their container the first time they bring it, and that weight is deducted at check out.

The few products from other companies sold in containers, like Earnest ice-cream or Avalon Dairy milk, charge a deposit fee. Those made in-house charge a high deposit fee, like $4 over the more typical $1, to encourage returns.

Nada started as a pop-up to test the market and Miller soon determined it could be a viable business model in Vancouver. The shop is now on track to break even in the coming months, she said.

She has already expanded the product offering and added a cafe that diverts what could otherwise become food waste from the market's produce section to an ever-changing menu featuring soups and other dishes.

Miller plans to open a few more stores in B.C.'s Lower Mainland in the next few years, but recognizes she faces some challenges.

While the business model is a natural complement to the plastic-free trend that hit the mainstream last year with a widespread movement against single-use plastic straws, it seems to run counter to convenience culture. Time-strapped consumers are increasingly buying groceries and takeout meals online.

One customer who stopped by Nada on a weekday morning said while she shops there every couple weeks, it requires some forethought. She must remember to clean her containers and bring them along, but that's not an insurmountable obstacle.

"It definitely means that you don't necessarily have the same spontaneous shopping," said Michelle Genttner, co-owner of soon-to-be opened Unboxed Market in Toronto.

But the stores do their best to accommodate first-time shoppers or forgetful regulars.

Customers will be able to rent or purchase containers from Unboxed, for example, or use available paper bags in a pinch.

Miller hopes Nada helps to dispel what she calls the myth of inconvenience. People who often cook for themselves could likely purchase 90 to 100 per cent of their weekly grocery haul at the store, she said, rattling off a long list of what's available including freshly baked bread and frozen perogies. Though the store doesn't yet sell meat aside from some occasional frozen seafood.

There's also the added complexity of finding producers willing and able to work with a no-waste grocer's standards.

Many of Miller's suppliers send their goods to the store in reusable containers. Some, like one local ice-cream maker, even changed their packaging to suit Nada's ethos.

But it's not yet perfect and Miller plans to spend the next several months fine-tuning the system.

One such no-waste store already closed after receiving much fanfare when it opened on B.C.'s Salt Spring Island in 2016. The Canadian Press was not able to contact Green's former owner, but others in the zero-waste community said they'd heard the store struggled due to its remote location.

However, that doesn't seem to scare other entrepreneurs from joining the zero-waste movement.

About a year and a half ago, she expanded into the storefront next door with Kitchen Staples, which uses the same concept but with bulk foods. Consumers can stock up on condiments, beans, jams, dairy and more.

At least one person a week contacts Truong for advice on opening their own no-waste market or asking to franchise her model, she said. She's got no plans for expansion, but believes there's room for entrepreneurs to create their versions in other communities and even buy-in from major grocers and brands.

Some big companies are taking note of the trend. Loop, which will launch this spring in the U.S. and France, is an online shopping platform that will deliver products in reusable packaging rather than their typical single-use containers. It counts Haagen-Dazs, Tide, Crest, and Dove among its partners.