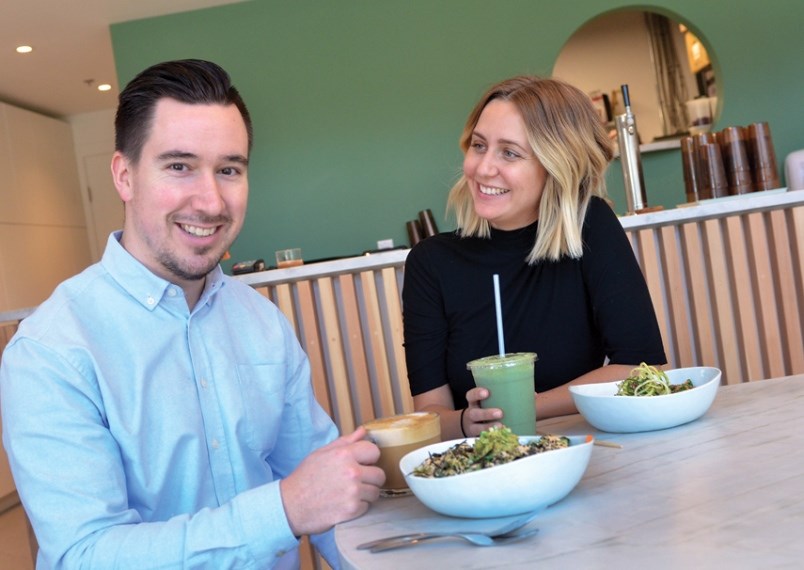 The latest downtown Vancouver expansion is from Kokomo, a funky Chinatown eatery that specializes in flavour-packed vegan cuisine. Kokomo’s Chinatown spot, at least in summertime, has an unusual liberated vibe, its rollup front walls opening onto richly textured Gore Street, flooding the space with light, air, and the sights, scents, and sounds of its neighbourhood. The inside, only 16 seats, feels much bigger as a result, with the communal seating lending itself to impromptu conversation and a sense of belonging, like those who have discovered the space are part of an obscure but desirable club.

I visited their original location a couple years back and felt oddly renewed after a signature bowl comprised of 10 or so ingredients, each prepared carefully in its own right, each contributing in a smart and considered way to the overall dish, which was, as a consequence, much greater than the sum of its parts.

In Edgemont Village, Kokomo is neighbours with fellow expansionist Bufala at the thriving Grosvenor Building, though the two concepts could not be farther apart if you devoted a think tank to ensuring it.

Like its Chinatown mothership and Kitsilano sister restaurant, Kokomo Edgemont is a plant-based operation with a small, intelligent menu that emphasizes quality over quantity. Dishes are meant to be both tasty and nutritious, with an emphasis on balanced macronutrients, the aggregate fat, protein, and carbohydrates that comprise the calories you consume. The idea behind a macro-conscious diet is that through different combinations of macro-nutrient intake it is possible to help realize certain health objectives, from weight loss to increased energy, strength building to rehabilitation.

I’m devoutly anti-fad in my food intake, but I have found that dishes from reputable establishments boasting macro-nutritional balance more often than not sate my hunger while leaving me feeling much more energized than I do after a typical meal out. Between Kokomo’s popular Coastal Macro Bowl, a bright and lively combination of pleasantly salty marinated tempeh, thick and fluffy edamame hummus, slightly caramelized roasted squash, thinly sliced cucumber, piquant cabbage pickled with ginger, greens, and sesame seeds atop a bed of pillowy brown rice, all topped with a Thai flavours-influenced turmeric and sunflower seed dressing, and, say, a big old bowl of fettuccine carbonara, there is no contest about which one leaves me feeling virtuous and which one forces me to question my life choices.

I popped into Kokomo on a recent rainy Wednesday afternoon and found the place to be hopping. It is a pleasant, brightly lit space, but as described above, falls into the category of businesses that lose something of their original esthetic charm in their secondary iterations. Nevertheless, Kokomo’s raison d’etre is fundamentally its food and here, in the spick and span newness of the Edgemont space, I experienced a dish that was truly nothing short of revelatory.

Now look, I know many people roll their eyes at the idea of famous animal protein-based dishes being interpreted with plant-based ingredients, but please take my word for it when I tell you that the Beet Poke Macro Bowl is sensational, an explosion of flavours and ingenious intermingling of textures that had me nodding my head in I-have-to-hand-it-to-them appreciation just a few bites in.

The poke reference is both to the marinated, brilliant crimson cubes of beetroot, which resembles sashimi grade tuna, as well as to the spicy (plant-based) mayo in which the cubes are tossed. The Beet Poke Bowl, like the Coastal Macro bowl, starts with a bed of impossibly plump, toothsome brown rice and greens. On top of this sits pickled ginger, wasabi scented peas, furikake (a Japanese rice garnish, here forfeiting the traditional dried fish component), ginger pickled carrot, cucumber, edamame hummus, and, of course, the pickled beet cubes. The dish is decidedly Japanese by way of Hawaii in essence, and is tremendously rewarding in its complexity, at once fresh and earthy, crispy and succulent, salty, sweet, tangy, and creamy.

I will certainly be back for this dish and I would advise anyone, even those with strong meat-leaning tendencies, to give it a go for a taste of something different.

The Kokomo menu also includes smoothies, breakfast bowls, soup, and a variety of health-minded tonics. A cooler in the venue contains plant-based goods from other local purveyors.

The two macro bowls described above came to $28 before gratuity.

Kokomo is located at 3270 Edgemont Boulevard in North Vancouver.

Note: This story has been amended to correct an error in the bill amount provided.