Vegan products are gaining traction in B.C.’s seafood sector, and at the top of the list is Ahimi, a plant-based replacement for ahi tuna.
0
Jul 26, 2019 2:57 PM By: Chuck Chiang

Atop the list is a tomato-based replacement for ahi tuna that entered the Canadian market in Vancouver in January 2018. Importers, distributors and restaurants that carry Ahimi are reporting a spike in sales as more consumers embrace vegan meat and fish alternatives whose flavour and texture are becoming difficult to distinguish from the real thing. 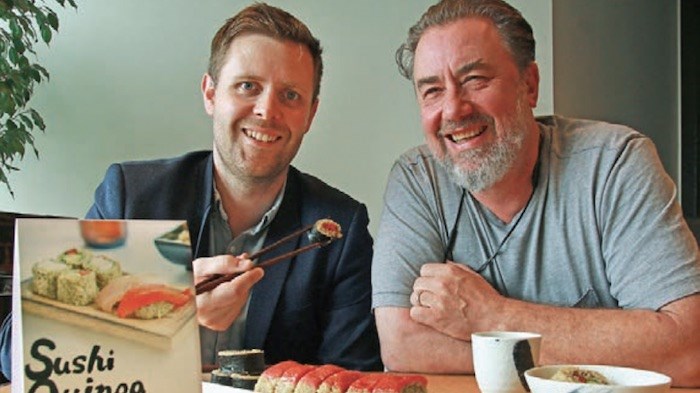 Blair Bullus and Fraser Rieche are marketing a tomato-based tuna replacement for sushi. Photo by Rob Kruyt/Business In Vancouver

“Sales have definitely picked up,” said Zachary Cho, co-founder of Westcoast Poké, the Vancouver-based restaurant that first introduced Ahimi in Canada. “We’ve had to increase orders because people are coming in specifically for the Ahimi.”

One of the key drivers of vegan alternatives to meat and other protein food staples is the introduction of the Beyond Meat brand last summer.

In July 2018, the Los Angeles-based company struck a deal with A&W Canada and quickly saw its stock sell out in Canada within weeks.

Produced by New York-based Ocean Hugger Foods Inc., Ahimi mimics the texture and taste of ahi tuna through a production process that involves freezing, thawing and refreezing tomatoes. Vancouver-based distributor Calkins & Burke said it has seen a spike in orders this year. In Quebec, Japanese chain Yuzu Sushi picked up the product this April, marking one of the first wide-distribution brands in Canada to add Ahimi to its menu.

For Fraser Rieche, who heads special projects and seafood sustainability at Calkins & Burke, the market’s taste for Ahimi comes at a key time for a distributor focused on providing sustainable seafood.

“We have been actively trying to be champions of the seafood sustainability cause for many, many years,” Rieche said. “Anything that you can do to displace a piece of dead fish is something that is working toward sustainability, so plant-based alternative fits into this equation.”

Related: This Vancouver poké shop is putting vegan tuna on the menu

According to the Food and Agriculture Organization of the United Nations, fewer than 10% of global fisheries can support larger harvests in the future; as many as 33.1%, the data says, are overfished to the point they are in danger of collapse. And while fish numbers are dropping, the industry is projecting an increase of plant-based meat markets globally – from US$11.92 billion last year to almost double by 2025, reaching US$21.23 billion.

Food industry leaders agree that Ahimi is at least partially benefiting from the vegan food craze ignited by Beyond Meat. But Cho said something more fundamental than novelty is driving the demand for plant-based protein replacements.

“I think what has made a big impact on millennial consumers is the amount of documentaries that are about the meat industry and its greater impact on the environment.”

Rieche added that new Canada’s Food Guide recommendations emphasizing plant-based foods over traditional meat proteins help spread grassroots consumer demand for alternatives. But he also noted that taste will be the deciding factor on whether a product has longevity, and that is one of Ahimi’s strengths.

“It passes the eye test, first and foremost,” Rieche said. “I’ve been in the industry for a long time and was very skeptical of this product, but the potential is very big.”

That potential could raise the profile of other alternative food products. Blair Bullus, whose Vancouver-based company, Top Tier Foods Inc., sells quinoa for use in sushi, said its products have found success by sharing a distributor with Ahimi in Canada and the United States. Many restaurants buy the products together because quinoa provides the protein that is lacking when a plant-based alternative like Ahimi is used in place of fish.

Ultimately, in a vegan-friendly market like Vancouver, Cho said there’s little doubt Ahimi and its future product cousins will open a new market segment in B.C. if given the proper time and space to grow. The toughest test – especially for a fish-replacement product that is meant to go on sushi – could be the traditional Asian market that helps give Metro Vancouver its unique culinary standing in the first place.

But even for the most stubborn sushi traditionalists, Cho said he is optimistic that exposure, perhaps through interactions with younger eaters who are more open to products like Ahimi, will win at least some of the “old guard” over to the vegan line.