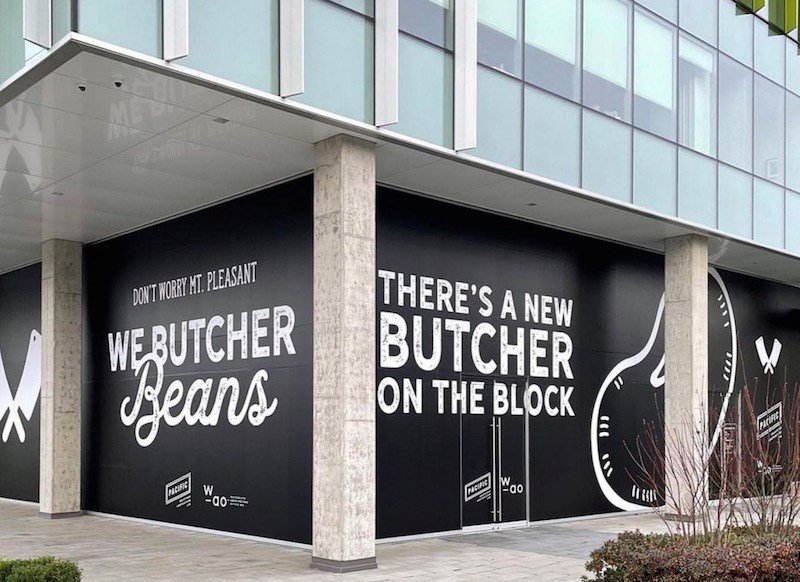 Victoria-based The Very Good Butchers, a vegan meat alternative producer, is opening a location in Vancouver in Mount Pleasant on West 5th at Alberta. @theverygoodbutchers/Instagram

Here's some "Very Good" news for fans of plant-based meat substitutes and the alt-protein curious: Victoria-based The Very Good Butchers has revealed plans to open a big location in Vancouver's Mount Pleasant.

Known for its packaged plant-based meat subs like sausages, burgers, and taco 'stuffers,' The Very Good Butchers' slogan is "We butcher beans."

"We want to make plant-based eating as approachable, nutritious and delicious as possible by creating food that’s Very Good for people, animals and the planet (while having a little fun along the way)," explains the company.

The Very Good Butchers' humble roots go back to selling its plant-based items at the Denman Island Farmers' Market before shifting ops to Victoria and getting a boost from TV's Dragon's Den.

In Victoria, The Very Good Butchers operate a shop and restaurant inside the Public Market in the city's downtown core.

Now, with product in stores across western Canada and Toronto, The Very Good Butchers has finally gone public with its plans to have a major presence in Vancouver - one of the world's best-regarded cities for plant-based eating, according to a recent ranking.

A post shared by The Very Good Butchers (@theverygoodbutchers)

"Coming to the Vancouver neighbourhood of Mt. Pleasant late summer/fall will be some sizzlin' plant-based eats," The Very Good Butchers shared on its social media, making known plans that have been in the works for some time now.

Specifically, the vegan "meat"-maker is setting up at 285 West 5th Avenue on the ground floor of the new Relic Entertainment building.

More details about how The Very Good Butchers will set up the space in the new build and what they'll offer have not been revealed as of yet, but we'll keep you posted.

Over the last couple of years, this particular section of Mount Pleasant - immediately south of Olympic Village and west of Main Street - has seen a lot of older buildings come down or be modified as new developments go up. With that change, the neighbourhood has welcomed other popular Vancouver independent food businesses with new locations, like Tacofino, Field & Social, and Purebread, among others. A few blocks away in another new build, The Yukon, is where Vancouver's independent bakery Small Victory is setting up its fourth location, in a massive 7,000-square-foot retail space.