And it can be YOURS for just under $3 million.

They don't make 'em like this one anymore. This incredibly unusual estate on the market right now didn't start out as a family home, but began over a century ago as a "power house," that controlled the electricity for one of Metro Vancouver's longest-travelling interurban streetcar lines.

The house has been off and on the market with no takers over the past three years, most recently coming up for sale again in Nov. 2020 at a reduced listed price of $2,995,000. In 2018, when we first visited the property and told its story, the property hit the market with a $3.75-million asking price. 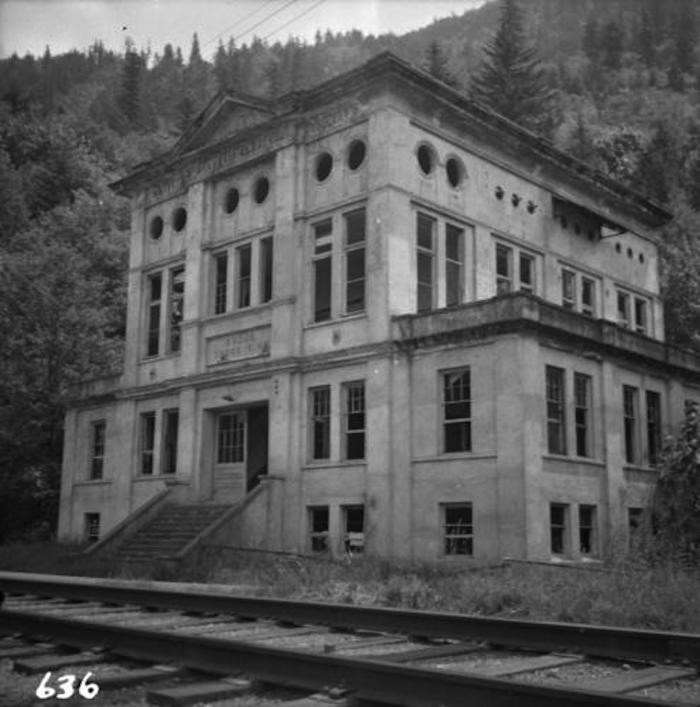 The abandoned BC Electric Sumas Substation in 1965 (Northern BC Archives)

Known as the "Sumas Substation," or, to many locals, simply "The Power House," the mansion at 39623 Old Yale Road in Abbotsford was built in 1906 by the B.C. Electric Corporation. The Power House, made of concrete, steel, and brick, housed all the equipment for powering the Fraser Valley Line of Vancouver's vast interurban longer-haul commuter and cargo streetcar system, connecting Vancouver with Chilliwack and communities in-between.

The Fraser Valley line went into service in 1910, however, by the mid-to-late 1940s, the BCER was already looking to change how they moved people through the region. They launched their "Rails to Rubber" program in 1948, kicking off a decade of decommissioning the network of interurban streetcars and converting Vancouver's web of streetcars into trolley bus lines.

This video from around 1950, narrated by a former operator, was shot from a BCER Interurban running east from downtown Abbotsford to Chilliwack. At about 2:44 in the video you will see the Power House on the right, as the train approaches its companion station, Vedder Mountain.

"Car 1311 left from Chilliwack in the morning heading west. Cars 1310 and 1307 departed New Westminster with a full load of officials, seniors and retired Chilliwack line employees. These trains met at Langley Prairie at noon, touched cowcatchers and then the passenger service on the Fraser Valley line ended. At the conclusion of these ceremonies, the three cars of the two trains were joined together and deadheaded to the New Westminster yards; all officials and guests completed their journeys on the buses."

Although the rails still exist and belong to CP Rail now, the Power House was useless to BCER as of September 20, 1950. And so they basically abandoned it. 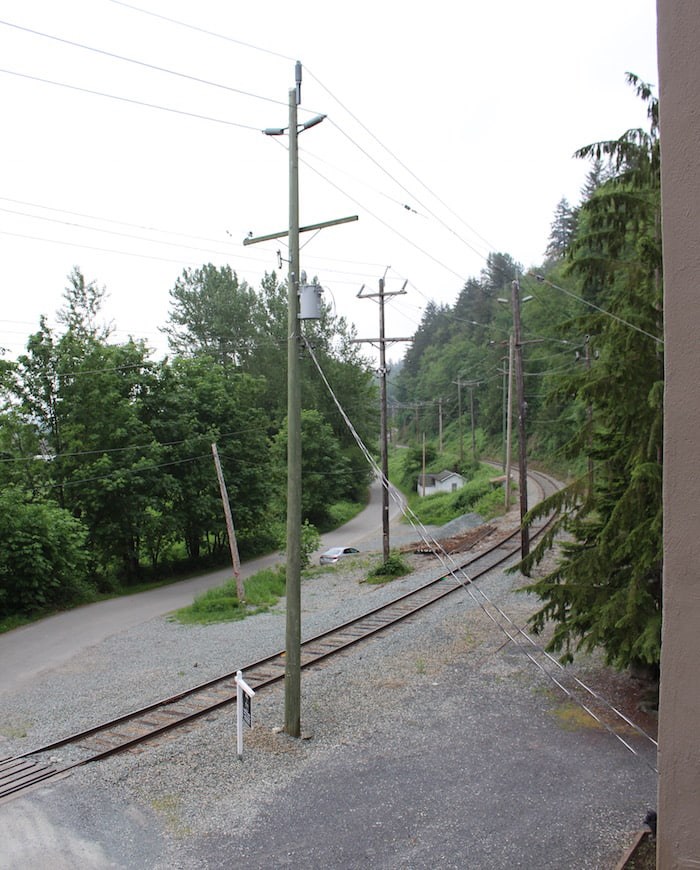 There isn't a lot of easily accessible information out there about the Sumas Substation; BCER ended up fragmenting its business after being taken over by the province in 1961 to create BC Hydro, and selling the rights to rail lines. There may be a treasure trove of paperwork and other documentation from the early 20th century at BC Electric filed away somewhere, but there is very little online except some anecdotes, images of the abandoned substation from the 60s, and current photos of the re-purposed space.

One such online tidbit includes a relative of a one-time chief engineer posted to the Power House who says the man was the victim of an unsolved murder.

Here's a short undated video that shows the home prior to when the current owners did their renovations:

But the building as it is today is pretty magnificent. Having been a draw for squatters for several years, the Power House wound up being an artists' colony of sorts in the 80s, then was a private residence for many years, with the current owners having taken over about 15 years ago. For them, renovating and restoring the space has been a true labour of love.

Just shy of 13,000 square feet, the Sumas Substation estate boasts eight bedrooms, five kitchens, two large lofts, a wine cellar, a theatre room, and four large balconies, split on four levels, including two rental apartments with their own entrances and a legal third suite in the main residence; rental income could feasibly constitute over half the estimated monthly mortgage payment for the new owner. 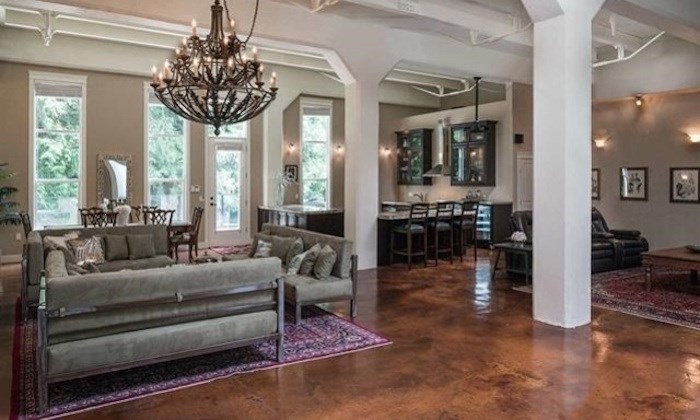 It's easy to read the specs for the listing and get an idea of how massive the place is, but it's another thing altogether to see it in person, and the listing agent was kind enough to show me around the home, and it was pretty mind-blowing.

The rail track still sits right out in front of the home, and restored lettering spells out SUMAS SUBSTATION above the enormous (custom) front door. The porthole-style windows were once functional for the powerhouse (and appear to have been open-air historically). What was the space that housed some sort of line-related outbuilding for the Fraser Valley interurban is now a serene picnic area for the homeowners and tenants, and a stream babbles nearby as the mountains loom behind. 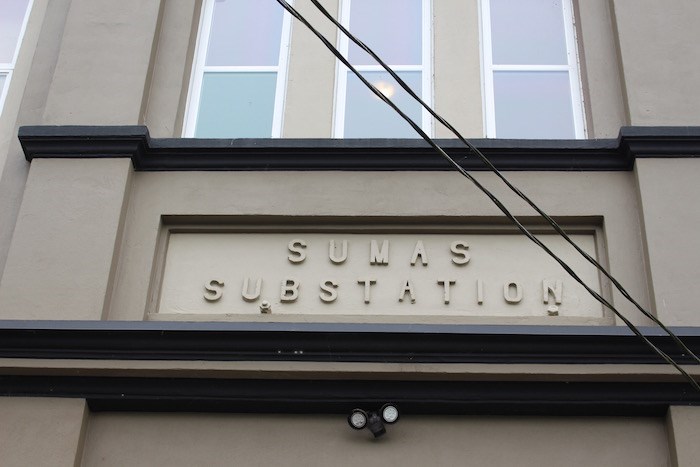 The homeowners, who have listed the estate before but not yet found the ideal buyer (and now are asking $3,750,000 for the home), have taken painstaking care to work with the distinct features of the home while making it a livable space. That means the floors are acid-stained concrete, and in many places show the deep scars from prior machinery.

They have created a floor plan that makes sense for the space, and have creatively taken what used to be (we can only imagine--no one can find photos of the interior from its heyday) jam-packed with equipment and carved out a luxurious home. 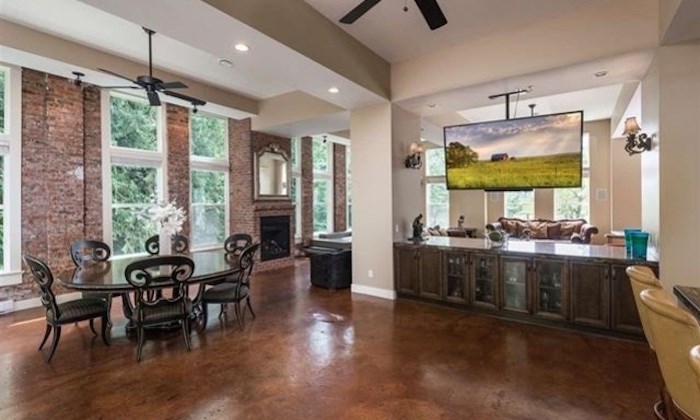 The details that stand out are often those details that come from the building's deep history. The exposed brick walls were, well, exposed to be a design feature, and there are touches like barn-style doors with pulleys adapted from materials found on-site, and posts on the stairway that was original to the property (though obviously the stairs were rebuilt to contemporary code; the original ones were described to me as being fairly rotten and clearly unsafe). 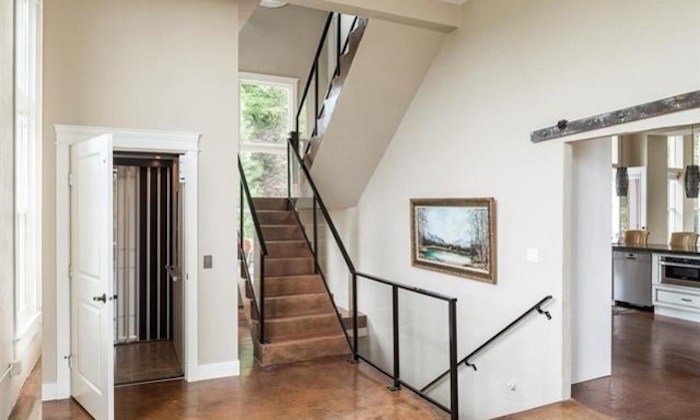 You can see the concrete floors, the elevator installed in place of a previous shaft, the stairs–including a post at the landing that is adapted from the original (Photo via RE/MAX All Points Realty)

An elevator added in takes the space of a former equipment shaft, and you can pop open some sort of built-in cubby in the wall that has some markings from the builders from over 100 years ago.

The portholes are worked into the design of the upstairs rooms, so they give light in the bathrooms (even in the shower) and bedrooms, as do massive floor-to-ceiling windows that let light flood into the previously industrial and more closed-off spaces. 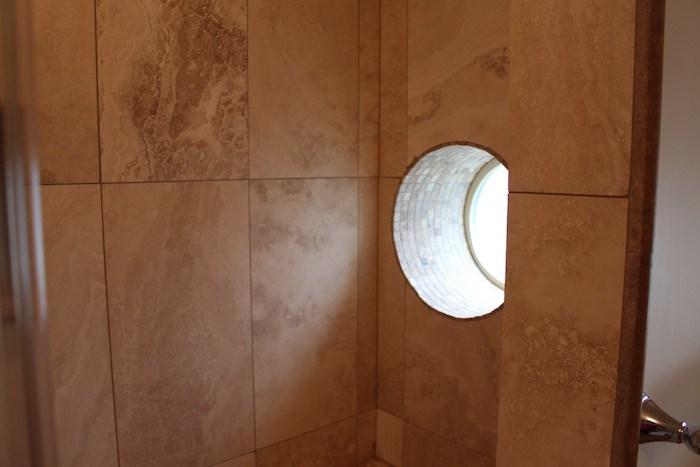 The balconies were added by the current owners and would make for some pretty amazing gatherings. Then there's the roof, which you can get to by climbing a narrow (and original) ladder "grandfathered" into the home and popping out of a small hatch; the view from up there is pretty stunning with much of the Fraser Valley spread out in immediate view (not to mention, considering all the concrete used in the building, it's quite solid for a rooftop--though perhaps not as solid as a prospective homeowner plotting to add a pool up there might hope; a rooftop pool is, alas, a no-go). 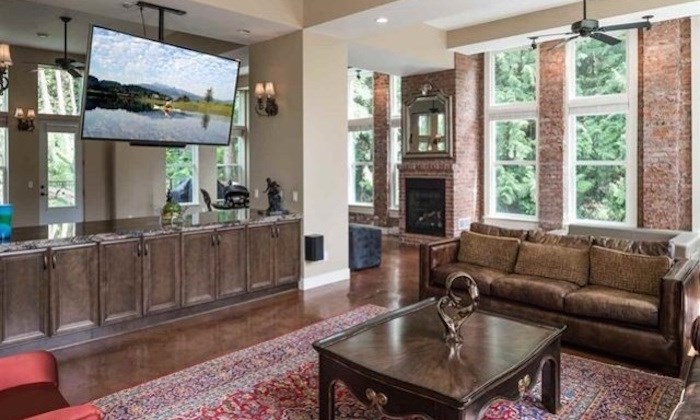 Because this was such a special place for the current owners, their listing agent relayed to me that they hope to find the right kind of buyer who will respect the building's unusual backstory and all of the work they've done to turn it into an incredible private home unlike any other you've ever seen. Interested and have almost $3 million? Here's the listing.

And here are more photos of the property: 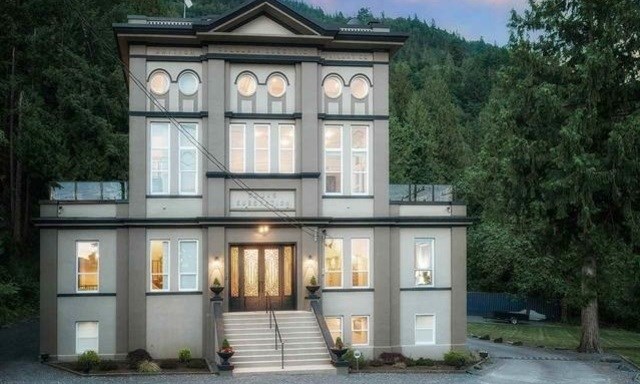 Photo via RE/MAX All Points Realty 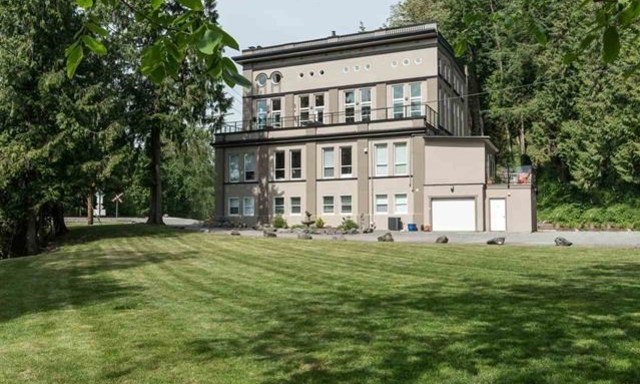 Rear of the property (RE/MAX All Points Realty) 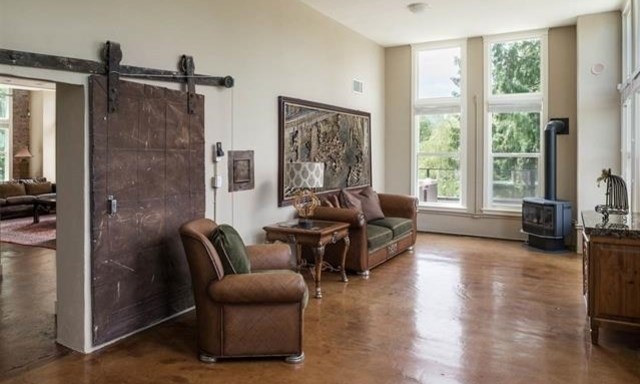 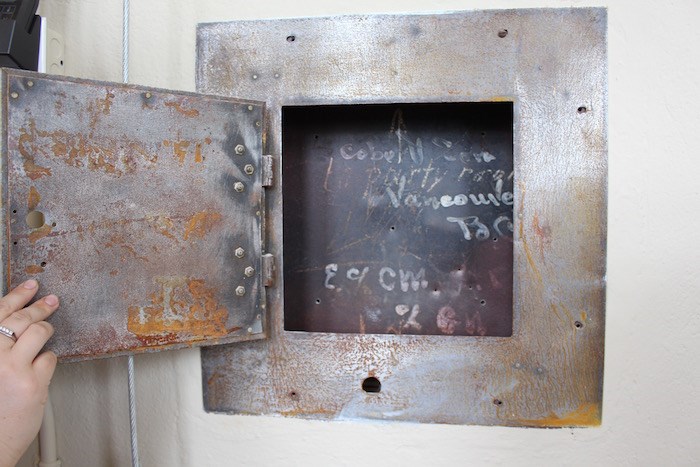 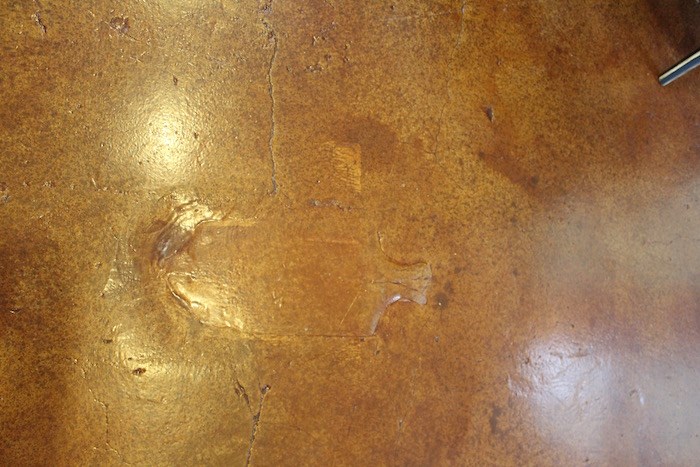 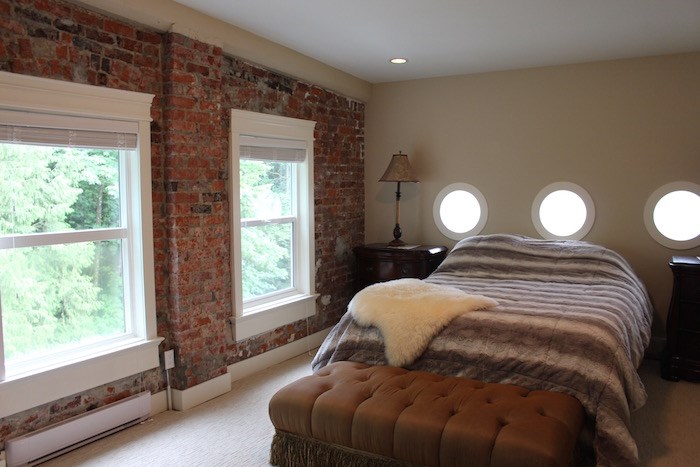 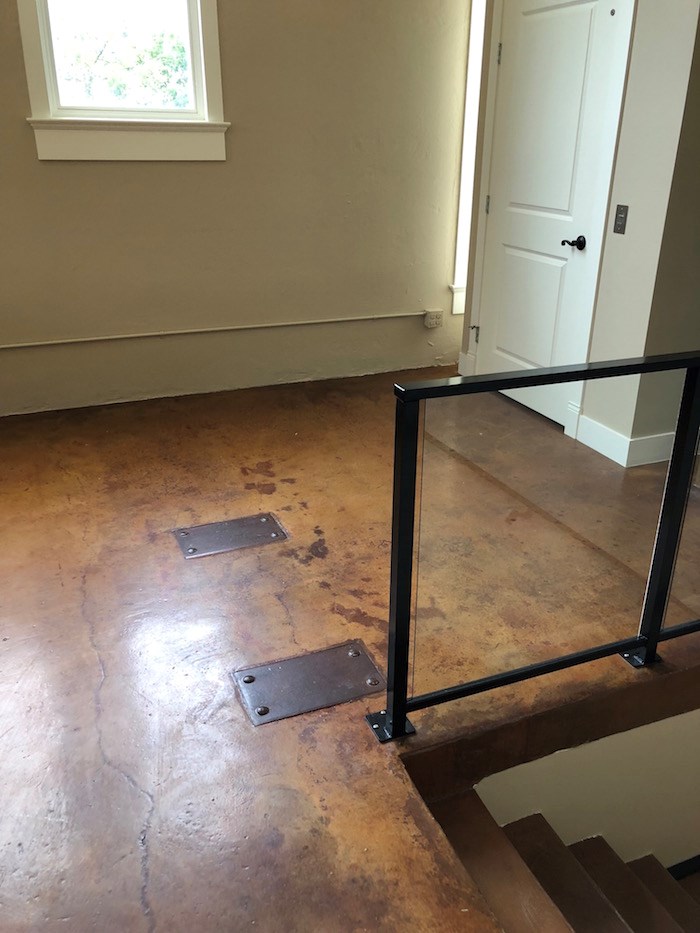 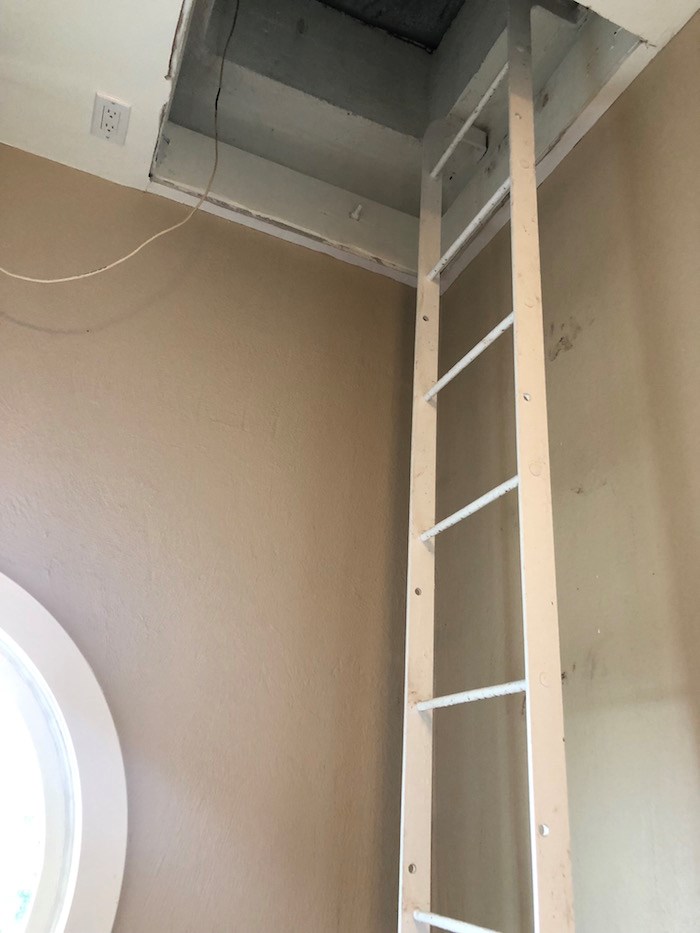 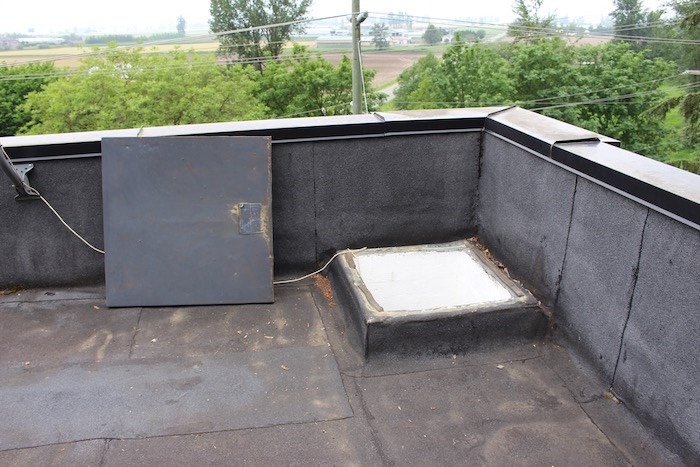 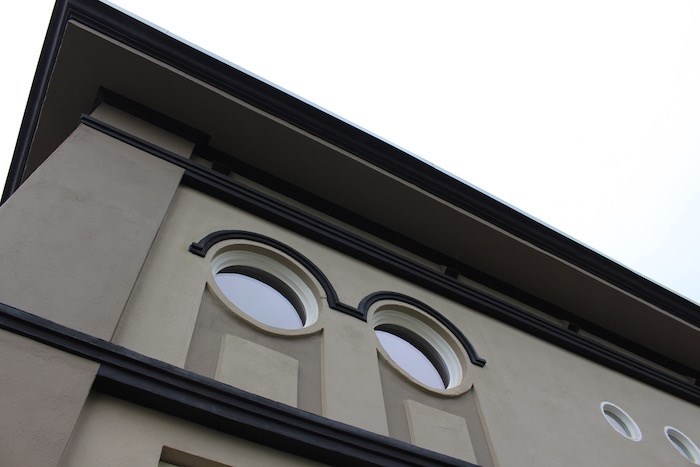 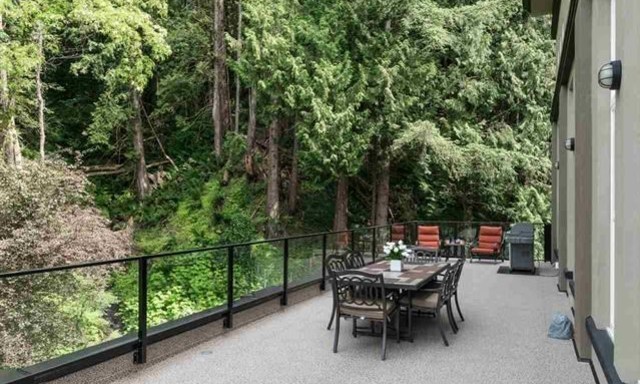 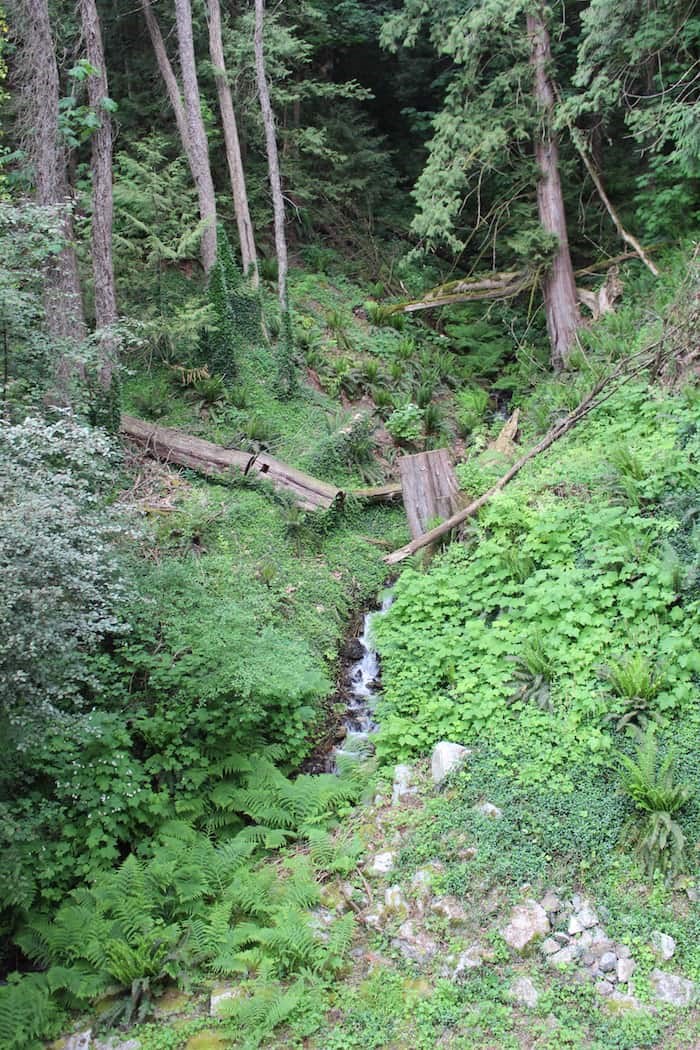 A stream on the property (Lindsay William-Ross/Vancouver Is Awesome)

Editor's note: This article was originally published on June 6, 2018 and has since been updated with new information