OPINION: Andrew Weaver got his best stranglin' gloves on to murder the BC Green Party 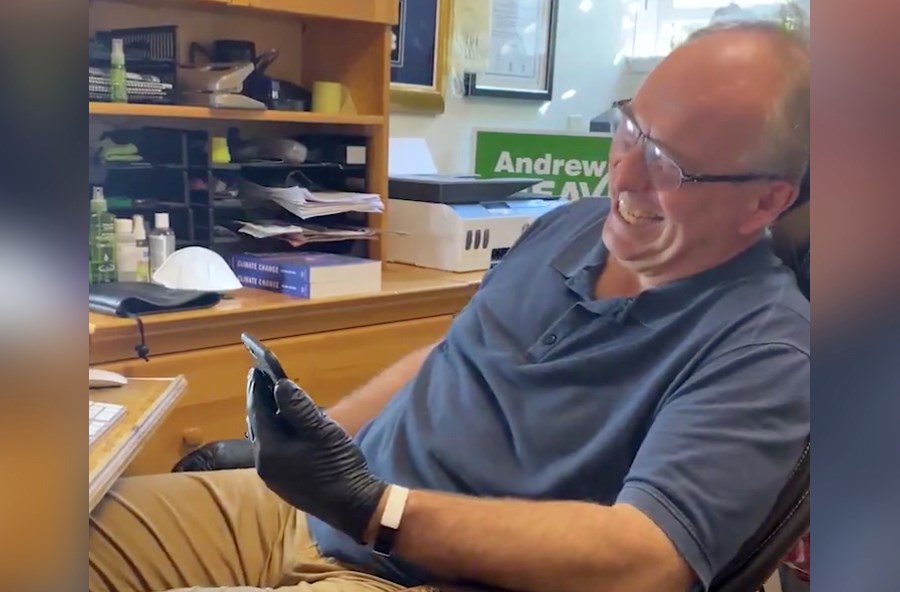 A somewhat confounding video was posted to social media by premier John Horgan's election team on Oct. 15. It shows him speaking to former BC Greens leader, Andrew Weaver, who happens to be wearing a nice pair of black stranglin' gloves.

If you haven't been following along closely, Horgan's campaign has been producing and sharing a series of "phone call" videos, distributed through his Instagram, Facebook, and Twitter accounts.

The setups are meant to look as though the premier is randomly calling up supporters (who happen to have film crews waiting in their homes), thanking them, touting what his party has done and what they plan to do, should they again form the government after the self-serving election he called wraps up this Saturday.

He called Meredith, a nursing student in the Skeena riding. He called Sam, a first-time donor in Prince George. He called Sue in Nanaimo, and others.

In the caption for the video featuring Weaver, Horgan notes that "this guy was at the top of my list," to call.

In it, the premier and the former Green leader joke around like old disc-golf pals, then Horgan says "I gave you a shoutout," during their platform release announcement, at which he thanked Weaver for "being instrumental" in the creation of the CleanBC sustainability plan.

This is the peak of Weaver's betrayal of the party he used to lead, and is an attempt to get BC Green Party supporters onside with the NDP, to help prevent a vote split between the two.

Why is Weaver doing this?

The bad blood started back in January, when he announced that he was abandoning his party and sitting as an independent, stating then that it was due to a family member's health.

He could have stayed on with the party and taken on fewer duties, but it was later revealed (by him) that there was a rift regarding the direction of the party. So he left.

That must have been one heck of a rift, as he has recently come out swinging at the Greens (starting with a scoop we published), and encouraging people to vote NDP.

One has to wonder if there aren't more factors at play here, one being the ego of a man who is perhaps so upset that he got edged out of a party, that he decided to strangle its chances of winning any seats in the next election.

We'll see from the results if the charge on that will be attempted murder or first degree. It sure as heck won't be manslaughter.

Sat down to call some supporters and this guy was at the top of my list. Professor @AJWVictoriaBC, I'm so proud of the work we've done together — especially CleanBC. I'm going to miss you. But I've got your number for any climate advice or Rugby games. #BCelxn2020 #bcpoli pic.twitter.com/cBKaRhXXed

IMPORTANT NOTE / NOTE TO READERS about mail-in ballots: Due to the anticipated number of mail-in ballots, the election night vote count will not be complete. The Canadian Press will continue to publish updated riding results to the map and banners as available until counting is complete