The signs are subtle so far, but they may represent the first downdraft in Metro Vancouver’s multi-family apartment building market after years of record-snapping demand and prices. And yet, multi-family investment insiders remain confident of future performance.
Frank O'Brien Aug 29, 2018 6:57 AM

The signs are subtle so far, but they may represent the first downdraft in Metro Vancouver’s multi-family apartment building market after years of record-snapping demand and prices. And yet, multi-family investment insiders remain confident of future performance. 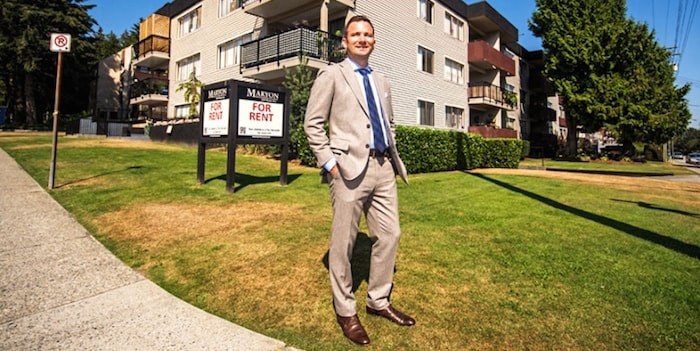 David Venance, vice-president of JLL and a multi-family specialist, at a 42-unit, 48-year-old Coquitlam rental apartment building his team sold this summer for the equivalent of more than $138,000 per suite. (Photo: Chung Chow)

The warning signals include a rush of new purpose-built rental buildings, an increase in rentals due to a housing sales slump that has shoved more rentals on the market and extremely skinny capitalization rates. And, of course, upcoming changes to the B.C. Residential Tenancy Act that many believe will tilt regulations in favour of tenants.

If a correction is coming, however, it has yet to show up in sales and prices of apartment buildings that have continued a sizzling pace this year.

During the first half of 2018, 89 apartment buildings sold in Metro Vancouver for a total dollar volume of $1.4 billion. This is up from the same period in 2017 when 87 buildings sold for a total volume of $1.3 billion. The most dramatic change is in the price per suite: this year it is an average of $494,723 per door, up 21 per cent from the first half of last year, according to the Goodman Report 2018 Mid-Year Review, published by David Goodman and Mark Goodman of HQ Commercial.

But multi-family investors speculating on future land demand without the necessary zoning in place will face headwinds.

“We are seeing property sitting on the market because the vendor is wanting to achieve development values but there is not a subscribed redevelopment plan in place for the property; it is only speculation,” said David Venance, vice-president and multi-family specialist with JLL Canada in Vancouver. “[Such properties] are perceived as being overpriced.”

With an average multi-family capitalization rate of 2.8 per cent, most investors are unwilling to risk such low yields on a speculative play, Venance explained.

He said investors should check the local municipality’s official community plan and zoning parameters to know if there is a potential for a rental property to be developed into higher-density residential.

Another spook in the rental space is the spectre of an inventory spike in a market accustomed to the tightest vacancy rate of any major Canadian city.

In the city of Vancouver, the number of rentals available in July increased 15.1 per cent from the same month a year earlier to 5,319 listings.

“Summer is usually tight relative to the rest of the year for rental supply, but we saw more listings this July than any month in 2017,” said Louie Dinh, a data analyst at Quantitative Rhetoric. Dinh compiles his information from online rental advertising listings.

He added that Vancouver rent increases have stalled, albeit at nosebleed levels, since January. Current advertised rents in Vancouver are $1,950 for a one-bedroom, with two-bedrooms at an average of $2,650 per month.

Dinh suggests the increase in rentals is linked to the 30 per cent plunge in housing sales this year in Metro Vancouver compared with 2017.

“Now that price growth has stalled, owners have to generate cash flow to cover their costs. Therefore, we should see more rental listings,” Dinh explained.

As well, there are now 17,296 new rental units under construction, approved or proposed across Metro Vancouver, the largest purpose-built rental construction blitz in decades. So far this year 1,265 new rentals opened. It could take five years for all the new product to complete, however.

Mark Goodman is among those convinced Metro’s multi-family market will continue strong, despite recent challenges. He points to high immigration levels including a record level of foreign students, a 0.9 per cent rental vacancy rate and low-cost, long-term government-insured mortgages for multi-family projects as reasons for confidence.

“The market is very much alive, if not thriving,” Goodman said.