Why Butchart Gardens should be on your B.C. bucket list (PHOTOS)

If you haven't visited this century-old historic attraction, you are seriously missing out

The Butchart Gardens aren't exactly off the beaten path - at least not when it comes to the notion of tourist attractions in and around Victoria. Maybe that's why a lot of Vancouverites have opted to skip checking out the century-old venue on the outskirts of the city. But to not check out these incredible gardens and green spaces in a historic setting is really to miss out on a little slice of serenity and awe.

Not surprisingly, when your story dates back to the early years of the 1900s, an attraction like The Butchart Gardens has an extensive, and well-documented, backstory. The family-run gardens began somewhat humbly when Robert and Jennie Butchart uprooted their lives back east in order for Mr. Butchart to build a cement plant on the site of a limestone deposit at Tod Inlet.

Mrs. Butchart, however, saw the grounds of their new business and adjacent home as an opportunity to develop her green thumb. She started work on creating sweeping gardens, starting with a massive quarry that became the Sunken Garden. The soil was moved one load at a time by horse and cart - and Jennie Butchart even enacted a plan to liven up the stark grey quarry walls: she dangled herself in a bosun's chair in order to tuck ivy wherever she could into crevices amidst the rocks.

When you enter The Butchart Gardens, the Sunken Gardens are your first destination on the map, and they will absolutely take your breath away as you descend the path.

The Sunken Gardens took nine years to create, and feature 151 flower beds. Each spring, 65,000 bulbs are planted in just that one garden. 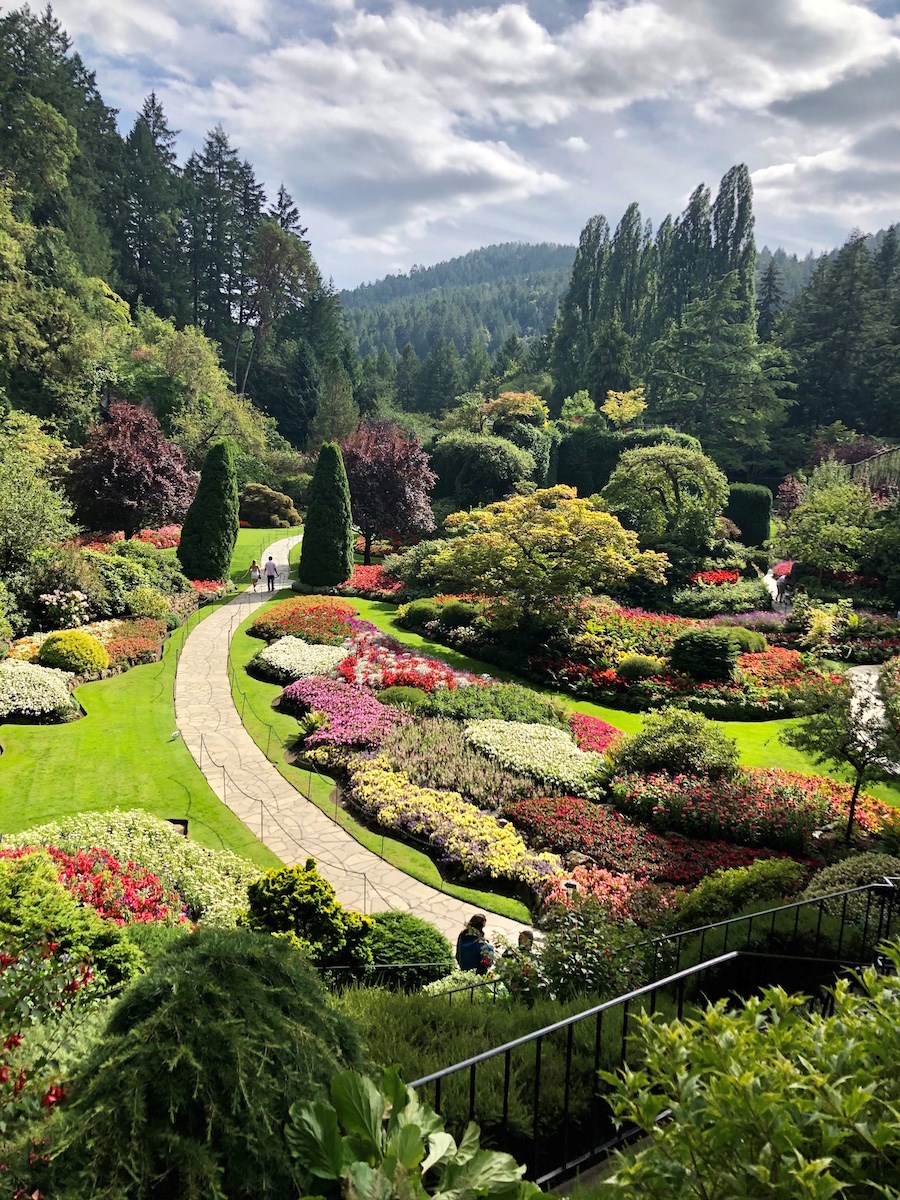 Heading into the Sunken Garden. Photo by Lindsay William-Ross/Vancouver Is Awesome

Spoiler alert: At the farthest reach of the garden, you get to the quarry, where a water fountain shoots up in choreographed patterns.

Of course, this is just one of the gardens you'll stroll through at Butchart. As the years progressed, and her gardens became a popular draw, Jennie Butchart added on more themed gardens. You'll pass through the original grand Torii gate to access the Japanese Gardens, which is home to a whopping 500 rhododendrons and azaleas, and 74 Japanese maples. A stream trickles through the gardens, and you can hop across its modest expanse on stepping stones, and walk over charming little red bridges. Here, it's cool and dim and peaceful - a contrast to the wild riot of colours you'll find elsewhere at Butchart.

It's tempting to get heavy on the narrative here, which is no substitute for being in the gardens in person because it's impossible to not consider the tremendous amount of work and care that goes into creating this spectacular place season after season.

Flower lovers, shutterbugs, and Instagrammers, this place is seriously full of treasures.

I about lost my mind passing the dahlia section, which isn't even a garden of its own, but more of a transitional space. Dahlias are dazzling when it's just a couple of stems, thanks to their crazy petal patterns and wild colour palettes. How many photos of dahlia blooms close up can one person take? (The answer is: A LOT.)

The formal Rose Garden is packed with 2,500 rose plants, representing 280 varieties of roses. Work those poses under the 30 rose-covered arches while you're at it - just be sure to keep the required two-metre distance between you and the other groups weaving their way through the gardens.

While typically summer is the peak season for visitors to Butchart Gardens, because of COVID-19 travel restrictions the tour buses aren't lining the parking lot and tourists aren't pouring in from abroad to check out this historic site. Still, The Butchart Gardens have some stringent COVID safety measures in place, including one-way traffic on the paths (which determines the order in which you'll experience each garden), group size restrictions, and lots of hand sanitizing. Each year there is a variety of seasonal programming to check out, too, but so far the pandemic has forced the gardens to cancel the traditional concerts and fireworks this year. 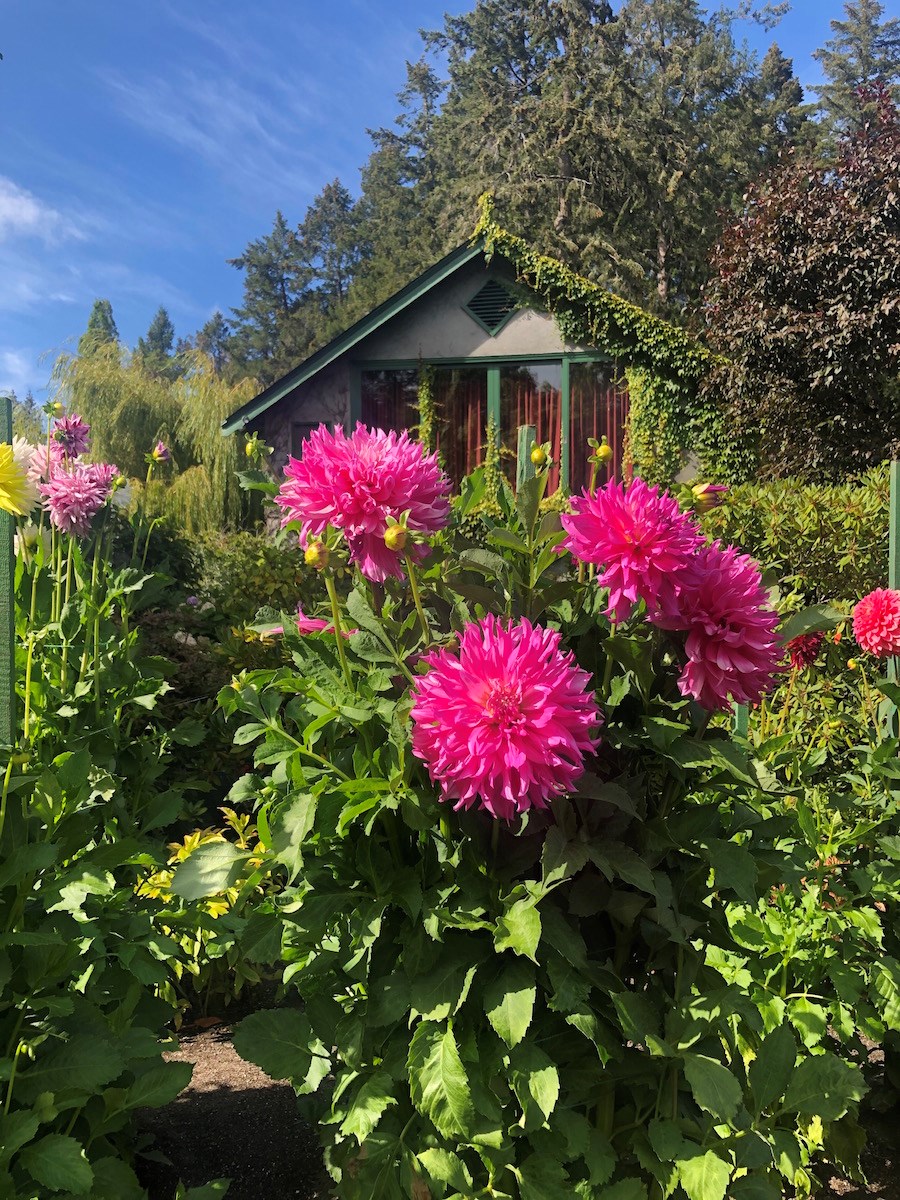 But you can still sit down and enjoy a cone from Benvenuto Gelateria in the Italian Garden in the summer months, and the Coffee Shop and Dining Room are open for service. Don your face mask to shop in the gift store - they do ask that you put anything you touch in your basket, and staff will sanitize whatever you don't end up buying before it goes back on the shelf. Everything feels safe and organized.

The Butchart Gardens is still owned by the family - it's overseen by Robin-Lee Clarke, who is the great grand-daughter of Jennie and Robert Butchart. Of course, it feels more like the gardens belong to B.C., and Victoria in particular, since it's such an iconic spot for people from around the world to visit. Locals from Greater Victoria may hold annual passes, which means popping in for a stroll or to see how the plantings have changed with the seasons is a breeze, but for the rest of us, The Butchart Gardens is still a destination. That said, it's a worthy destination that should be on your B.C. must-see bucket list for sure.