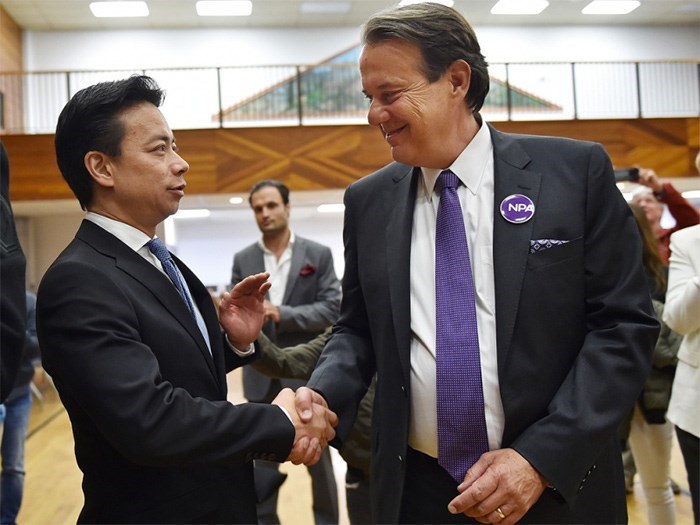 The news was unexpected because the party has typically held a public nomination battle after giving candidates time to campaign, as it has done in previous election years.

“He understands the critical importance or our business and livelihoods and can balance the deep understanding with the environmental and livability concerns we all have.”

Coupar said Monday he made his intentions known that he wanted to be the party’s mayoral candidate.

While nomination battles have occurred in previous campaigns, he said the party appointed candidates such as Suzanne Anton in 2011 and Kirk LaPointe in 2014.

“I think [the board] looked at me and said here’s somebody who’s been making a contribution to the party and has a good background in business and politics, and is the person to lead us forward and try and bring us together in a positive way,” Coupar told Glacier Media.

Elected three times to park board, Coupar’s interest in the mayor’s chair is not new.

He challenged Glen Chernen and Ken Sim in the NPA’s mayoral nomination race in 2018, with Sim defeating Coupar by 375 votes.

Coupar has kept a high profile in the media since 2018 and targeted Stewart in his criticisms related to the city’s growing homelessness and street disorder. Stewart is on record of seeking re-election, as is Sim, who has yet to name the new party he is leading.

Coupar has also been a vocal critic of the Green Party and COPE commissioners for advocating for a temporary separated bike lane in Stanley Park, arguing businesses will suffer and the lane will make the park less accessible to people, including seniors.

“My focus will really be the core services of the city and doing things to make sure taxpayers are getting good value for their dollar,” he said, pointing to supporting “a reasonable budget” for the Vancouver Police Department and putting an end to dumping raw sewage into False Creek.

His first challenge will be to bring the party’s board and its city council caucus together, a relationship that has frayed since Coun. Rebecca Bligh resigned from the party in December 2019 after accusing the board of moving to the far right of the political spectrum.

Four board members resigned in July 2020 and board member Angelo Isidorou left the party in January after a photograph surfaced of him wearing a Make America Great Again baseball cap and flashing a hand gesture associated with “white power” extremists.

NPA president Mawhinney has also been vocal about the need to oust Green Party Coun. Michael Wiebe from council over a conflict-of-interest charge related to the city’s temporary patio program that is now before the courts; the NPA’s four councillors have not taken a position on the Wiebe matter.

The NPA is expected to hold an annual general meeting this year.

“We’ll look forward to an AGM and hopefully we can all come together — I believe that we can,” said Coupar, a former president of courier company Novex Delivery Solutions. “Everybody who participates wants to do what’s best for the city.”

Coupar was among all of the NPA's elected officials who called in January for the party's board to immediately hold an AGM.

Coupar’s appointment comes as rumours were swirling for months that NPA councillors Colleen Hardwick or Sarah Kirby-Yung might be interested in becoming the party’s mayoral candidate.

Glacier Media emailed both councillors and their NPA colleagues, Lisa Dominato and Melissa De Genova Monday for reaction to Coupar’s appointment but had not heard back before this story was posted.