UBC prof Tony Keddie says in his new book that U.S Republicans have cherry-picked from the Gospels of Matthew, Mark, Luke and John to support right-wing agenda issues.
Oct 9, 2020 6:10 AM By: Jeremy Hainsworth 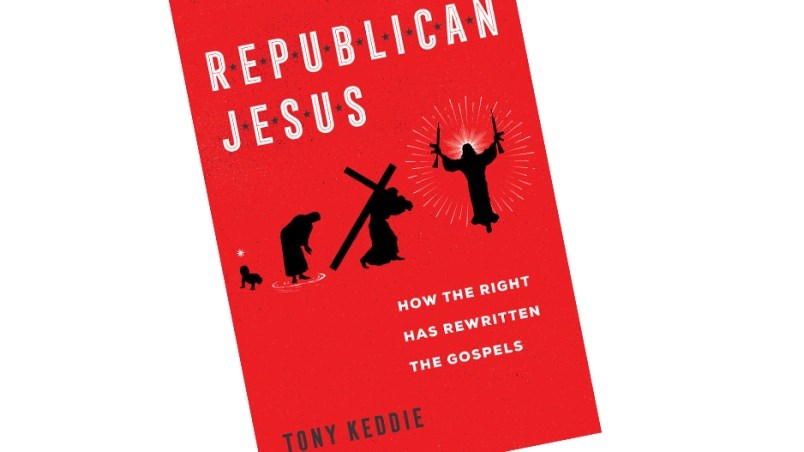 Tony Keddie says in his new book, Republican Jesus: How the Right Has Rewritten the Gospels, that U.S Republicans have cherry-picked from the Gospels of Matthew, Mark, Luke and John to support right-wing agenda issues.

Right-wing political influencers have weaponized the Bible to make Jesus an advocate of gun ownership and opponent of funding for public health care, welfare, and environmental protections, a University of British Columbia (UBC) professor says.

Tony Keddie says in his new book, Republican Jesus: How the Right Has Rewritten the Gospels, that U.S Republicans in particular have cherry-picked from the Gospels of Matthew, Mark, Luke and John to support right-wing agenda issues.

“One that I find particularly perplexing is the claim that Jesus’ disciples being armed when he was arrested means that Jesus would endorse Christians owning semi-automatic rifles,” Keddie said in a university news release. “The equation of a first-century dagger with a modern weapon of mass murder is indefensible.”
Keddie said what is appealing about ‘Republican Jesus is that it “puts a religious mask on the messy business of politics – specifically, how he puts a kind face on the hateful and exclusionary politics of white Christian nationalism.

“Republican Jesus really seems like a nice guy! He cares for the sick and poor, for instance. He just doesn’t think the government should get involved with helping them, because this robs individuals of the chance of loving their neighbours and thereby showing themselves to be true disciples.”

Keddie also takes aim at the assertion that Christ and his followers are Christians and their opponents Jews.

“This simplistic Christian-versus-Jew framework has been the cause of much anti-Semitism throughout history,” Keddie said. “Jesus and his earliest followers were Jews, and we have very little evidence of people self-identifying as Christians prior to the second century. By obscuring these complex dynamics of ancient identities, far-right interpreters have painted deeply problematic portraits of big government as a Jewish conspiracy.”

“We need more voices from the middle to protest the abuses of the Bible by the right-wing Trump alliance,” Keddie said.

This Scottish butcher shop stood in the heart of downtown Vancouver for nearly a century
Oct 2, 2020 2:33 PM
Comments
We welcome your feedback and encourage you to share your thoughts. We ask that you be respectful of others and their points of view, refrain from personal attacks and stay on topic. To learn about our commenting policies and how we moderate, please read our Community Guidelines.