Vancouverites witnessed an intense downpour around 4 p.m. on Monday, Sept. 9 that caused flash flooding in parts of the city.
0
Sep 10, 2019 3:58 PM By: Elana Shepert 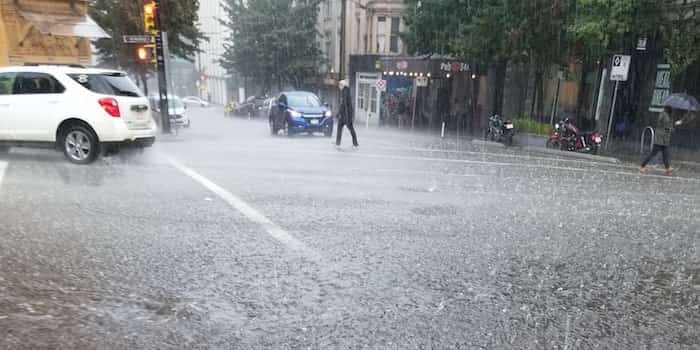 Vancouverites witnessed an intense downpour around 4 p.m. on Monday, Sept. 9 that caused flash flooding in parts of the city.

While Vancouver received heavy rainfall during a short window of time, other parts of the Lower Mainland were sunny and bright.

Vancouver Is Awesome spoke to Matt MacDonald, Meteorologist, Environment Canada about what caused the Vancouver downpour, as well as how this sort of weather event occurs.

MacDonald explained that a thunderstorm-like cell moved across the region from the south to the north between 3:50 p.m. to 4:10 p.m. on Monday afternoon. The radar image below taken from 3:50 p.m. shows where the cell had the greatest amount of rainfall.  As you can see on the “reflectivity scale," the peak instantaneous rainfall rate (dark red) was upwards of 50-70mm/hour. 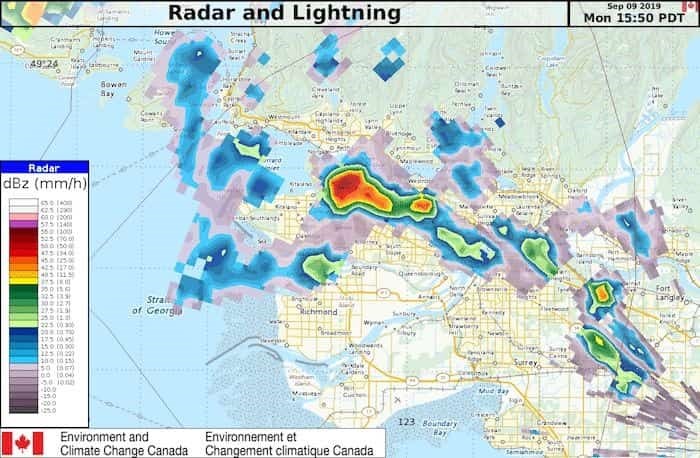 "Our weather station at Vancouver Harbour Centre on Deadman’s Island in Stanley Park recorded 11.2mm in 1 hour. There were weather stations north of Seattle that recorded 1 to 2 inches or 25 to 50mm of rain yesterday afternoon," explains MacDonald.

"These convective cells had high precipitable water and were slow moving which is what produced the heavy downpours. The cloud tops were only about 7-8km so not deep enough to generate lightning. Lightning producing cumulonimbus clouds over the south coast typically have tops in the 10-13km range."

Omg the rain and this guy in the bus lane and the water is so high its coming thru the 95 b line door #Vancouver #Burnaby pic.twitter.com/pGGsjSrmDG

That is some heavy downpour. #Vancouver #rain #Raincouver pic.twitter.com/ruXdB4jfLN

The entire street is a river down here pic.twitter.com/32ElMUdujw

Environment Canada has also stated that Vancouver will see above average temperatures this upcoming winter. However, it also states that it cannot comment on how much precipitation the Lower Mainland will receive. Find out more information about the frosty season here.