Pettersson's pushback on Ryan Hartman shows he has a sneaky nasty side that belies the more gentlemanly aspects of his game.
Aug 5, 2020 11:30 AM By: Daniel Wagner 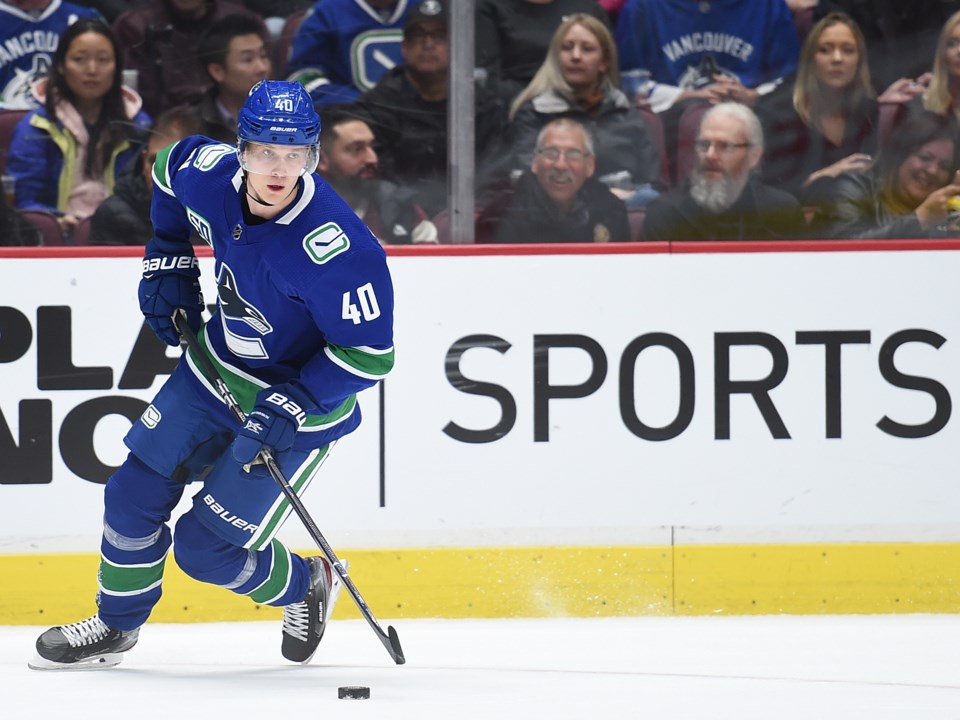 The same question has dogged Elias Pettersson ever since he was drafted by the Canucks in 2017. At the time, he weighed in at a wispy 160 lbs, leading to doubts over whether he was big enough or strong enough to succeed at the NHL level.

His Calder-winning rookie season should have erased those doubts, but even now there are those that question whether Pettersson, now listed at 176 lbs, can adapt to the punishing physicality of the NHL playoffs.

It’s the same challenge faced by every skilled player in the NHL: if the opposition can’t beat you with skill, they’ll literally beat you. With bats and crowbars, if available.

Pettersson has been repeatedly mugged in the Canucks’ qualifying round series against the Minnesota Wild. The game plan for the Wild is clear: get in Pettersson’s face (and back and ribs and hands) with as many hacks, slashes, cross-checks, and elbows as they can get away with.

What might catch people off-guard — at least people that haven’t been watching the Canucks all season — is that Pettersson has battled back and given as good as he gets. Pettersson may still be growing into his 6'2" frame, but he has impressive core strength and a great sense for how he can leverage his body to come out on top in puck battles.

Physically, he doesn’t look the part, but stylistically Pettersson looks a lot like fellow Swede Peter Forsberg, with his predilection for reverse hits and a sneaky nasty side that belies the more gentlemanly aspects of his game. He's a fiery, passionate competitor that won't back down. It’s been a gritty, tough couple of games for Pettersson and he’s risen to the occasion by winning puck battles and controlling the flow of play every time he steps on the ice.

In Game 2 on Tuesday, Pettersson battled through all of the mugging and drew three penalties along the way. He also threw his weight around — all the weight he has available, at least — including a heavy check on Ryan Suter during a Canucks power play.

After his shot was stopped by goaltender Alex Stalock, Pettersson hustled to the end boards, knocking Suter off stride and preventing the veteran defenceman from clearing the puck. That prolonged the possession for the Canucks, leading to another scoring chance for Pettersson.

It was another moment, however, that made it clear that Pettersson won’t be intimidated. Late in the game, Wild agitator Ryan Hartman, who has been trying to get under the Canucks’ skin all series, got in a battle with Pettersson. Hartman’s stick came up, catching Pettersson in the face, and Pettersson didn’t hesitate: he shoved back. Hard.

Whether from the force of the shove or an attempt to draw a penalty, Hartman went down in a heap, with his head awkwardly colliding with the ice. It was an unfortunate result and hopefully Hartman is okay, but it’s becoming increasingly clear: Pettersson won’t be pushed around.

This brand of tough, physical play is something that his linemate, J.T. Miller has emphasized all season.

“We don't want to play like a skilled line,” said Miller earlier this year. “I think when we play well and break other teams down, then the skill takes over and things start to open up. When we're skating and creating turnovers, it's a contagious thing, that's our team's identity.”

Miller is a physical, hard-nosed player, but seeing that same physicality from the soft spoken Pettersson can’t help but inspire his teammates. Pettersson has elite skill, with incredible hands and a deadly shot — seeing him finish his hits on the forecheck, skating hard on the back check, and winning puck battles along the boards shows just how complete a player he truly is.

Canucks fans, of course, are no strangers to seeing their star players get abused on the ice. Brian Burke famously said, “Sedin isn’t Swedish for punch me or headlock me in a scrum,” after the Sedin twins were getting roughed up in a playoff series against the Detroit Red Wings.

The Sedins always had a zen approach: they would take the abuse and the frequent power plays that came with that abuse, creating their own deterrent by being deadly with the man advantage. Teams couldn’t take liberties, they reasoned, if it meant giving up goals by the bushel.

“If you're a top player in this league and you produce points and goals, they're going to come after you,” said Henrik Sedin when asked about Pettersson being targeted by other teams. “The refs are going to call the power plays when they see something. It's up to you to score, that's the only way to get them to back off of you.”

That approach worked well enough in the regular season for the Sedins, but at crucial times in the playoffs, the power plays would dry up, as referees pocketed their whistles out of a desire to “let the players play.”

This has always had the opposite effect: instead of letting the players play, silently sanctioning goonery by refusing to call penalties actually prevents the skilled players from playing a skilled game.

Pettersson seems happy enough to take the power plays when they come, but he’s also shown that he won’t quietly take abuse from his opponents: he’ll bite back. His retaliation against Hartman had some Canucks fans comparing it to Pavel Bure’s “mother of all elbows” on Shane Churla from the 1994 playoffs.

While Pettersson’s shove wasn’t anywhere near as severe or dirty, the message was similar: Pettersson won’t be intimidated. It remains to be seen if Pettersson’s approach will pay more dividends for the Canucks than the Sedins’.

Elias Pettersson’s favourite goal song is you. Yes, you.
Feb 19, 2020 1:06 PM
Comments
We welcome your feedback and encourage you to share your thoughts. We ask that you be respectful of others and their points of view, refrain from personal attacks and stay on topic. To learn about our commenting policies and how we moderate, please read our Community Guidelines.