Can Elias Pettersson carry the Canucks to the playoffs?

With Jacob Markstrom out and Quinn Hughes questionable, the pressure is on Elias Pettersson.

For someone having such a fantastic season, Elias Pettersson has weirdly flown under the radar.

There are several reasons why. Quinn Hughes is the hot new record-setting rookie that has captured the hearts and minds of Canucks fans, leaving past rookie sensations like Pettersson and Brock Boeser in his wake. New arrival J.T. Miller is leading the Canucks in scoring and plays the kind of gritty game that appeals to a wide swathe of fans. And Jacob Markstrom, who won the MVP ahead of Pettersson last season, has been even more valuable this season.

Combine that with a decline in some of Pettersson’s more spectacular goals — the top-corner, one-timer blasts on the power play — and it’s understandable that Pettersson isn’t getting as much hype this season.

But he deserves the hype.

Now, with Jacob Markstrom out for an unknown length of time with a knee injury, and Quinn Hughes possibly being out of the lineup as well, the Canucks need Pettersson more than ever.

Pettersson is currently on-pace for 33 goals and 80 points, a solid sophomore season going purely by points. He’s doing this while facing tougher competition than last season, as teams have keyed in on him all year, looking to shut him down.

Some of that attention takes the form of late hits and crosschecks, but also penalty kills that seem to have one player dedicated solely to preventing Pettersson from getting one-timers. Through it all, Petterrsson just keeps getting points.

Pettersson’s production took a dip in February, but that dip was mild in comparison to some slumps we see in the NHL. He still has 9 points in his last 10 games thanks to a three-point night against the Columbus Blue Jackets.

It’s not just points, however, that define Pettersson’s value to the Canucks. In fact, there’s an argument to be made that Pettersson — not Markstrom, Hughes, or Miller — has been the Canucks’ most valuable player this season.

According to Evolving Hockey’s Goals Above Replacement (GAR) statistic, Pettersson has actually been the third best player in the entire NHL this season, behind only New York Rangers winger Artemi Panarin and Winnipeg Jets goaltender Connor Hellebuyck.

It’s understandable that those two have bested Pettersson. Panarin has 32 goals and 90 points in 65 games, good for fourth in the NHL and 24 points better than the next-best Ranger. Hellebuyck has a .920 save percentage in 55 games — only Carey Price has played more games among goaltenders — and one of the few reasons the shot-bleeding Jets are in contention for the playoffs.

But why is Pettersson the second-best skater in the NHL by this metric? He’s 25th in goals and 22nd in points, he’s 57th in plus/minus for those who care about that sort of thing, and is fourth among forwards on his own team in average ice time.

Firstly, let’s keep in mind that GAR, like many statistics, is imperfect. Josh and Luke Younggren, the twins behind Evolving Hockey, have published multiple articles explaining their methodology for those curious to know. In the conclusion to their GAR/WAR (Wins Above Replacement) model, they’re clear to say that GAR is an estimate with margins for error and added the following:

“WAR is often treated, viewed, and sometimes used as the last-point in analysis – that is, the final number as an end-point. In our view, WAR is actually a much better tool when used as a starting point.”

So, let’s take Pettersson’s GAR and use it as a starting point: what are the components of his GAR and what do they say about his season?

Let’s start with his even-strength offence, which, at 11.8 goals above replacement, leads the Canucks. Brock Boeser follows at 8.9 and J.T. Miller at 8.3.

All that is to say, Pettersson has had a significant offensive impact at even-strength, whether or not he’s picking up points on every goal.

Next is even-strength defence, where Pettersson’s 2.7 GAR also leads the Canucks, just ahead of Alex Edler at 2.4. Pettersson’s defensive impact is significant, as illustrated by this heatmap of shot attempts against the Canucks with and without Pettersson. 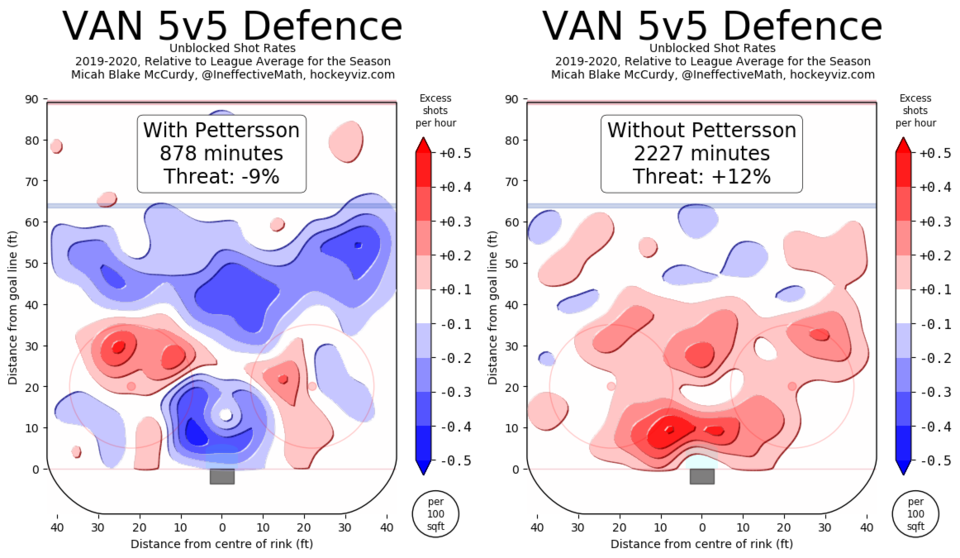 Canucks defensive heatmap for shots with and without Elias Pettersson via HockeyViz.com.

Pettersson has occasionally been sheltered defensively this season, with Brandon Sutter sometimes put on the ice in his place for defensive zone faceoffs, but there’s an argument to be made that sheltering him is really unnecessary. Pettersson has the sound positioning and quick stick to break up plays defensively and turn the puck up ice.

Next up is power play offence, which is one of the few areas where Pettersson doesn’t actually lead the Canucks. He’s just behind Adam Gaudette, who has been very impactful in more limited minutes on the second power play unit.

Pettersson, however, leads the Canucks in power play points, tied with Quinn Hughes. When it comes to primary points — goals and first assists — Pettersson has the advantage over Hughes, with 18 primary points to 15 for Hughes.

With no impact on shorthanded defence — Pettersson doesn’t play on the penalty kill — we can jump to penalties taken and drawn, which is where Pettersson pulls away from the pack.

Compared to the rest of the NHL, Pettersson doesn’t take a lot of penalties given the minutes he plays, but he does draw a ton of penalties. Pettersson has drawn 28 penalties this season, good for 10th in the NHL, but has only taken 8. That gives him a penalty differential of +20, which is tied with Jack Eichel for the NHL lead.

That’s how Pettersson has an impact that goes beyond point totals. He influences the game in every facet he can, from creating scoring chances to preventing chances against, from creating goals on the power play to drawing the penalties to get those power plays in the first place. I’m sure that if he played on the penalty kill, he would have a positive impact there as well.

The question for Pettersson and the Canucks is whether their sophomore Swede is up to the task of carrying the team on his shoulders while other key players are injured. Beyond Markstrom and possibly Hughes, Brock Boeser has been out for a month with no guarantee he’ll be able to return before the end of the season. Whether the Canucks make the playoffs or not will likely depend on Pettersson.