How many records was Quinn Hughes going to break this season? 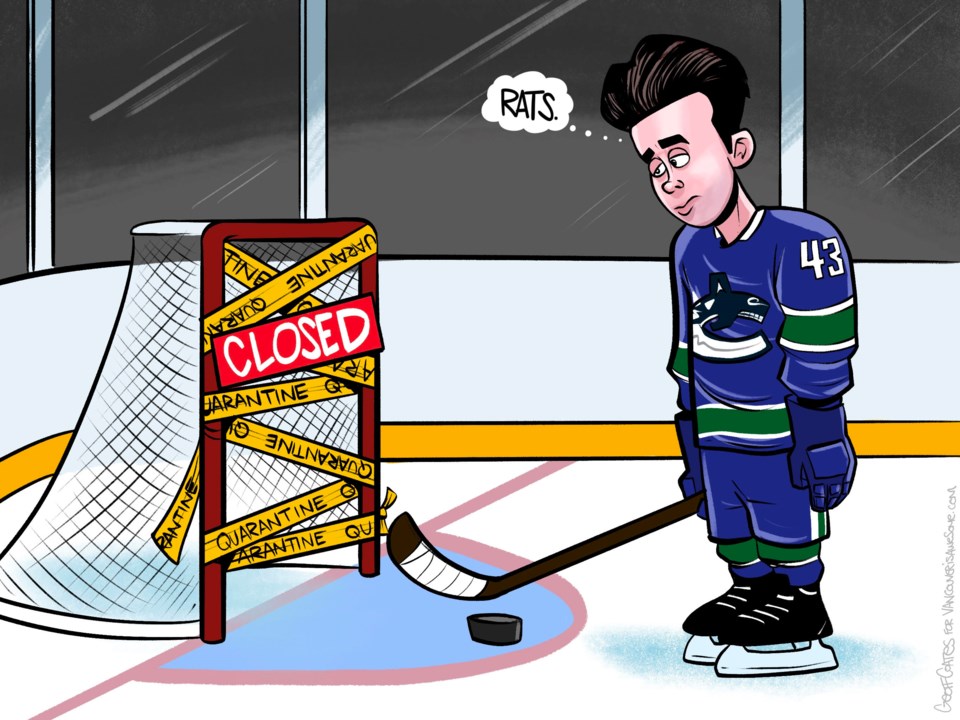 Quinn Hughes was well on his way to racking up records before the season was abruptly halted. illustration: Geoff Coates / Vancouver is Awesome

One month ago, the hockey world was abuzz as Quinn Hughes hit 50 points, and for good reason. It was the first time in 27 years a rookie defenceman had reached 50 points.

The last defenceman to reach that milestone was Vladimir Malakhov, a tenth-round pick of the New York Islanders that tallied 52 points in just 64 games in his rookie season back in 1992-93. Malakhov had a roller coaster career, occasionally derailed by injuries and controversy, but was still a special talent.

Hughes quickly passed Malakhov, moving into 14th on the all-time scoring list for rookie defencemen with 53 points. Unfortunately, that’s as far as he progressed before the COVID-19 pandemic led to the suspension of the NHL season.

What’s particularly frustrating is that Hughes had been on a roll since the All-Star Break, leading all NHL defencemen — not just rookies — in scoring with 19 points in his last 20 games. Now, the season is up in the air. If the Vancouver Canucks complete the regular season at all, it’s unlikely to be the full slate of games, and there’s a solid chance that the end of the 2019-20 season never gets played.

That’s one of the biggest unanswered questions of the suspended season for the Canucks: just how far could Hughes have gone in his rookie season? What could he have done in the Canucks’ final 13 games?

1 | Most points by a Canucks rookie defenceman: 56

One big record Hughes was surely going to break is the longest-standing record in Canucks history: most points by a rookie defenceman. Dale Tallon, the Canucks’ first draft pick, set the record in the Canucks’ inaugural season with 56 points.

Some might suggest it’s a testament to the Canucks’ lack of success drafting defencemen in the decades since that the record still stands, but to be fair, Tallon’s 56 points is one of the best seasons ever by a rookie defenceman. It’s good for 12th all time, ahead of some all-time greats like Denis Potvin, Al MacInnis, and Bobby Orr.

Still, it’s surprising Tallon’s record has lasted so long, especially when you consider it was nearly broken the following year by Jocelyn Guevremont, who managed 51 points in 75 games.

There’s no way Hughes was going to go 13 games to end the season without recording at least four points, but Tallon’s name will remain in the Canucks’ record books.

2 | Most points by a rookie NHL defenceman in the modern era: 60

The eras of the NHL are fairly loosely defined. According to the NHL’s Official Guide & Record Book, the “modern era” of the NHL started with the 1943-44 season with the adoption of the centre red line, which allowed for more forward passing.

Others define the “modern era” as beginning with the 1967 expansion beyond the Original Six, doublinig the total number of teams to 12.

Wikipedia calls the era from 1942-1967 the “Original Six era,” and calls the period from 1967-1992 the “expansion era, which leaves 1992 to the present as the “modern era.” The era began with the first NHL strike on April 1, 1992, along with expansion into the Southern United States, first to Tampa Bay, then to Anaheim, Florida, and Dallas.

If you’re strict with the definitions, Quinn Hughes is already the highest-scoring defenceman in this interpretation of the “modern era,” but since this definition is already a little loose, let’s expand it to include Nicklas Lidstrom, who scored 60 points in the 1991-92 season as a fresh-faced rookie for the Detroit Red Wings.

Hughes needed just 7 points in his final 13 games to match Lidstrom, 8 points to pass him. That was well within his reach. Even in his lowest-scoring stretches of the season he managed that many points.

Passing Lidstrom would put Hughes into seventh all time among rookie NHL defencemen, with a who’s who of great defencemen the only ones ahead of him on the list: Larry Murphy, Brian Leetch, Gary Suter, Phil Housley, Ray Bourque, and Chris Chelios.

Hughes wasn’t just on his way to rookie records: he was set to rewrite the Canucks’ record books in general.

While the Canucks haven’t had a plethora of great defencemen, they’ve still had some fantastic seasons. Jyrki Lumme had a couple seasons with 50+ points in the 90’s, Paul Reinhart had back-to-back 57-point seasons before injuries forced his retirement, and Dennis Kearns and Rick Lanz were great for the Canucks in the 70’s and 80’s, respectively, including a 60 point season for Kearns in 1976-77.

Those seasons might not hold a candle to some of the mind-blowing numbers put up by the likes of Bobby Orr, Paul Coffey, and the others that were racking up 90+ point seasons in the 70’s and 80’s, or even into the 90’s for Coffey, MacInnis, and Bourque, but we have to grade on a curve here.

It’s telling, however, that Hughes was threatening to break the franchise record for most points by a Canucks defenceman in his rookie year.

That record belongs to Doug Lidster, though not for long if Hughes’ rookie season is any indication. Lidster put up 63 points in 80 games in the 1986-87 season, good for seventh among NHL defencemen that season. While he was a solid defencemen for the Canucks for nearly a decade, the 1986-87 season was an anomaly for Lidster, who had just 38 points in his next best season.

Hughes was on-pace for 63 points when the season was suspended, but was scoring at a higher pace as the season progressed: passing Lidster was a solid possibility this season; passing him sometime in the near future seems almost certain.

When Elias Pettersson passed Pavel Bure and Ivan Hlinka for the Canucks rookie record for most points, it was a momentous occasion. The record had stood for nearly three decades, after all, and surely Pettersson’s new record would last for a little while.

Like Tallon’s record was nearly broken a year later, the same was nearly true for Pettersson.

It would be even more impressive for Hughes to break the rookie record as a defenceman compare to Pettersson as a centre, but Hughes was on his way.

In his final 13 games before the season was suspended, Hughes had 13 points. If he had kept that pace going for his next 13 games, he would have tied Petterrsson with 66 points. It’s not hard to imagine him getting one more and passing Pettersson.

Sure, Hughes had the benefit of getting to play with Pettersson, while Pettersson didn’t get to play with Hughes in his rookie season, but it still would have been amazing to see that rookie record get toppled so quickly.

5 | Most assists by a Canucks defenceman: 55

Hughes did manage to break at least one record, however, before the season was stopped: he’s the all-time leader in assists by a Canucks rookie defenceman. His 45 assists are ninth all-time among NHL rookie defencemen, just ahead of Tallon’s 42 assists. That, at least, can’t be taken away from him.

Hughes was 10 assists away with 13 games to go. All 13 of his points in his last 13 games were assists, so tallying ten more was well within his reach. 11, to break the record, was right there for the taking.

6 | Most assists by an NHL rookie defenceman: 60

Is this pushing it? Hughes would need 15 assists in his final 13 games to match the record for most assists by a rookie defencemen in the NHL. That’s not outrageous.

That record is held by Larry Murphy, who also holds the record for most points by a rookie defenceman with 76. That total, at least, was out of the reach of Hughes, even if it seemed attainable earlier in the season. Hughes wasn’t (or isn’t) going to score 23+ points in 13 games.

Even if Hughes didn’t get that far, if he matched Kearns’ 55 assists, that would have tied him with Chris Chelios for second all-time among rookie defencemen. That would have been a special accomplishment, but it seems likely we’ll never see it happen.

7 | Most power play points by a Canucks defenceman: 39

Another Canucks rookie record held by Hughes despite the suspended season: most power play points by a rookie defenceman. That one’s not particularly close, as Hughes has 25 power play points, eight more than Tallon and Kearns managed in their rookie seasons.

This particular record comes with a caveat, as the NHL didn’t keep track of ice time over the course of a season until the late 90’s. We have no way of knowing how many minutes Tallon, Kearns, or Guevremont played.

Still, over the last 22 years, only three Canucks have played more minutes than Hughes in their rookie seasons — Mattias Ohlund, Alex Edler, and Ben Hutton — and only Ohlund has averaged more minutes per game.

Could Hughes have topped Ohlund for total time on ice? Let’s take a look.

Could Hughes make up that ground over the final 13 games of the season?

That’s a difference of 244:23 in total ice time, which would be an average of 18:48 per game over the course of 13 games. Hughes played less than 18:48 in just eight games all season, and one of those was because he got injured in the first period.

So, that’s one more record that Hughes surely would have broken before the season was suspended. He did, however, pass Ohlund for the most time on ice on the power play by a Canucks rookie.

When some rookies hit a wall, Quinn Hughes just keeps getting better
Feb 21, 2020 4:33 PM
Comments
We welcome your feedback and encourage you to share your thoughts. We ask that you be respectful of others and their points of view, refrain from personal attacks and stay on topic. To learn about our commenting policies and how we moderate, please read our Community Guidelines.