"I don't know if anyone has been better than me."

Quinn Hughes is already the 15th highest scoring rookie defenceman in NHL history. The 20-year-old rearguard has 51 points in 64 games, just one point behind Vladimir Malakhov, who was 24 in his rookie season.

Odds are good that Hughes will break the Canucks’ franchise record for rookie defencemen — he’s just five points behind Dale Tallon’s 56 — which would also move him into the top-10 in NHL history. From there, it’s just a matter of how many players he can pass. Nicklas Lidstrom is in reach at 60 points, and Chris Chelios, Ray Bourque, and Phil Housley are all within reach at 64, 65, and 66, respectively.

Consider as well: most of the players ahead of him on the all-time list had their rookie seasons in the high-scoring late 70’s, 80’s, and early 90’s. Larry Murphy holds the all-time record for most points from a rookie defenceman with 76, but his rookie season came in 1980-81, when teams were averaging 3.84 goals per game.

Murphy’s Los Angeles Kings actually averaged 4.21 goals per game that season, led by the legendary Marcel Dionne. Murphy is, of course, an all-time great and a worthy member of the Hockey Hall of Fame — he was just 19 in his rookie season — but there’s no denying that goals were easier to come by at that time than now, when teams average 3.03 goals per game.

With all that in mind, it’s pretty easy to see why Hughes has gone from distant second to neck-and-neck with Cale Makar for the Calder Trophy.

Makar, for his part, is also on-pace for an all-time great season. If he continues on his current scoring pace, he’ll finish the season with 62 points — just behind Hughes, but still good enough to finish in the top-10 among rookie defencemen all time.

With little distinguishing Hughes and Makar in total points, the Calder Trophy vote will come down to other factors. Will the voters prize Makar’s higher goal totals and slightly better points per game? Or will they credit Hughes for his higher ice time and stronger defensive game?

As for Hughes himself, he’s feeling good about his chances. He suggested he’s made a strong case for the Calder in a recent article from The Hockey News.

“Yeah, for sure I think so,” Hughes said. “I’m not the one making the call, but especially the last 30 games, I don’t know if anyone has been better than me.”

In any case, it’ll be hard for the Calder voters to give the award to a forward over two of the greatest seasons ever by a rookie defenceman, particularly if Hughes and Makar finish ahead of Kubalik in the scoring race, as they’re likely to do.

What might help the case for Hughes is if the Canucks start using him like the player that he is: very clearly the best defenceman on the team. As it is now, Hughes’ ice time drops precipitously when the Canucks have a lead, which might play a role in how they have struggled at times to hold those leads.

This visualization from HockeyViz illustrates it best: when down or tied, Hughes is among the Canucks’ team leaders in ice time; up by one, his ice time drops to fourth among Canucks defencemen. 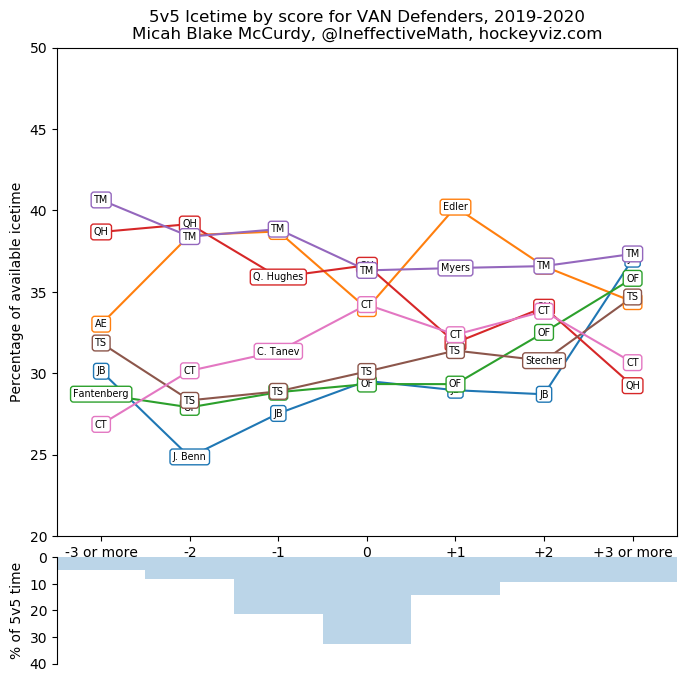 Arguably, Hughes should be even higher in ice time when the Canucks are down by one — Tyler Myers and Alex Edler are well above him — but it’s the drop when up by one that looks most concerning. It’s tantamount to taking the foot off the gas, with Alex Edler’s ice time spiking in concert with the drop for Hughes.

That, at least, is completely understandable. Tanev has stayed healthy all season — knock on wood — and needs to snag some rest when he can. Why not limit the defensive defenceman’s ice time when down by a bunch? Likewise, Hughes is in his rookie season, coming off a less-laborious NCAA season: as much as his seemingly-effortless play on the ice keeps him fresh, getting him some rest in games where they have an insurmountable lead makes sense.

When that lead is significantly more surmountable, however, the Canucks should lean a little more on the rookie prodigy.

Hughes is tremendously confident in himself and likely wouldn’t hesitate to say that he can play in any situation and make the team better.

“I haven’t surprised myself because I thought I would do really well,” said Hughes at the end of the Hockey News article. “I’ve been doing this my whole life so why would I be surprised? At the same time, you think you’re going to do well, but you never know how things are going to go. So I’m humbled by that.”

I’m not so sure “humbled” is the right word, but the Canucks need his cocksure confidence more than ever.

Quinn Hughes for Calder and Jacob Markstrom for Vezina might be aiming too low
Feb 13, 2020 1:34 PM
Comments