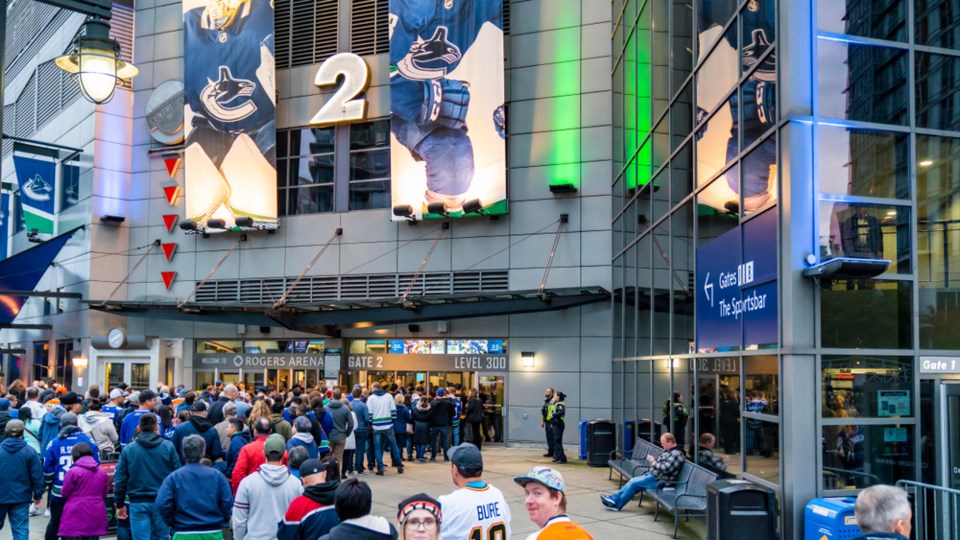 Canucks fans stream into Rogers Arena, which might not happen again for a long time. photo: Daniel Avram / Shutterstock

There’s a centuries-old saying that seems particularly pertinent at this point in history: “Hope for the best and prepare for the worst.”

The quickly-escalating COVID-19 pandemic has entire countries on lockdown in an attempt to halt the spread of the coronavirus. In North America, various states and provinces have enacted bans on large gatherings and closed down bars, restaurants and, crucially for hockey, arenas.

On Monday, Canadian Prime Minister Justin Trudeau announced measures to close the borders for international travel, excepting Canadian citizens and permanent residents, though that ban does not currently apply to US citizens.

For the NHL, the situation changed rapidly, from speculating about playing games in empty arenas to temporarily suspending the season. Now it’s an open question whether the remainder of the 2019-20 season and playoffs will happen at all. If that occurs, it will be just the third year in its history that the Stanley Cup has not been awarded.

As governments make preparations to prevent the worst possible outcomes, the NHL is still hoping for the best. On Monday, they announced an update to their plans for dealing with the COVID-19 pandemic.

Notably, those plans include allowing players to return home, as players were previously staying in the home cities of their respective teams, with instructions for players to self-quarantine through March 27th.

The biggest news, however, is that the NHL is opening up the possibility of restarting the season in 60 days.

“Our objective will be that, in addition to continuing regular updates, we will be able to provide high-level guidance on the potential of opening a training camp period roughly 45 days into the 60-day period covered by the CDC's directive,” reads the statement from the NHL.

The Centers for Disease Control and Prevention (CDC) has recommended that events or gatherings that consist of 50 or more people be cancelled or postponed for the next 8 weeks.

Take two 20-man lineups, four on-ice officials, and six coaches and assistant coaches, and an NHL game automatically consists of 50 people, and that’s before considering medical staff, off-ice officials, and many others that need to be on hand for a game to take place. In other words, if the NHL follows CDC recommendations, games can’t take place for at least 8 weeks, even without fans in attendance.

The NHL’s prospective plan shows that they don’t want to waste any time getting the season going again if the moratorium on mass gatherings ends in 60 days, hoping to open training camps in 45 days. That would mean early May, with a potential mid-May date to re-open the NHL season.

One imagines that a positive coronavirus test among the returning NHL players would quickly put a damper on these plans.

What would the remainder of the 2019-20 season look like if it does return in 60 days? There are various scenarios, with the NHL reportedly entertaining some particularly far-out ideas, such as allowing 24 teams into the playoffs, with an initial “playout” round for the bottom-seeded teams. Darren Dreger reports that “one team...considers this a strong option,” perhaps a 23rd or 24th-ranked team.

There is, of course, a distinct possibility that the bans on mass gatherings and closed borders remain in place for longer than 60 days. While hoping for the best, the NHL needs to prepare for the worst: the cancellation of the season.

WestJet passenger tests positive for COVID-19 on B.C. flight
Mar 16, 2020 10:37 AM
Comments
We welcome your feedback and encourage you to share your thoughts. We ask that you be respectful of others and their points of view, refrain from personal attacks and stay on topic. To learn about our commenting policies and how we moderate, please read our Community Guidelines.