PACIFIC POOL PARTY: Does anyone from the Pacific Division belong in the Norris conversation?

In his rookie season, Quinn Hughes has been the best defenceman in the division, but is that enough to get Norris votes?
0
Mar 24, 2020 9:39 AM By: Ryan Lambert 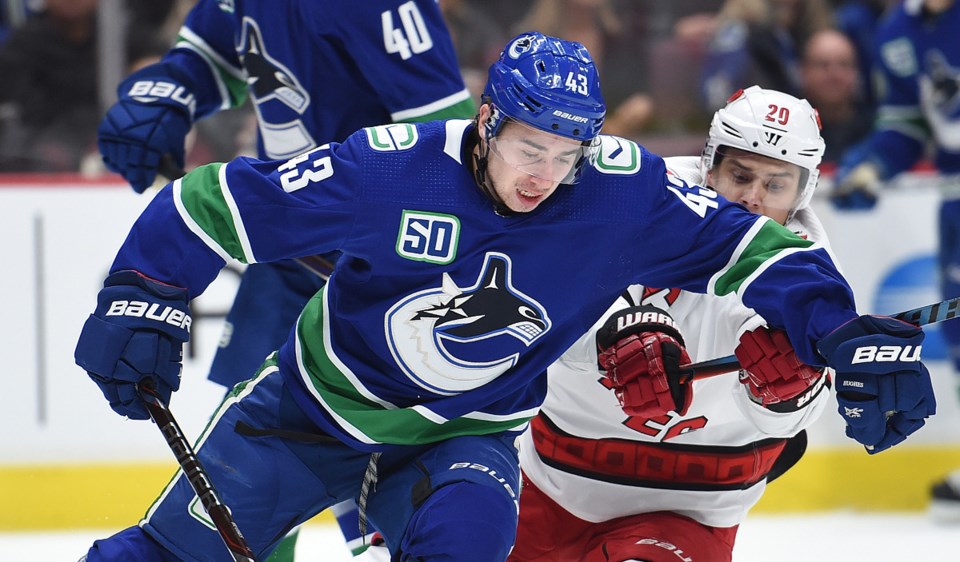 Quinn Hughes protects the puck as he moves up ice. photo: Dan Toulgoet

One award where the Pacific Division isn’t getting a ton of love this season is the Norris Trophy, awarded annually to the league’s top defenseman.

On the surface, it’s easy to see why. The Washington Capitals’ John Carlson was on pace for the kind of point total not seen from defensemen since the ‘90s; if he played the full 82 games, his points pace would have put him at almost 90, an inconceivable number that would have no doubt earned him a ton of consideration for the Norris.

Meanwhile, the Nashville Predators’ Roman Josi scored at a 79ish-point pace (also very good!) and unlike Carlson was actually competent defensively, and seems to be an increasingly popular choice among hockey writers.

So, those are the two very clear frontrunners, and the Tampa Bay Lightnings’ Victor Hedman is probably third in most reasonable ballots. That’s three of the league’s four divisions accounted for, but is there anyone from the Pacific who should get the same level of consideration?

The short answer is, “Probably not.” There are a few guys who have legitimate claims at being the best defender in the division, but not necessarily good enough cases to work their way into the top five in the league.

The clubhouse leader for the Pacific is, as you might have guessed, Quinn Hughes. He had a phenomenal rookie season (more on that next week) on a team that was in the playoff picture for the entire season, played more minutes than anyone on the team, and so on. Not bad for a 20 year old.

The knock on him, however, is also pretty clear, and it’s the kind of thing that would get anyone bounced out of consideration from voters: He had a minimal defensive impact at 5-on-5 and didn’t kill penalties at all. Fair or not, these are the things that get counted against you, and in a season where a few defensemen put up huge offensive numbers, “only” having 53 in 68 as a rookie probably isn’t enough on its own to vault Hughes into that conversation.

There are, perhaps, a few other guys worth mentioning here. The Edmonton Oilers’ Oscar Klefbom would probably have a little more involvement in the conversation, but he only scored five goals and also missed several games due to injury. Combine that with the fact that he plays a lot of power play minutes behind McDavid and Draisaitl and it’s hard to see his 34 points in 62 games as anything but underwhelming, even if that’s where most of his value comes from.

Jacob Chychrun had a really good fourth season for the Arizona Coyotes, and, while he scored 12 goals (a lot!), he also had just 14 assists despite a big chunk of 5-on-4 time. He had a strong defensive impact overall (under 2.5 goals against per 60 minutes in all situations), but you have to think a lot of that was due to Arizona’s high save percentage for much of the season.

Given the strength of their blue line overall, you have to mention the Calgary Flames, even as you they obviously didn’t have a real Norris contender for the first time in a while. Mark Giordano is finally showing his age somewhat (he was only “very good” instead of being a legit Norris candidate), but TJ Brodie and Rasmus Andersson both stepped up and had strong seasons. Even as the team itself was a bit of a disappointment, having three of the 10 or so best defensemen in the division is always a positive.

The only other guy I would really highlight as being in the conversation for best defender in the division is Shea Theodore from the Vegas Golden Knights. He gets the benefit of playing behind some really good forwards but, unlike Chychrun, he was significantly hampered by the fact that Marc-Andre Fleury and Co. couldn’t make a save all year. With league-average goaltending, it’s easy to see a scenario where Theodore is at least a top-five kind of guy, even if he’s not all the way there, but that’s life.

And hey, speaking of Theodore, remember when the Anaheim Ducks had that really strong crop of young defenders? What ever happened to them? A lot of the problem was in the attacking end, but even Hampus Lindholm wasn’t good enough defensively to make up the difference. For an entire blue line, it was mostly a year better left forgotten.

It’s worth noting, too, that here’s another rookie defender in the division, aside from Hughes, who had a similarly strong first full season in the league: Matt Roy of the Los Angeles Kings. Of course, he spent most of the season as a 24-year-old and he played a few dozen games last season, but he just barely qualifies as a rookie nonetheless.

While Roy didn’t produce offensively (4-14-18, respectable) or play huge minutes (a shade over 18 a night), he actually had a strong impact at both ends of the ice, even as he didn’t get much special teams play.

Evolving Hockey actually lists Roy’s WAR (Wins Above Replacement) contribution as being slightly better than Hughes’s, and that was with a season spent playing mostly with Ben Hutton and Joakim Ryan. That said, he also spent a lot of time behind Anze Kopitar, so that obviously helps, and Roy isn’t close to being a legit Norris nominee, but it seems like LA might have itself a very strong middle-pair guy for the future, at the very least.

There are just too many holes in cases for the various “best defensemen on the team” in the Pacific Division, so you really can’t make a legitimate case for any of them as a Norris candidate. There’s always next year, though, and if we’re talking about Quinn Hughes, likely 10 or so after that as well.

When some rookies hit a wall, Quinn Hughes just keeps getting better
Feb 21, 2020 4:33 PM
Comments
We welcome your feedback and encourage you to share your thoughts on this story. We ask that you be respectful of others and their points of view, refrain from personal attacks and stay on topic. To learn about our commenting policies and how we moderate, please read our Community Guidelines.