PACIFIC POOL PARTY: Elias Pettersson should be among the Pacific’s MVP nominees 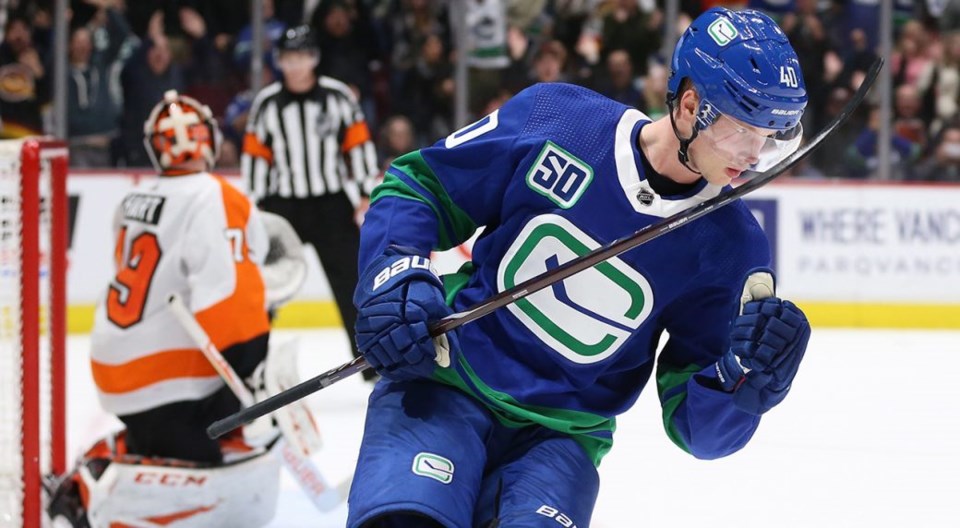 Well, things got weird in a hurry. The coronavirus “pause” of the 2019-20 season throws everything into chaos.

That being said, let’s just get into it because things are going to be weird for a while.

The presumptive frontrunner for the league’s MVP award is in the Pacific Division. His name is Leon Draisaitl and he leads the league in points by a wide, wide margin. Second in points is Connor McDavid, his former linemate and the guy who is widely regarded as the best player in the world. And he’s 13 points back (in large part because he missed seven games).

Together, Draisaitl and McDavid have led the Oilers to second in the Pacific and an 82-game points pace of about 96, despite the fact that, until Kailer Yamamoto came aboard midway through the season, the team basically had three NHL-quality wingers and one of them was James Neal.

So the MVP case for either one of them is pretty clear, from the perspective of both pure production and the help they had around them.

However, we can also say they might split the vote to some extent, in a Daniel-and-Henrik-Sedin sort of way, because when you play about half your total minutes with another MVP candidate who’s credibly a top-five offensive talent on earth, it’s sort of tough to separate that out. Draisaitl, for instance, might have 110 points in 71 games, but since McDavid had points on 54 of them, well…

We also don’t necessarily have to get into their defensive issues because I suspect people aren’t going to care much about that in light of the gaudy numbers. However, the fact that both elite Oilers’ production is almost entirely canceled out by the goals they concede at the other end must be taken into consideration and, frankly, held against them.

So that poses a simple question: was anyone else in the Pacific worthy of being mentioned with those two guys this season?

The answer is yes, but there aren’t a ton of candidates. In a season when most of the Pacific’s teams were mediocre at best, that’s to be expected, but there are four guys worth highlighting in all this: Arizona’s Darcy Kuemper, Vegas’s Max Pacioretty and Mark Stone, and Vancouver’s Elias Pettersson and Jacob Markstrom.

Starting with Kuemper, we can certainly say that his success early in the season is the reason the Arizona Coyotes were even in the playoff conversation. When you’re in the .930 neighborhood in save percentage behind a team no one thought would be any good at all, you merit discussion.

For a while, the Coyotes were the surprise darlings of the Pacific, but he got hurt on December 19th, came back, played four games (in which he was .924 but saw the team go 1-3-0), and that was about it. The big knock on his candidacy is that he only made 29 appearances because of a two-plus-month injury absence, and that’s just about where we have to leave it with him.

It was a really nice run out of Kuemper for the third year in a row, but as a goalie, you’ve gotta play a big chunk of your team’s games and he didn’t even do that in an abbreviated season.

Markstrom’s case is likewise self-evident, and, even as he played more games than Kuemper, you can’t say he really put in a full season of work, also due to injury (and to a lesser extent, Thatcher Demko’s hot start).

The other problem for Markstrom is obviously that his save percentage of .918 is good, but among goalies it’s not elite. Connor Hellebuyck in Winnipeg would likely have the Goalie MVP Candidate slot all wrapped up (and deservedly so) because of his huge workload and the fact that the team in front of him has been awful basically from the start of the season. Not so with Markstrom, who probably doesn’t really warrant legitimate consideration as a result.

As for the skaters, Pacioretty and Stone are the two possible considerations for MVP not because they posted big numbers (both have flirted with a point-a-game campaign but neither ended up there) but because they play the full 200 feet to an absurd extent. No one is going to have the offensive output, especially on the power play, that Draisaitl and McDavid do, but Pacioretty and Stone came close to matching their 5-on-5 offensive quality and were dominant defensively as well.

Let’s put it this way: when Draisaitl and McDavid were on the ice at 5-on-5, the Oilers were plus-0.4 and plus-0.3 per 60 minutes, respectively. And, again, this is with some ungodly goals-for numbers (70 Edmonton goals in Draisaitl’s 1,100ish minutes!).

Pacioretty and Stone were both in the plus-0.9 neighborhood with significantly better underlying numbers across the board, and despite the fact that for a large portion of the season, there wasn’t a goalie on the Vegas roster that could make a save.

With that said, if you think two guys who didn’t even clear 70 points are going to sniff legitimate MVP consideration, I have some hockey tickets for next month to sell you. Primo seats!

The only other guy in the Pacific who deserves legitimate consideration here is Pettersson, who is a lot like Stone and Pacioretty in that he drives the offense but also helps keep things under control defensively. Unfortunately, also like his two counterparts in Vegas, he didn’t exactly set the world on fire, scoring-wise (“only” 27-39-66 in 68 games), which is obviously going to count against him.

But, if we’re talking about teams’ early-season expectations, Vancouver falls into that Arizona category where few would have projected them in a playoff spot and, unlike the Coyotes, that’s where the Canucks ended up.

Pettersson is their most important player by far and his impact is seen all over the ice, except on the penalty kill, obviously. That shouldn’t count against him because it doesn’t count against McDavid and Draisaitl, but he’s good enough at preventing goals at 5-on-5 that you can’t call him anything resembling a liability.

Evolving Hockey currently has Pettersson at second in the entire league in skater WAR (Wins Above Replacement) because of how well-rounded his game is, and Pacioretty is a fair distance back at 13th to be the next-closest guy in the Pacific Division on that list.
There’s certainly a very legitimate case for Pettersson, but one suspects that the lack of insane production in a season in which five guys have already cleared 90 points disqualifies him (arguably unfairly).

In the end, one suspects that if there is an MVP winner out of the Pacific it will be the guy who was on pace to finish the year with almost 130 points. I wouldn’t really agree with it, but you can see where voters are coming from.

PACIFIC POOL PARTY: What does the Canucks’ decline mean for Jacob Markstrom's contract negotiations?
Mar 10, 2020 10:11 AM