“Some of the best players in the NHL — think Hart trophy and Conn Smythe-caliber players — have been kicking around some ideas in some group chats."
Mar 17, 2020 6:12 PM By: Daniel Wagner 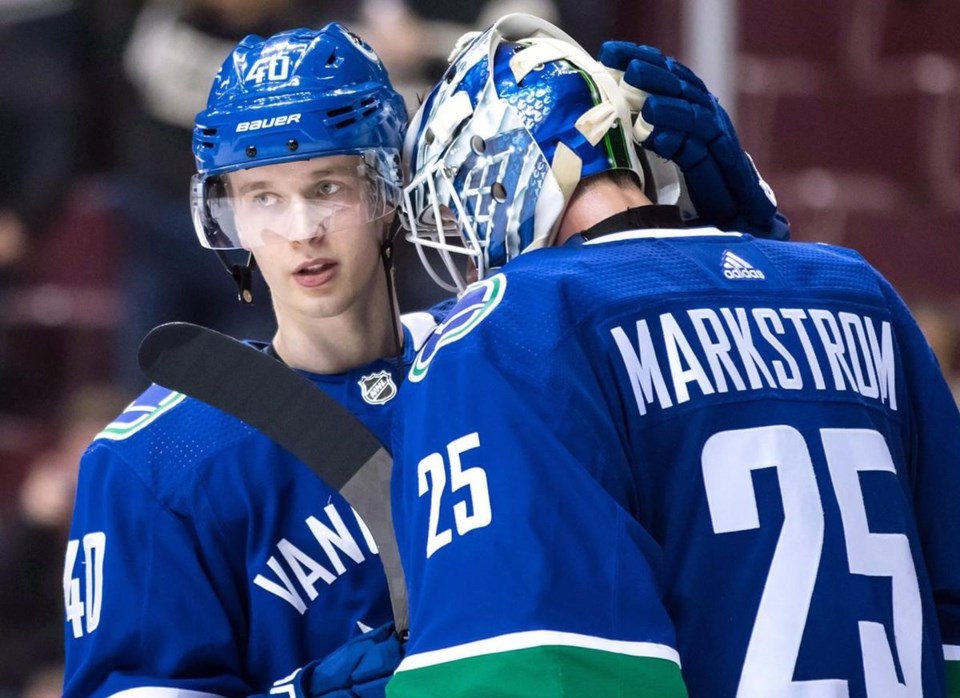 In these uncertain times, everyone seems to be casting about for some certainty. We want to be certain that we will have toilet paper in the house when we need it, that we’ll still be able to pay the rent if we’re laid off from our jobs, and that the person waiting in line with you at the grocery store didn’t just return from a vacation in Italy.

Some of the certainty people are seeking, however, is a little less serious.

Canucks fans, for instance, would love to know for certain when the NHL season will start again or if it will at all. There’s a lot at stake for the Canucks — a berth in the playoffs, the fate of their first-round pick from the J.T. Miller trade, Quinn Hughes’ pursuit of Canucks records and the Calder Trophy. Sure, those are pretty low stakes compared to the rest of the world, but it’s nice to be highly-invested in such low stakes action when all the high stakes stuff is so depressing.

Should they prepare as if the NHL season will start up again in May, as the NHL has tentatively planned, even if that is an unlikely scenario? Should they assume the season is over and move into offseason mode?

As the NHL tries to figure out the best path forward, the players have come up with their own plan that aims to avoid the uncertainty of having to constantly move goalposts as the situation worsens. Instead of preparing to re-start the season in May, then moving it to early June, then to late June, etc., they’re proposing a jump straight to the summer months, according to a report by TSN’s Frank Seravelli on Insider Trading.

“Some of the best players in the NHL — think Hart trophy and Conn Smythe-caliber players — have been kicking around some ideas in some group chats,” said Seravelli on Tuesday. “They’re following along with the health experts knowing that this may take until July or August for the coronavirus to really have enough people recover and build up immunity.

“So they’re saying, in these uncertain times, how could we find a way to potentially create some certainty here for the players. One way to do that, the idea that they’ve proposed, is to open training camps at some point in July, then play regular season games — potentially enough games to formulate the playoffs and have enough teams play the same number of games.”

The mention of the caliber of players involved is mildly amusing. If these were fourth-line grinders or depth defencemen coming up with this plan, perhaps it wouldn't be as good. It seems they haven't been invited to the group chat.

The wait until July would be a larger gap of time than the current recommendation from the Centers for Disease Control and Prevention (CDC), which has so far just recommended cancelling or postponing gatherings of 50 or more people. The players’ plan would skip straight over May and June to provide some certainty: a late July re-start date for the regular season.

It would also mean playing fewer than 82 regular season games, instead playing just enough games so that every team finishes with the same number of games. Or, maybe not “just enough”: there would also need to be enough warm-up games for playoff teams that already had a higher number of games played, so that they’re not going into the playoffs completely cold.

“Then, start those playoffs in early August, have the Stanley Cup awarded by late September, and then begin a three-to-four week transition period in which you conduct the draft and free agency in October,” continued Seravelli, “followed by the start of a full 82-game regular season, that would of course be on a condensed schedule, starting then in November.”

The natural consequence of pushing the season back into the summer is that next season would have a later start date, resulting in a condensed schedule that would challenge both the schedule makers and the players.

The shorter “offseason” would also mean cramming a lot into the month of October: the draft, free agency, cuts and waivers to send players to the AHL, along with a whirlwind schedule behind-the-scenes to get everything ready for an all-new season.

That said, it seems like a feasible plan with some significant upsides. It would be a long time to wait for the NHL to return, but at least fans would know it’s coming back.

This plan hasn’t been officially presented to the NHL yet — the players will first take it to the NHLPA — but some version of it has been shared with NHL Commissioner Gary Bettman via an NHL governor, according to Pierre LeBrun. There’s a distinct benefit to waiting longer, according to this anonymous governor.

“If the NHL tries to come back in May or June and there’s a positive test, it shuts down the season again. Wait as long as you can, is this governor’s opinion,” said LeBrun. “It doesn’t mean that this global pandemic will be done by August, but perhaps, hopefully, there are drugs in place or a better medical situation to deal with positive tests. He’s all in favour — he has shared this idea with commissioner Gary Bettman and he hopes that Gary Bettman continues to have an open ear to this type of idea.”

Waiting longer is the safer option from a health standpoint and it provides a little more certainty for the players (and fans). There’s another consideration, however: money.

“Waiting longer allows you to potentially play in front of full buildings right from the start,” said Seravelli. “The players don’t want to be playing a Stanley Cup that’s going to be awarded in front of an empty building. In addition to that, that would all maximize revenue: you get as many games as you can to finish out this season and then you get a full slate next year.”

Should maximizing revenue be a major concern for the players and the NHL in this situation? From a self-interested standpoint it makes sense: the lower revenues caused by the suspended season would affect the salary cap, which affects the earnings of players. The NHL and its teams, of course, are always interested in making as much money as possible.

Expecting full buildings on July, August, and September is either optimistic or naive. Perhaps fans, eager to attend a hockey game again, will stream to games in the middle of summer. Or perhaps they’ll still steer clear of big events and mass gatherings, fearful of another outbreak, or stay outside in the sunny summer weather.

It wouldn’t be surprising to see a season that restarts in July could still play in front of empty buildings, with bizarrely silent playoffs in August and September.

That would be very strange, but so is the idea of playoff hockey during the hottest months of the year. When you’re facing an unprecedented situation, it needs to be met with an unprecedented plan.

Canucks commit to helping part-time employees "based on individual need" during NHL stoppage due to COVID-19
Mar 13, 2020 5:29 PM
Comments
We welcome your feedback and encourage you to share your thoughts. We ask that you be respectful of others and their points of view, refrain from personal attacks and stay on topic. To learn about our commenting policies and how we moderate, please read our Community Guidelines.