Quinn Hughes is quietly dominating the qualifying round

The Canucks' rookie defenceman isn't playing like a rookie at all.

It takes an incredible amount of effort to make something difficult look effortless. Anytime anyone makes something look easy, in any field, it’s guaranteed that person has spent countless hours refining that skill. Difficult hours.

That’s how Quinn Hughes plays hockey, with a sense of casual ease that can only come through endless hours of practice and preparation. Whenever he takes the ice, it’s remarkably easy to forget that he’s still just a 20-year-old rookie. That’s been particularly true in the Canucks’ qualifying round against the Minnesota Wild.

Perhaps that shouldn’t come as a surprise. Hughes has handled every transition to higher levels of hockey with aplomb. He excelled as a 17-year-old freshman at the University of Michigan after a stellar draft year in the USHL. He scored three points in his first five NHL games at the end of the 2018-19 season. And, this season in his rookie year, Hughes led all rookies in scoring with 53 points in 68 games, the most points for a rookie defenceman since Nicklas Lidstrom, despite the end of the regular season getting cancelled.

The last two defencemen that led all rookies in scoring are both Hall-of-Famers: Brian Leetch and Bobby Orr.

If that’s the kind of company Hughes is keeping, it should be even less surprising that he’s immediately excelling in the postseason. It also helps that he had an unprecedented four-and-a-half month break between the end of the regular season and the playoffs.

"Maybe the four months here is the blessing in disguise for me, because I feel really strong now," said Hughes heading into training camp. "I think that I can perform better in the playoffs now than I would have three and a half months ago."

In a way, Hughes isn't really a rookie anymore.

“I kind of feel like I’m headed into my sophomore year now,” said Hughes to Sportsnet’s Iain MacIntyre heading into the playoffs. “I’m stronger, I’m better, I expect more from myself. But at the same time I’m walking into playoff hockey, so I’m modest in the sense that I’m not sure what will happen. I feel confident that I can be a big part of the series.”

That confidence was not misplaced. Hughes has been the Canucks’ best defenceman and arguably their best player along with star centre Elias Pettersson.

On Thursday in Game 3, Hughes set a franchise record for points by a rookie defenceman in a playoff game, assisting on all three Canucks goals. His most impressive came late in the game to seal the victory, jumping up on a 2-on-1 with Pettersson and setting him up with a perfectly-placed pass.

Even that assist, however, looked incredibly casual for the young rookie. He never looks like he’s skating hard, even as he’s bursting down the ice with uncatchable speed.

Beyond the points — four in three games so far — Hughes has kept the puck moving in the right direction all series with both his stellar defensive play and quick transition game. His skating, an asset in transition, has also made him excellent in the defensive zone.

The Wild’s most dangerous player is Kevin Fiala, a sniper with quick hands and quick feet. While the Canucks have had some trouble shutting him down this series, they should consider using Hughes against him more often, given how he had no trouble keeping a tight gap on the Wild forward and stealing the puck in Game 3.

Most of what Hughes is doing is subtle — quick puck retrievals and short, smart passes to start the breakout — but it shows up in the numbers.

When Hughes has been on the ice at 5-on-5, the Canucks expected goals percentage (xGF%) is 56.13%, an indication of the scoring chances he’s helped create and prevent. Without Hughes, the results have been far less pretty: an xGF% of just 36.73%. Fortunately for the Canucks, Jacob Markstrom has been up to the task, keeping the Wild off the scoreboard entirely at 5-on-5.

The impact is obvious when you look at how the seven players that have seen the most ice time with Hughes at 5-on-5 have performed with and without him on the ice. Corsi, which is simply the ratio of shot attempts for and against, makes it pretty clear: when Hughes is on the ice, he helps his teammates out-shoot the opposition; when he isn't on the ice, the Canucks have struggled. 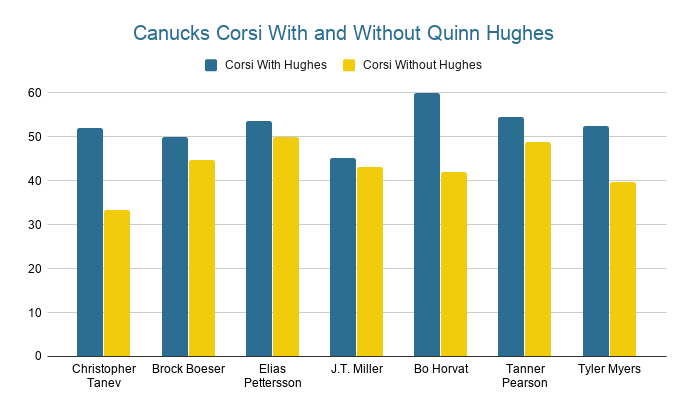 Unsurprisingly, head coach Travis Green has endeavoured to get Hughes on the ice at 5-on-5 as much as possible. He leads the Canucks in 5-on-5 ice time, playing 41 minutes even. Including his time on the power play and other situations, Hughes is averaging over 23 minutes per game.

For all the talk that young players need to experience the postseason to know what it takes to win in the playoffs, Hughes hasn’t looked like he needs that experience at all. Or, to put it another way, with the way he plays, it looks like he’s played through a dozen playoff series and already knows exactly what it takes to win.

It’s not like Hughes hasn’t played in big games before. He has two medals from the World Junior Championships and a bronze medal from the World Championships, where he played against men when he was just 18 years old. A big stage has never fazed him, but then again, nothing at all seems to faze him.

Now what remains to be seen is whether that quiet confidence that has carried Quinn Hughes this far can also carry the Canucks deep into the playoffs.