There’s a lot of drama surrounding the Vancouver Canucks right now but the team’s biggest problems, at least on the ice, remain on defence.

The Canucks have given up the third-highest rate of goals per game in the NHL this season. The team has given up fewer than three goals in a game just four times out of 25 games.

That defence is such an issue isn’t much of a surprise given that general manager Patrik Allvin essentially did nothing to address the defence in the summer. Just before the season started, Allvin acquired Riley Stillman, who has been abjectly awful, and then traded for Ethan Bear a couple of weeks into the season.

Bear has been a nice addition to the team’s top four but the defence as a whole still isn’t great, partly because their two highly-paid veterans, Oliver Ekman-Larsson and Tyler Myers, aren’t performing up to their hefty salaries.

The defenceman that was supposed to be the team’s biggest addition was Jack Rathbone. The Canucks’ top prospect defenceman was meant to graduate from the AHL this season and provide some puck-moving ability to the third pairing to aid in the team’s woeful breakouts.

Instead, Rathbone has played just six games with the Canucks this season and is now back in the AHL.

Rathbone has turned the puck over a ton

To look at why Rathbone hasn’t been able to stick in the lineup and what the Canucks’ overall issues are on defence, I’m going to turn to the statistics being tracked this season by Cam Charron.

Charron recently worked for the Toronto Maple Leafs in their analytics department. This season, he’s hand-tracking the same sorts of statistics for Canucks games that he would have tabulated for the Leafs and making them available to the public (for a small subscription fee).

Here are the statistics for the Canucks defencemen that have played at least five games this season, sorted by turnover percentage — the percentage of defensive zone touches that result in turnovers.

That’s a major issue for a player whose skillset was supposed to help the Canucks with their breakout issues.

There is a positive side to Rathbone’s game: when he exits the zone, whether with a pass or his skates, it’s with control of the puck more often than not. His controlled exit percentage of 56.0% is third-highest among Canucks defencemen. That’s not all that comforting, however, as he has the second-lowest rate of zone exits on the team.

Combine that with Rathbone’s issues in defensive coverage and it’s an ugly combination, as illustrated by the heatmap of shots against when Rathbone is on the ice at 5-on-5 via HockeyViz. 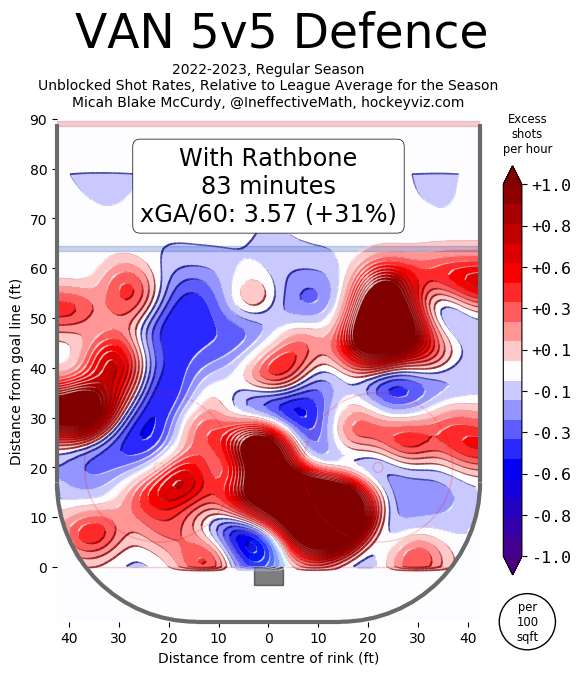 In other words, the biggest reason why Rathbone isn’t in the NHL right now is that he’s struggling with exactly the thing that the Canucks need him to be good at: transitioning the puck up ice.

There are plenty of other interesting tidbits to glean from Charron’s data. It is perhaps surprising that Ethan Bear has the second-highest turnover percentage among Canucks defencemen, just a tick below Rathbone.

More troubling is that Bear has the lowest percentage and rate of controlled zone exits. When he gets the puck out of the defensive zone, it’s typically off the boards and out or a chip into the neutral zone.

Where Bear excels is in retrievals, which Charron wrote about for The Athletic. He is excellent at using his mobility to beat forecheckers to dump-ins, then get body position on them to move the puck to a teammate.

The troubles for Bear begin after that initial retrieval. His puck management is seriously suspect, as he turns the puck over far too often and struggles to move it to teammates on exits.

The difference between Bear and Rathbone is that Bear is significantly better at in-zone defence.

The odd case of Riley Stillman

One of the oddest elements of these numbers is that Stillman has the lowest percentage of turnovers and the second-highest rate of controlled zone exits, behind only Quinn Hughes in the latter statistic.

For Stillman, a parallel can be drawn to baseball and defensive statistics. One of the most commonly-tracked statistics in baseball and the only one directly related to fielding is “errors.” When a player in the field makes a mistake — misses a pop fly, boots a ground ball, or throws the ball over the first baseman’s head — he is charged with an error.

The trouble is that errors aren’t really a great metric for measuring how good a player is defensively. If a shortstop only makes plays on balls that are hit directly to him, he’ll likely end up with very few errors. Meanwhile, another shortstop that sprints and dives for balls that are hit dozens of feet away from him might make more mistakes overall and get charged with more errors but would actually have a greater impact on the game defensively than the shortstop that made very few errors.

We can hypothesize, then, that Stillman doesn’t get to the puck to touch it unless it’s easy and he’s unlikely to make a mistake with it. He doesn’t attempt a zone exit unless it’s an easy exit and it will be with control.

Still, you have to wonder if the Canucks are tracking similar statistics and using them as justification for keeping Stillman in the lineup.

There are many other things that could be gleaned from this data but let’s take a moment to appreciate the excellence of Quinn Hughes.

It comes as no surprise that Hughes leads the Canucks’ defence not only in the number of zone exits per game by a wide margin but also the percentage of those exits that are with control of the puck. It’s a tremendous strength of his game.

Moreover, Hughes gets touches on the puck at a significantly higher rate than his fellow defencemen and yet has the third-lowest percentage of turnovers.

His 11.3% turnover rate is still a tad on the high side, which matches the eye test. Hughes hasn’t been quite as crisp and clean in his puckhandling and passing as we’ve typically seen from him so far in his career and there has been speculation that he’s playing through an injury — he has missed four games with a lower-body injury so far this season.

It’s troubling, of course, that the majority of the Canucks’ defence corps has a higher turnover percentage than Hughes.

Ekman-Larsson’s turnovers are somewhat forgivable given his high rate of touches in the defensive zone, but Myers is a concern. In addition, both Myers and Ekman-Larsson have a low percentage of controlled zone exits.

The Canucks’ issues on breakouts come into focus when you look specifically at the rate of controlled exits per game: Hughes has averaged 4.2 controlled zone exits per game this season; no one else on the defence is averaging more than 2.3.