What are the short and long-term salary cap implications for the Canucks’ offseason?

The Vancouver Canucks were facing a salary cap conundrum heading into the 2021 offseason.
Aug 5, 2021 4:31 PM By: Daniel Wagner

The Vancouver Canucks were facing a salary cap conundrum heading into the 2021 offseason. The origin of the quandary was multifaceted — a combination of bad contracts, dead money from Roberto Luongo’s salary recapture, and the flat cap created by the COVID-19 pandemic, not to mention the two biggest stars on the team, Elias Pettersson and Quinn Hughes, needing new contracts.

Canucks GM Jim Benning said he would be aggressive in dealing with the dilemma, promising he would be active in trades, free agency, and buyouts. He delivered on that promise, slicing away problematic contracts with bold moves and adding key players at forward, defence, and in net.

The question is, did Benning actually deal with the problematic cap situation or did he just kick the can further down the road?

Let’s start with the short-term, where the Canucks definitely created some cap flexibility for next season.

They shed the team’s worst contract — Loui Eriksson’s $6 million cap hit — in a blockbuster trade with the Arizona Coyotes, also moving out Jay Beagle, Antoine Roussel, and their combined $6 million cap hit in the process. That’s $12 million cleared off the cap in one trade.

That said, they also took back a decent amount of money, with Oliver Ekman-Larsson and Conor Garland coming back from the Arizona Coyotes. Even with the Coyotes retaining a percentage of Ekman-Larsson’s contract, he still has a $7.26 million cap hit and Garland’s new contract with the Canucks came in at $4.95 million.

The combined cap hits of Ekman-Larsson and Garland come in at $12.21 million, so that immediately takes up the $12 million cleared in the trade and more. Since the Canucks could have buried Eriksson in the minors and possibly Beagle and Roussel as well, they didn’t save any money at all.

The upside, of course, is that the Canucks get a top-six winger and a defenceman they can play in their top-four for their money instead of bottom-six forwards.

It still meant, however, that they were in a tight spot with key restricted free agents to sign, most importantly Pettersson and Hughes, but also trade acquisition Jason Dickinson and prospect defenceman Olli Juolevi.

The Canucks cleared another $5.95 million by trading Nate Schmidt to the Winnipeg Jets for a third-round pick, but buyouts were also necessary. Buying out Jake Virtanen and his $2.55 million per year contract was an obvious choice but buying out Braden Holtby was a little harder to swallow. The Canucks tried to trade Holtby but no one wanted him at the full freight of his $4.3 million cap hit and the Canucks reportedly didn’t want to retain more than $500,000 of his salary.

Still, with the Schmidt trade and the buyouts, that gave the Canucks another $12.25 million in cap space. They filled some of that up with free agent signings to replace those players: $3 million for Travis Hamonic, $2.5 million for Tucker Poolman, $1.5 million for Jaroslav Halak, and $850,000 for Luke Schenn.

They’ll need the extra bit of cap space they created.

What cap space remains for Pettersson and Hughes?

According to Benning, one reason why they made all of those moves was to be prepared for the possibility of an offer sheet for Pettersson.

“We’ve created a lot of cap space, so if there’s an offer sheet or anything, we’re going to match it on Petey,” said Benning. “That was part of why we did that.”

Here’s a prospective roster using CapFriendly’s Armchair GM feature. It has 20 players including Micheal Ferland, who will be put on long-term injury reserve at the start of next season. The Canucks need to have him on the roster with the team as close as possible to the salary cap to get the full cap benefit of him going on the IR list. 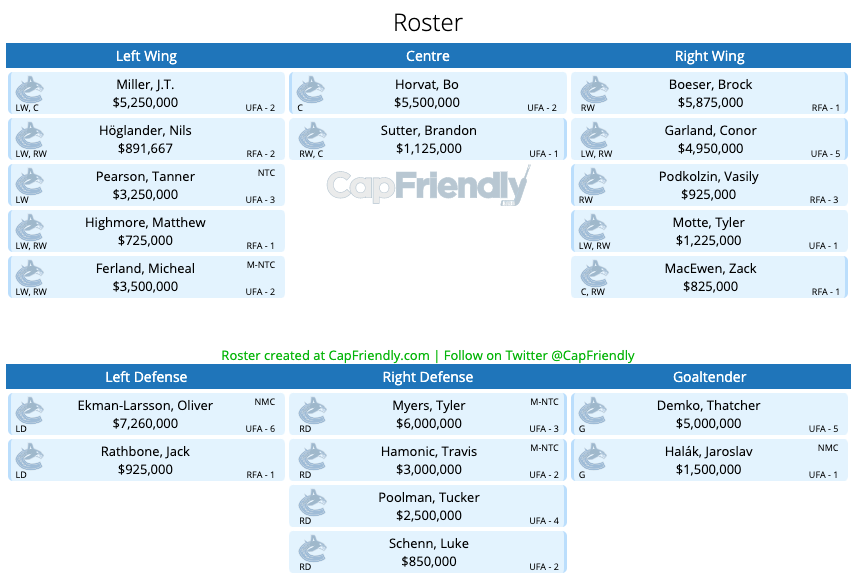 With this roster, the Canucks have $16,189,341 remaining in cap space to sign Pettersson, Hughes, Dickinson, and Juolevi. There’s a little leeway here where the Canucks can assign Nils Höglander, Vasily Podkolzin, and Jack Rathbone to the AHL prior to placing Ferland on LTIR, then call them up immediately after.

Evolving Hockey’s contract projections predict a three-year deal worth $2.837 million per year for Dickinson and a one-year deal worth $938,700 for Juolevi. If we accept those predictions, that leaves a little over $14 million to re-sign Pettersson and Hughes.

Long-term, that could lead to a very expensive third contract for one or both players, but we’re focused on the short-term and the Canucks will be able to re-sign both players.

The 2022-23 season is where things get interesting.

While there is talk that the salary cap could rise by $1 million next offseason, there’s good reason to be skeptical. NHL commissioner Gary Bettman has previously suggested that the league could have a flat cap through the 2025-26 season as part of the league’s four-year CBA extension.

“The salary cap is basically going to be flat until we recover the overpayments through the escrow that we've built up both in the return to play from last season, which obviously had to be concluded under different circumstances, and this season we're obviously... there's a major escrow building up because of the fact that there's no attendance,” said Bettman back in March.

In other words, the Canucks certainly shouldn’t bank on the salary cap going up next year, though it certainly would be nice if it did.

Setting that aside, there will be consequences for the Canucks’ 2022-23 season because of the moves they made this offseason. Obviously, there’s the cap hits of players signed for longer than one year, such as Ekman-Larsson, Garland, Hamonic, and Poolman but there are other consequences for their cap-clearing moves.

The buyouts of Virtanen and Holtby will have a higher cap hit in the 2022-23 season because of how those contracts were backloaded. Virtanen’s buyout will carry a $500,000 cap hit, while Holtby’s will be $1.9 million. That’s $2.4 million of dead cap space.

More dead cap space will be added to that if Jaroslav Halak hits his performance bonuses. Halak can have performance bonuses in his contract because he’s over 35 but the overage created by Ferland’s LTIR can’t be used on those bonuses. Instead, they’ll carry over to the following season.

That’s a total of $3.9 million in dead cap space, but that’s something with which Benning says he’s comfortable.

“After this year, we lose Luongo’s $3 million on our cap,” said Benning. “So it’s not perfect, of course, we wouldn't like to have that situation, but I think trying to make our team as good as we could this year and as competitive as we could, that’s something that we looked at.

“In any given year, you look at any team, and there could be some dead money on, but the fact that we’re losing Luongo’s money next year I think played a part in accepting the fact that we’re going to have a little bit of money on the following year.”

In other words, the Canucks will be replacing the dead money from Luongo’s cap recapture penalty with dead money from buyouts and bonuses. Certainly, $3.9 million would buy a pretty good player in free agency next offseason but Benning and the Canucks were focused on making the team better for the 2021-22 season.

What cap space will remain for Brock Boeser?

The Canucks will have one significant player to re-sign in the 2022 offseason: Brock Boeser.

This was a key component of Boeser’s bridge deal when it was signed, as Boeser and his agent ensured a raise on his next contract.

Certainly, the Canucks could negotiate a long-term deal with Boeser at a lower cap hit, but he would always have the option of accepting his qualifying offer of $7.5 million on a one-year deal, then doing so again when that contract expires.

Boeser may very well be worth a $7.5 million cap hit in any case. He led the Canucks in scoring last season with 23 goals and 49 points in 56 games, playing every single game of the season for the first time in his career. That’s a 34-goal, 72-point pace over 82 games and he combined that with continued development on his well-rounded two-way game.

If Boeser gets anywhere near $7.5 million per year, that will make it difficult for the Canucks to make improvements elsewhere on their roster.

Here’s a potential roster for the 2022-23 season from CapFriendly, using a couple of assumptions — Pettersson and Hughes combine for a relatively conservative $14 million cap hit and Dickinson gets $2.8 million. 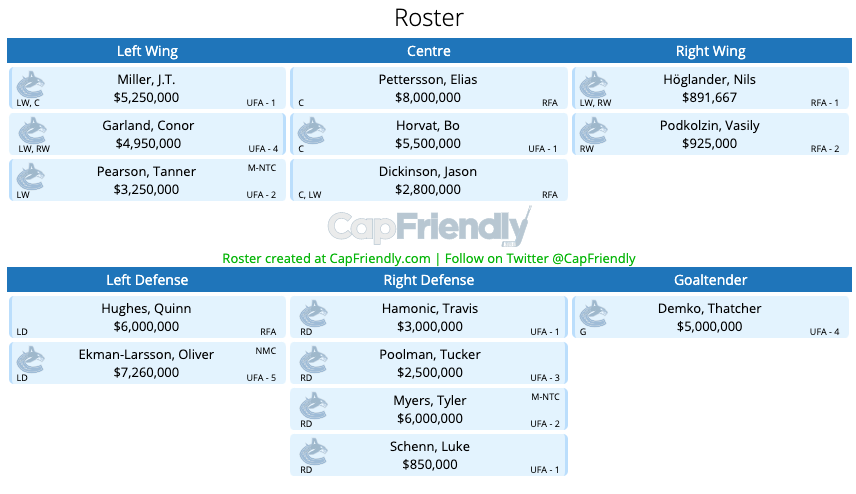 The above roster has a little less than $17 million in remaining cap space available to re-sign Boeser, fellow restricted free agents like Jack Rathbone and Michael DiPietro, and fill out a total of 8 roster spots.

A $7.5 million cap hit for Boeser would leave around $9.5 million in cap space for 7 roster spots. That’s enough to sign a few players at around $1 million per year and fill out the rest with deals at or near league-minimum. It’s certainly not enough to make significant upgrades to any part of the roster.

The bargain: short-term vs long-term

The other option was to eat their bad contracts for one more year — Eriksson, Beagle, Roussel, and Holtby all had just one year remaining — and have a wealth of cap space to work with in the 2022-23 season. That, however, would have likely meant accepting another season of mediocrity in 2021-22.

Was the bargain worth it? Maybe. It’s entirely possible that the Canucks are one of the better teams in the Pacific Division next season. Their defence is a major question mark, but their forwards should be better with the additions of Garland and Dickinson, and the Pacific could be the weakest division in the league.

If the Canucks are good enough to make the playoffs next season and maybe even win a round or two, no one will be too worried about making major improvements to the roster in the following offseason.

On the other hand, if the Canucks are a bubble playoff team and get knocked out in the first round or, worse, miss the playoffs entirely, the long-term cap consequences of this offseason could be disastrous.