The combo of Pettersson and Hughes used to be a cheat code — what happened?

Last season, Pettersson and Hughes were one of the most dangerous combinations in the NHL at 5-on-5; this season, they're mainly dangerous to the Canucks.

Elias Pettersson and Quinn Hughes are the two best and most important players on the Canucks. One is a franchise forward — a superstar centre with tremendous impact at both ends of the ice — and the other is the true, number-one defenceman the Canucks have never had before.

Only, that’s not how they’ve played so far this season.

There are some bright spots, certainly. Pettersson scored a gorgeous goal on the power play on Tuesday night, a bardown rocket of a wrist shot that was impossible to stop. Hughes is leading all NHL defencemen in points with 14 in 13 games, an accomplishment that Canucks fans would typically be crowing about.

The issue is those gleaming silver elements are lining an awful lot of clouds.

It’s not just that Pettersson had a five-game point drought to start the season, but that he and his linemates are struggling to control puck possession the way they did last year. The only Canucks forwards with a worse corsi percentage — the ratio of shot attempts for and against when a player is on the ice at 5-on-5 — are J.T. Miller and Antoine Roussel.*

Miller’s struggles this season play into Pettersson’s. Miller’s passes have been off the mark all season, leading either to turnovers or forcing a teammate to take a pass off the skate or backhand instead on the forehand in stride. But that doesn’t explain all of Pettersson’s struggles.

Pettersson’s been on the ice for the highest rate of shots on goal against at 5-on-5 on the Canucks, apart from Brogan Rafferty and Travis Hamonic, who have only played a combined 6 games. Last season, opposing teams averaged 28.8 shots on goal when Pettersson was on the ice at 5-on-5; this season, they’re averaging 41.0.

That’s a massive difference and a troubling one. One of the key elements that has set Pettersson apart from other young stars is his defensive impact, but that has been missing this season.

The Canuck on the ice for the second-highest rate of shots on goal against at 5-on-5? Quinn Hughes.

Hughes is struggling defensively in ways we never saw him struggle last season. He’s getting beaten to the outside fairly regularly, which should not be happening with his elite mobility. As a result, he’s been on the ice for the highest rate of high-danger chances against on the Canucks.

Last season, opponents averaged 11.1 high-danger chances against when Hughes was on the ice at 5-on-5. This season, it’s up to 17.8. That’s not just highest on the Canucks, it’s highest among all NHL defencemen.

Among NHL skaters with at least 100 minutes at 5-on-5, Pettersson and Hughes have been on the ice for the second and third-highest rates of shots on goal against.

This season, it’s like other players complained the Pettersson/Hughes combo was OP and the developers nerfed them. 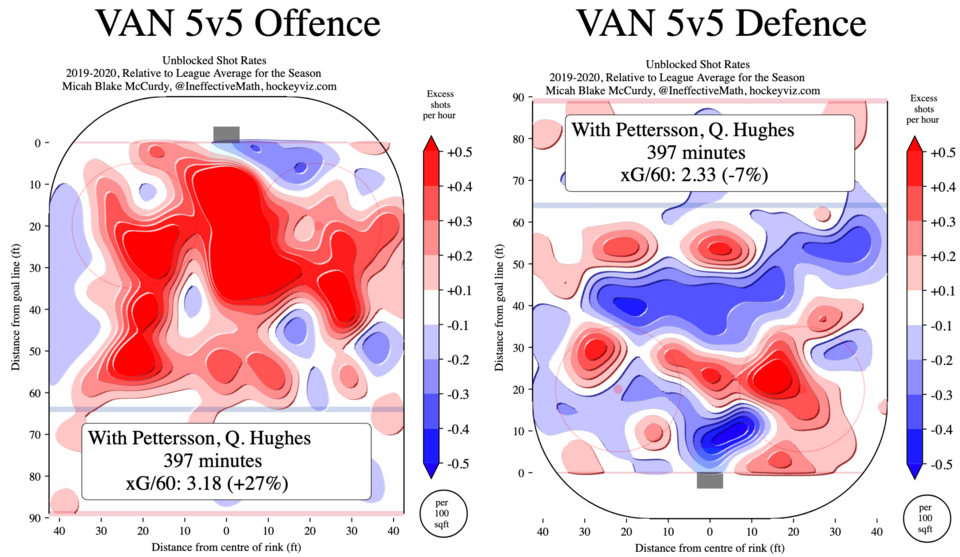 Elias Pettersson and Quinn Hughes at 5-on-5 in the 2019-20 season via HockeyViz.com

As you can see, the Canucks created a ton of shots from dangerous areas with both Pettersson and Hughes on the ice last season. There is lots of red, which means lots of shots, from the middle of the ice and inside the faceoff circles.

Defensively, the Canucks allowed very little from around the net when those two were on the ice at 5-on-5, though shots from between the hashmarks and the right faceoff circle were above average.

Here are the same heatmaps for this season so far. You might notice a slight difference. 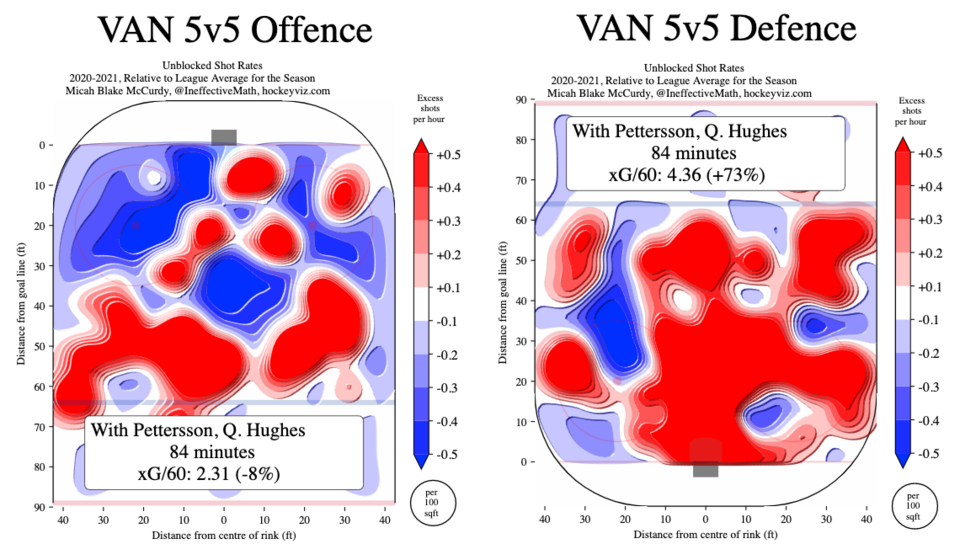 Elias Pettersson and Quinn Hughes together at 5-on-5 in the 2020-21 season via HockeyViz.com

The defensive zone is the Red Sea, but there’s no parting it: it’s concentrated right in the middle of the ice and all around the net. So far this season, when both Pettersson and Hughes have been on the ice at 5-on-5, opponent shots have been a whopping 73% more dangerous than average.

On the offensive end, the Canucks have scattered lumps of areas with an above average number of shots, but overall, Canucks shots have been 8% less dangerous than average with Pettersson and Hughes.

In many ways, these heatmaps are just confirming what everyone can see on the ice. Despite their point totals, Pettersson and Hughes are not generating scoring chances for the Canucks like they did last season and are giving up a ton defensively. This is not a recipe for success.

The one positive is that Canucks fans know what Pettersson and Hughes are capable of and it’s still early in the season. These ugly statistics are from a sample size of 13 games and can be turned positive in the weeks and months to come. Canucks fans just have to hope that they figure out their games quickly, because the team will only go as far as their two best players will take them.

* All statistics via Natural Stat Trick and adjusted for score and venue, unless otherwise noted.