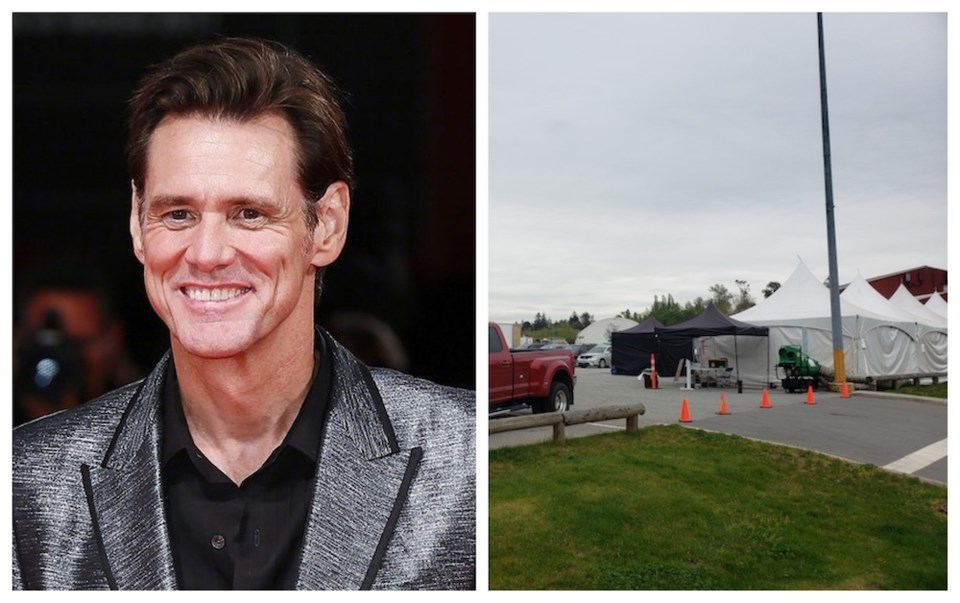 Sonic the Hedgehog 2 is filming in Metro Vancouver this week at the Cloverdale Fairgrounds and stars Canada-born actor Jim Carrey as well as James Marsden.Photo via jimcarreyhere / Instagram and @Paradeguy / Twitter

Sonic the Hedgehog 2 is filming indoors in Metro Vancouver this week at the Cloverdale Fairgrounds.

Fans shared several photos from the set over the past week. Katia Stano told Vancouver Is Awesome that the film set has taken over Fort Langley's Glover Road. She added that it "looks like a military invasion with helicopter and tanks included!"

Paul Orazietti, executive director of the Cloverdale Business Improvement Association, took to Twitter Wednesday (April 28) to say that filming would take place this week at the Cloverdale Fairgrounds. He added that "[B.C.] is providing hundreds of high-quality jobs in Surrey and Langley while helping out our local economy."

Kathleen Yang took to Twitter to say her partner had waited in line at the Cloverdale drop-in clinic for roughly two hours. The "estimated wait time [for] folks arriving now looks to be about three to four hours, but this is just their guess," she added.

My partner has been waiting in line for a vaccine at Cloverdale rec centre for about 2 hours. Estimated wait time folks arriving now looks to be about 3 to 4 hours, but this is just their guess. pic.twitter.com/DgtRphhr1y

John Cena celebrated his birthday in Vancouver last week and a couple of fans gifted him a balloon. People have also photographed actors filming popular TV shows such as Riverdale, Batwoman, and Superman & Lois, just to name a few.

But not everyone is thrilled these actors flew into town to work.

In the wake of soaring coronavirus (COVID-19) cases, many locals question why these actors--many of whom are American--are permitted to work in B.C. Of course, there isn't a rule against flying into the country for work or for recreation, but the pressure is mounting on the federal government to create one.

Numerous people commented on a couple of recent stories Vancouver Is Awesome shared about American actors filming in the region. Some of them said the film industry has gone to great lengths to protect their employees and therefore doesn't pose a threat to public safety. However, others feel that their work isn't essential and shouldn't be allowed to continue during the pandemic.

'What a joke': Vancouverites react to American actors filming in the city in the wake of soaring COVID-19 cases
Apr 27, 2021 5:18 PM
Comments